The Control of Nature

While my column is washing, and my brain is fried, I should finally write this entry ...

A while back, right around the time of Katrina, I read a spectacular book, The Control of Nature by John McAfee (Amazon site).

When man's interests conflict with an ever changing environment, what does man do? He/she fights change.

(All images were hijacked from maps.google.com.)

The Army Corps of Engineers vs the Mississippi River.

As time goes on rivers carry sediment from their sources to their deltas. The sediment settles, the riverbed rises until the river overflows and takes a new steeper route to the sea. But not the Mississippi. After the war of 1812, the Army Corps of Engineers was commissioned to protect New Orleans and the mouth of the Mississippi from future sieges. Eventually the Army Corps took control of the whole river. From Baton Rouge to the big easy, millions now depend on this great river, but the river wants to switch course to the Atchafalaya. Old River (see map) connects the Mississippi to the Atchafalaya, is now dammed. Walls that are longer, wider and taller than the great wall of China, hold the Mississippi in it's current itinerary. The elevated river has become an aqueduct. To read this part of the book, click here. 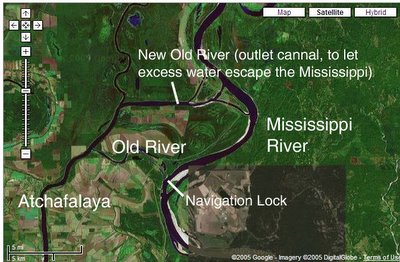 Vestmannaeyjar, Iceland vs the Mid-Atlantic Ridge

Your home is right where two tectonic plates rip apart. A nearby volcano erupts, the lava is heading to your town and the only harbor in your country. What do you do? Water the lava of course (or as the locals call it, "pissing on the lava"). And those crazy Icelanders managed to stop the lava in the nick of time (see map). This crazy tale is too incredible to believe. The Icelanders were even walking on the lava to water it from the top. If the lava-watermen stood still, their boots would catch on fire. At some point a chunk of the volcano (Eldfell) broke off and drifted on the lava towards their town. Migrating Mountains?? Read the book to find out what happened next. Here's a nice website on the whole affair. 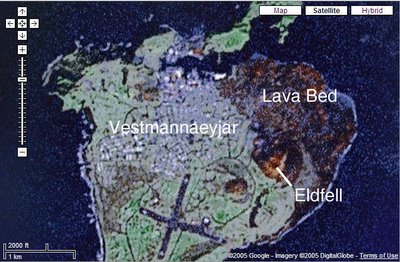 Los Angeles vs. the Sierra Madre

You city fills an entire valley and is creeping towards an incredibly high (and young) mountain range to the north. Due to tectonic plate movement (see arrows) this mountain range is growing. Every couple of decades avalanches from the growing mountains turn into mud slides that engulf whole sections of the city. But that's not all. The climate is very arid and the vegetation is highly combustible. Driven by evolution, many plants emit flammable oils to encourage the scorching of themselves and competing plants turning these new mountains into fire drenched infernos every 10-30 years. Once the area is reduced to ashes, their heat resistant seeds sprout. Mudslides, wild fires, and still people want to live in L.A.? 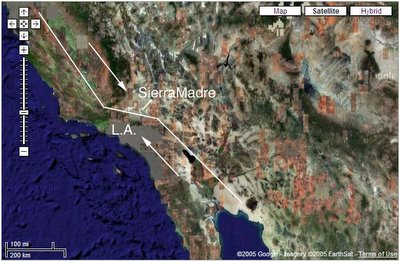 Having examined these 3 examples, I had many questions. But one principle stood out,

Look at the Kyoto protocol. Look at our unsustainable business practices. What will happen if the sea levels rise? It looks like instead of moving our coastal cities, we will erect huge dikes. We humans use technology to find quick fixes ... but such a strategy may lead to our eventual downfall.

Keeps on Rolling - but where. Is this the year Ole Miss decides to break loose? Back in '08 I noted that conditions were lining up for a risk of the Mississippi breaking out of its path, but that it was a low probability scenario/ Well, 2011 is looking much worse and there is now low probability…

Stone, Steam and Sand: A Geologic Photo Tour of Southwest Colorado, Part I

The San Juan Mountains As we traversed Southern Colorado a few weeks ago, my son declared we were in a rainforest. Seeing as how the region is known for arid canyons, pinon trees and cliff houses, I felt the need to correct him. Still, as we crossed the continental divide at Wolf Creek Pass, it was…

The Day the Mississippi Flowed Backwards

OK, this has nothing to do with cognitive science, but today's quake felt throughout the southeast reminded me of a little history that some people may not be aware of. In Tennessee, there is only one large natural lake, Reelfoot Lake, in the far western part of the state just south of Kentucky,…

Back in the days when Eruptions was on Wordpress, I held a vote about what volcano should be the next to be profiled on this blog. The winner was Mt. Hood in Oregon, and after much waiting, the profile is here. I will actually be out of town until Monday doing some house shopping in this little…

"We humans use technology to find quick fixes ... but such a strategy may lead to our eventual downfall."

Only if we stop doing it. Change is constant and eternal. We solve hard problems so that we can continue to be alive in the future to solve more hard problems.

All living things spend an enormous amount of energy just maintaining their own structure. That's part of what it means to be alive. Maybe I should stop wasting so much of my energy repairing my DNA molecules and just let nature take it's course, eh? Don't worry, I will someday. When we stop expending constant energy to resist the second law of thermodynamics this is called "death."

I've posted around here a bit about this. Green ideology seems to me to be a kind of utopian idealism that's looking for some ideal state of perfect unchanging balance. It seems to be a projection of ancient religious/mystical forms of idealism into a secular framework. I think it's a religion that has managed to sneak into science by not calling itself one and by not looking like any of the usual ones that we're used to.

I do not think that a steady state of balance is achievable for any extended period of time. I see examples that look like this in nature, but then I realize that it's an illusion generated by the fact that I am only viewing a freeze-frame relative to natural and geologic time. View nature at the scale of geological time and it looks like a raging storm of constant change.

If you don't like growth, do the following: take all your computers, electronic gizmos, books written after 1900, new forms of music (everything but folk and classical), new forms of art (everything but the classical forms), movies, scientific papers, etc. and burn them. They're all products of the chaos of 20th century change. If we had achieved a steady state of "harmony" in the 19th century none of these things would have had any reason to be created.

I'm all for efficiency improvements, cleaner air, more efficient land use, conservation and prudent use of natural resources, reductions in pollution, etc. All these seem to be just common sense. But I reject the romantic idealist philosophy behind green ideology for much the same reason that I reject religious conservatism and other similar ideologies.

The reason I've posted on this around here a bit recently is that I see this ideology mixed in with scientific articles on these sorts of subjects and I'm rather amazed that people don't realize it's there or realize that it's a form of religious conservatism.

McPhee is the sort of accessible, readable, yet not dumbed-down science writer we need more of. In Suspect Terrain is also a great read.

Anything John Phee writes is worth reading, even if you don't think you're interested. He makes is fascinating, affecting, and memorable.

My Year in a Picture

December 13, 2009
There's a battle going on out there. A battle for trust. Do you get the H1N1 vaccine? Is global warming true? Will you go to hell? Is the free market the best way to run an economy? How to answer these questions? The conventional wisdom is that all members of our society should get informed. Many…

Slicing a famous brain, streamed live on the web

December 4, 2009
I'm siting at my breakfast table when I read this in the NY Times science section: Dissection Begins on Famous Brain The man who could not remember has left scientists a gift that will provide insights for generations to come: his brain, now being dissected and digitally mapped in exquisite detail…

December 3, 2009
The graph is from Are there too many PhDs? at Mendeley Blog In the U.S., we are constantly hearing about how the country is falling behind in science. We need more scientists to fill all of those jobs we want to create. And the cure to that is to fund more PhD programs! Yet, when you ask graduate…