The cultural critic Walter Benjamin, in his seminal 1936 essay The Work of Art in the Age of Mechanical Reproduction, argued that the "aura" of a work of art, that sense of special awe and reverence we feel, being in its presence, isn't inherent to art itself. Rather, it's a side-effect of its exclusivity, restricted exhibition, authenticity, or perceived value. With the age of "mechanical reproduction" (i.e. printed copies, films, and photographs), that aura disappeared, freeing art from its ties to the bourgeoisie and allowing mass audiences to, in a sense, "own" the work too. Take the Mona Lisa, for example, an image so completely burned into the collective retina that the experience of seeing it in real life is rarely more meaningful than a frantic photo-op. Why bother to stand around and look at the Mona Lisa when visiting the Louvre? You've already seen it a million times. What even is the Mona Lisa, at this point, other than an image retained in the minds of millions of people?

The average Louvre visitor generally spends about 15 seconds viewing the Mona Lisa. There are countless other images–ideas too–that share this aura-smashing cultural ubiquity. Who could give an unbiased critique of the Venus de Milo, or the Last Supper? Even the iconic "Earthrise" image of the whole Earth taken from space, which changed the world when it was first seen, is now little more than a bumper sticker. We always seek the new, in the arts, precisely because an overly familiar image conceals as much as it reveals; we become blind to the everyday. And the Mona Lisa trumps them all: by some unspoken consensus, it has always been the image with which the West represents its cultural legacy. It is easily the best known, quantifiably the most visited, and probably the most parodied work of art in the world. Now it holds the auspicious status of being the first piece of art beamed to the moon via laser.

The smiling Gioconda traveled nearly 240,000 miles in digital form from the Next Generation Satellite Laser Ranging (NGSLR) station at NASA's Goddard Space Flight Center in Greenbelt, Md., to the Lunar Reconnaissance Orbiter, a robotic spacecraft currently in low orbit around the moon. By transmitting the image piggybacked on laser pulses routinely sent to track the craft's position, the team achieved simultaneous laser communication and tracking–a first for one-way laser communication at planetary distances.

It seems we're due for an update of Benjamin's oft-cited essay. Perhaps The Work of Art in the Age of Optical Teleportation? Of course, the notion of flattening the complexity and totally specific context of a piece of art–in this case, 16th-century Florence–in order to transmit it, efficiently, across minds and generations like a winsome smiling cultural totem: well, it's not that different from using compression to reduce a painting to its simplest numerical essence.

In order to make the cosmic transmission, the Mona Lisa had to be converted from a 500-year-old oil painting into a teensy 152 x 200 pixel array, each pixel of which was converted into a shade of gray, represented by a number between zero and 4,095 (the first fifty, presumably, were especially exciting). Each pixel was transmitted by a laser pulse, with the pulse being fired in one of 4,096 possible time slots during a brief time window allotted for laser tracking. The result: a data rate of about 300 bits per second. Not great for an internet connection, but then again, we're talking about metamorphosing a priceless emblem of Western art into incorporeal units of measurement, destined to be launched on a river of light to a spacecraft hanging around the moon, so, not bad.

The glitches and errors caused by Earth's atmosphere were tidied up with Reed-Solomon correction, which is the same compression coding we use for CDs and DVDs. Conceptually, this is nothing new. After all, the Mona Lisa currently pulses around the planet in digital form, bandied about on vast fiber-optic lattices under the sea and across the globe, all day every day. You've loaded her image just now, decoding my low-resolution desktop file from your home computer. Presumably, in the future, moon colonists and astronauts will be able to perform similar feats from desktops linked to the near-space laser Internet. 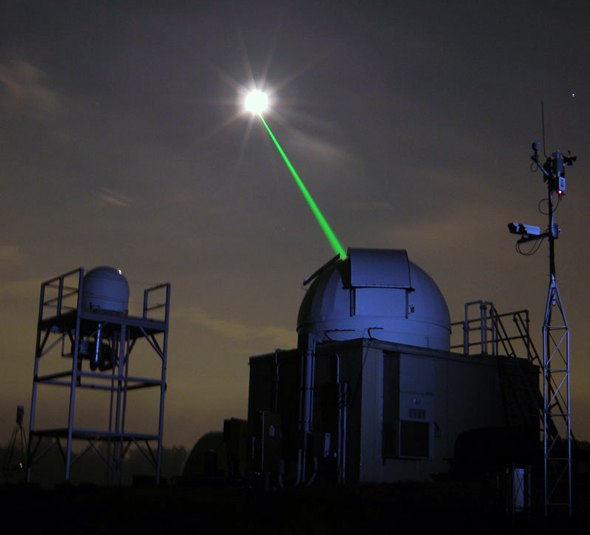 Walter Benjamin argues that the purpose of art can change over the years. An ancient sculpture or idol can begin its career as a cult object, central to a specific ritual use, and then grow to be appreciated aesthetically, historically, or forgotten entirely by different societies throughout time. "The uniqueness of a work of art is inseparable from its being imbedded in the fabric of tradition," he writes, "This tradition itself is thoroughly alive and extremely changeable." The purpose of the Mona Lisa, in 1503, was simple: it was a sign of wealth, of patronage, and had a practical function, as a portrait of the wife of a middle-class silk merchant. Later, after the vagaries of history displaced it from Italy to pre-revolutionary France, it served to represent monarchical power; it wasn't until the 20th century–after a highly-publicized theft and rediscovery, and lots of speculation–that it became the most famous painting in the world. That it started to belong to everyone. And, in suit, became a unit of communication itself.

Benjamin writes that "the instant the criterion of authenticity ceases to be applicable to artistic production, the total function of art is reversed. Instead of being based on ritual, it begins to be based on another practice–politics." Why did NASA choose the Mona Lisa to beam up to space? It's no simpler, technically, than any other image. The very specific and pointed choice of something so neutrally iconic is a political one: or, rather, a canny public relations move. Whether or not it intended to, NASA used the Mona Lisa as cultural shorthand. Even if you only read the headline of this story, the essential is communicated: we stand at the temporal zenith of an unbroken legacy of intellectual adventuring, we can draw lines of inquiry–after all, DaVinci was a consummate doodler of flying machines–through time, across boundaries, and into the bleeding edge of the present all while honoring those who came before us.