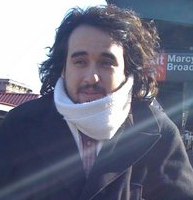 Sebastian Alvarado is a postdoctoral fellow in the Dept. of Biology at Stanford, with a research focus on epigenetics, as well as co-founder of the video game science consultancy group, Thwacke! Consulting. Thwacke offers scientific insight from a diversity of disciplines to aid in narrative design, world building, and ultimately creating believable content for the video game industry. Thwacke has consulted on video games including Wasteland 2  and Outlast.

What services does Thwacke provide?

We connect video game developers with academics to help make their medium more creative and immersive. Our services range from lectures and lab tours to writing documents that speculate a scientific principle into an interesting fiction. We also use some of our consultants trained in the behavioral sciences (neuroscience, psychiatry, etc.) to guide level design using a scientific understanding of human behavior.How did you first become interested in science consulting for video
games?

At the time, I was finishing my doctorate at McGill University in Montreal, where there's a vibrant game development community. This locale provided me with the added opportunity to playtest new games and supplement the humble salary of a graduate student. During the process, I got a chance to see how games are made and the thought that goes into them. I also happened to see a developer on wikipedia looking at the entry for DNA. My background was in molecular biology and it made me think that a short conversation would have saved time and avoided any misrepresentations of my field. After a  bit of planning and getting to know more developers, I realized there was value in bringing this type of novelty to the sci-fi genre in the industry.
How does developing science fiction from science fact help to improve
a game?
A very important aspect of certain games requires the player to be immersed into its narrative. As a result, anything that can bring  a player closer to the world the developer is creating makes a better video game. Our role in this process is to be creative outside of our own field, and bring  new and interesting ideas to support the plausibility of a fictional world. We've also found that our ideas are good source material for the creative leads on a project to inspire new directions for art, story, and level design.
How can gaming be applied to other areas, such as education?

We hope that our input on specific projects inspires an interest in science in  players. Most of our consultants chose their careers based on childhood inspiration from comic books, books, movies, and video games. We hope that being present in such a pervasive medium will achieve the same effect. Within this scope, we also curate our ideas to draw the most interest and reward for players, with individuals feeling smarter as they play. It’s the difference between a discussion about science that can engage an audience in a relatable fashion instead of boring them with mundane details.
Outside of mainstream game development, we are working on a few games aimed to primarily teach and educate, by aligning scientific concepts with novel game designs. So instead of trying to make a game about the immune system seem like 'pacman', we make a game that borrows dynamics inspired from our immune system to create a playable design. We hope this new approach to the educational game can  bring something valuable to both educational tools  in general and video games in particular.
What inspires you in your work?
Science! So that mainly narrows it down to our work at the bench and in the clinic. Every consultant for Thwacke is a scientist first, and communicator second. Our team members are active in their academic community making discoveries for their own discipline and they are encouraged to use Thwacke as a platform to advocate their field. We've also found that conversations with developers and understanding their vision serve as great 'guides' for our own creativity. They often give us the green-light on speculating what it would be like to be a mad scientist.
What is your vision for gaming in the future?

In all honesty, I have no idea. The games I played 10 years ago are very different than the games I play today. In my realm, I see games as excellent tools to conduct and crowd-source scientific research. For example, it's much easier to design a game that reaches 1 million patients than to invite 1 million patients into a clinic for questionnaires.  At the same time, I feel these same tools will be a catalyst for learning within player communities and schools. Outside of my realm, I have no idea but I can't wait to find out!
Sebastian discusses the science of  video games in the excellent video series "The Science of Games", hosted by Daniel Kayser, on GameTrailers.com.
Sebastian also joined our Kavli Contest advisors in a discussion about the Science of Monsters.