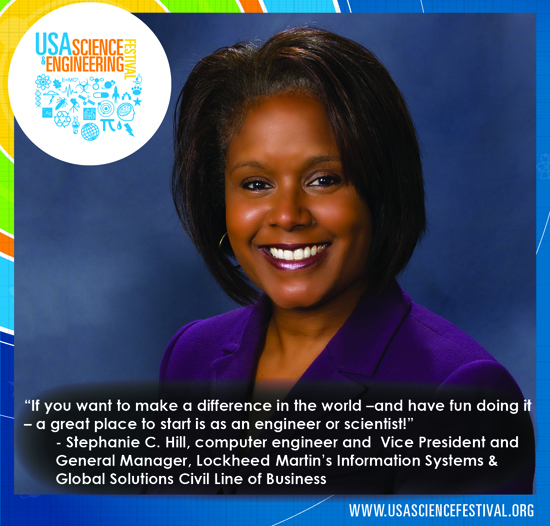 Vice President and General Manager of Lockheed Martin Information Systems & Global Solutions Civil line of business; recipient of the Black Engineer of the Year Award for 2014

Looking back recently on her lengthy and high-profile career at Lockheed Martin, engineer and executive Stephanie C. Hill said, "I've worked for Lockheed Martin for 27 years. Most of those years have been in the technological field, and I have never been bored. I have had the opportunity to make a difference in a way that I never imagined, and I want our young people to know that they can have a similar, rewarding experience in STEM (science, technology, engineering and mathematics)!

It has been this sense of professionalism and her interest in motivating others, especially minorities, in STEM that have hallmarked Stephanie's career and led her to being honored with the Black Engineer of the Year award at the 2014 BEYA STEM Conference in Washington, D.C., in February. The conference is hosted by the US Black Engineer & Information Technology magazine, the Council of Engineering Deans of the Historically Black Colleges and Universities, and Lockheed Martin Corporation.

But Stephanie is quick to add that she was fortunate to have influential role models of her own while growing up in Maryland, namely her parents, who taught their children to strive toward excellence, and to learn the importance of integrity, honesty and kindness. Her mother, Doris, is a retired kindergarten teacher, and her father, the late Honorable Harry A. Cole, was a trailblazer in his own right. Growing up poor during segregation, Stephanie's father shined shoes in order to earn enough money to enroll in Morgan State University where he later earned the honor of class valedictorian. He then went on to become the first black state senator of Maryland and afterward the first black judge on the Maryland Court of Appeals.

Stephanie's decision to enter the field of engineering was not an easy one after graduating with honors from the University of Maryland Baltimore County with a degree in computer science and economics. "I actually consider myself an accidental engineer," she admits with a smile. "I didn't intend to become an engineer out of college because I didn't really know what an engineer did. I didn't know any engineers. Nobody in my family was an engineer. I didn't have anybody, really, that was in my life to say, 'Boy, engineering could be a good career.' I just knew I was really good at math and tried to find something that would utilize those skills."

In her position, she leads approximately 10,000 professionals (in all 50 states and nine foreign countries) who are responsible for a wide range of information technology systems – from cyber security and finance to health care and space exploration.

Says Stephanie of her far-reaching job: "We do all kinds of things that range from air traffic management systems that control 60 percent of the world's air space to controlling 80 percent of the world's oceanic space. We help the National Science Foundation ensure that more than 700 scientists have everything they need to complete their valuable research in Antarctica. We also support a ground-breaking project that uses health data to help prevent the onset of diseases. This is what a STEM-based Career can do for us and for the world. "

Other Achievements: Stephanie joined Lockheed Martin in 1987 as a software engineer and assumed positions of increasing responsibility, including serving as Vice President of Corporate Internal Audit and Vice President and General Manager of the Electronic Systems-Mission Systems & Sensors, in Baltimore.

In addition to numerous professional affiliations, Stephanie is also active in the community, where she is passionate about engaging youth in STEM. In 2012, the Women of Color STEM conference recognized Stephanie for career achievement in industry, and the University of Maryland Baltimore County named her as Outstanding Alumna of the Year in Engineering & Information Technology. She is also the 2014 chair of 'A Night for the Children' Charity Gala to benefit The Children's Inn at the National Institutes of Health and the House of Ruth.

In Her Own Words: On what must be done to increase the number of scientists and engineers in the U.S. workforce, she says: "Since the minority population will be a huge part of the workforce, we must commit to sparking interest in those communities for science, technology, engineering and math fields. This is imperative -- not just because it's what is needed for my company's future success and for our nation's competitive edge, but also because it's the right thing to do."