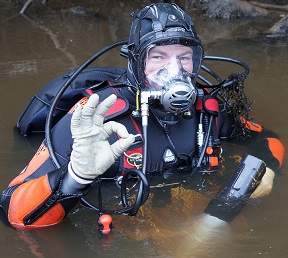 By Guest Blogger Jason Osborne
Explorer, Innovator, and co-founder of both Paleo Quest™, a non-profit citizen science organization, and SharkFinder™

When most people think about scuba diving, they envision coral reefs and colorful tropical fish. But for me and my fellow professional-amateur paleontologist Aaron Alford, this is not the case. As the cofounders of non-profit organization Paleo Quest, diving is a tool for us. It is a method we use to reach places most people wouldn’t dare to explore.

Imagine diving in a river with zero visibility and heavy currents – and throw in some submerged trees and the occasional alligator or bull shark for good measure. The swamp river systems we dive in along the Atlantic Coastal Plain may be dangerous, but they yield new scientific discoveries.

Our systematic approach to field exploration contributed to the birth of Paleo Quest, a research organization devoted to the advancement of paleontology and geology through research, exploration and science education. Aaron and I also developed SharkFinder, a citizen science program that allows students and citizen scientists the opportunity to search through fossil-bearing matrix found in swamp rivers to potentially discover the first occurrence of a species or a new species all together.

After four years, Paleo Quest is now globally recognized and has been cited in multiple tier-one journals, news articles and even a documentary. SharkFinder was recognized by the White House Office of Science and Technology Policy as one of the top citizen science programs in the country last year. I proudly accepted the White House Champions of Change award on behalf of SharkFinder last June.

In the past decade, my field research underwater has led to the discovery of multiple new species of prehistoric marine mammals and dozens of first occurrences of species. I’ve also helped identify new stratigraphic layers in geological time.

When traveling around the country engaging students in STEM education, one of the messages we drive home is that you need to take risks. Although we don’t encourage black water scuba diving or other life-threatening activities, we do ask students to push the limits of their minds.

Black water scuba diving can be very dangerous, however the results are incredibly rewarding. We know that diving in flood conditions doesn’t sound too appealing. But extreme currents rip out fresh fossil material and expose the surface of underwater fossil-bearing formations. When people ask us what it’s like to dive in bodies of water with such strong currents, I always tell them to imagine holding onto the front of a car that is going 65 miles per hour down a highway while wearing a spacesuit.

High-current conditions are tricky to navigate in near zero visibility. In some cases, the river can form large cavern systems that undercut the formation by many feet. A few years ago, I was diving during flood conditions in a new location. I decided it was time to surface after about an hour of exploring the river bottom while only being able to see a few inches in front of me. As I ascended, my head suddenly bumped into a ceiling. I quickly realized that I was in an underwater cavern.

I turned myself around so that I was facing the cavern ceiling and wondered, “What do I do now?” I searched for an edge without any luck. Right when I thought things couldn’t get any worse, my dive light went out. Luckily, I always carry a backup light. After I got my bearings, I decided to watch the tiny particulates flow by my mask so that I could figure out which direction the current was flowing in. As I ascended, I slowing moved in the direction that I thought would bring me back to the center of the river. Fortunately, I was correct and was able to surface. I never dove at that site again.

When we dive in swamp rivers, we enter the homes of critters that are a little higher on the food chain than humans. A few years ago, I found myself in two very uncomfortable situations. While diving in a familiar location and crawling along the river bottom searching for what might be unveiled, something much larger with grey skin literally bumped into me and moved me a few feet. I knew without a doubt that it was a bull shark. These beasts are known to travel in the rivers that we explore, and this was a big one that was able to push around a 220-pound man plus 120 pounds of gear. I hunkered down for a few minutes, then continued to explore.

Later that same year, Aaron and I traveled to South Carolina to search for fossil specimens. While diving in fresh water tidal rivers with heavy currents, we knew that there was a much bigger risk involved – alligators. We made a deal to always surface in the middle of the river and never along the edges where the gators hang out.

I was having a good day. I had collected quite a few specimens in my bag and decided it was time to surface. As I surfaced, I didn’t realize that I was ascending in a bend of the river. The heavy current caused me to drift close to the bank and wouldn’t you know it, I surfaced to an unexpected staring contest with an alligator about six feet away. The gator’s head was as wide as my shoulders. I stretched my body on the water’s surface so that I would look as large as the gator, knowing that they size up their prey. It hissed and I yelled for Aaron, who was fortunately in the boat and came to the rescue.

These stories describe only a few of the many adventures we have embarked on while completing underwater research. Aaron and I intend to share our experiences in the field and bring our excitement of field research to thousands of students from abroad at the X-STEM Extreme STEM Symposium and the USA Science & Engineering Festival in Washington, D.C. on April 26 and 27.

Jason Osborne is an explorer, innovator and philanthropist. He is the cofounder of both Paleo Quest™, a non-profit citizen science organization, and SharkFinder™, a program that brings real, tangible science to classrooms and citizen scientists alike. He also promotes STEM education as a mentor, host researcher and research lead for JASON Learning, an educational affiliate of National Geographic and the Sea Research Foundation. During normal work hours, Jason develops cutting-edge biomedical lab instrumentation as a neurobiological instrument and systems designer for the Howard Hughes Medical Institute’s Janelia Research Campus.