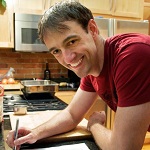 Some of the finest and most engaging scientists don't wear lab coats or work at universities. Instead some of them can be found in the top kitchens of America donned in aprons and chef's hats as they skillfully blend their passion for cooking with educating the public about the science of culinary arts.

In the middle of this exciting and growing milieu is Jeff Potter, cooking enthusiast and computer software engineer whose wildly popular 2010 book, Cooking For Geeks was deemed by the Washington Post as "one of the most useful books on understanding cooking." And his video demonstrating how to hack your slow cooker into a sous vide rig, is a must-see according to the hacker website, Make.

"I love science, and what better way to teach science than with food?" he says. But Jeff -- a self-proclaimed geek himself -- readily admits: "I'm not actually a chef. I don't run a restaurant and I haven't been to culinary school. I studied computer science and visual art at Brown University, and I still do software engineering, working with Internet startups helping them with infrastructure and operations."

So, what inspired his passion in the science of cooking and to write Cooking For Geeks? "When I got to college, I was surprised to learn a common thing: most of my classmates didn't know how to cook, and my cooking skills were also limited," Jeff says in an interview with Make. "Cooking for Geeks is the book I wish I'd had ten years ago, so that my trial-and-error stage in cooking would have been much, much shorter."

He adds: "Being a geek — somebody who's curious about how things work — I wanted more than just to write a cook book that included how to 'do this, do that' type of instructions. When it comes to cooking, having some basic food science actually ends up being incredibly important."

Jeff's journey into the realm of cooking and food science has been an eventful one. He has given talks at events all over the globe—from Germany to California to Australia. "I've experienced the unexpected joy (and terror) of making a 500-pound doughnut on a Food Network TV special." He's also had the privilege to be involved as a trustee and spokesperson for Awesome Food, a non-profit that gives out $1,000 micro-grants to ideas related to food. "It's been a humbling experience," he admits.

Jeff is thinking about writing another book about why we eat the way we do. ¨It's a tough question to answer,¨ he says. This is because, unlike cooking, where a science experiment can show results in hours, studies that look at food and its impact can take decades," Jeff explains.

"It's amazing how much we still don't know about food," he muses.