The Surprising Viruses in Our Gut

We were just getting used to the idea of our digestive tract as an ecosystem. There are 10 times as many bacteria in our gut as there are cells in our bodies, and the ecological balance between the different types might affect everything from our tendency to gain weight to our general health and susceptibility to various diseases.

Now, a Weizmann Institute researcher has exposed a whole new layer of this ecosystem: the viruses – called phages – that infect our gut bacteria.

Dr. Rotem Sorek and his team identified hundreds of these phages in the human gut. They were able to find them thanks to the fact that bacteria keep “files” within their genome of every virus that has ever tried to attack them (or their parent cells – these records are preserved in cell division). These files – bits of the viral genome clipped and stored inside special DNA “folders” – are a primitive, yet efficient adaptive immune system, and they proved to be a wealth of information on which viruses were infecting which bacteria. 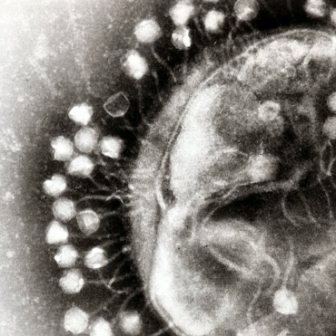 Their first surprise: Most people share about 80% of their gut phages. Considering the diversity of viruses in nature, the researchers had expected to find more variety, especially between different groups. (They compared gut bacterial DNA from Europeans, Americans and Asians.) That really gives new meaning to the idea that we all look the same on the inside.

The next surprise: Not all the phages seemed to cause harm. Some bacteria carried an entire viral genome within their own DNA, rather than a short snippet, and the researchers surmised that there was some benefit to the bacterium in this. For instance, they found that some phages could confer antibiotic resistance, receiving space in the host’s genome in return. In other words, just as our relationship with our gut bacteria has evolved into a tradeoff between nutrition and the services they provide, so too, the bacteria have evolved another tradeoff with certain viruses.

All of this, of course, has tremendous implications for human health and biomedical research. Sorek’s vision for the future, for instance, involves creating vaccines against specific phages. This could give a boost to selected beneficial gut bacteria – for instance the ones that help prevent allergic reactions. And that will give new meaning to the idea of restoring our internal balance.

I'm impressed, I need to say. Actually not often do I encounter a weblog that's both educative and entertaining, and let me tell you, you might have hit the nail on the head. Your thought is outstanding; the problem is one thing that not sufficient persons are speaking intelligently about. I am very pleased that I stumbled throughout this in my search for one thing relating to this.

I sometimes wonder of the intricate and delicate balance that is the human body. To the extent that these balances come through millions of years of evolution, I am fearful of fiddling with these items to the extent that we do not understand the vast subtlties

This is an amazing discovery. And its a relief to find out that not all phages causes harm. I like how you said we all look a like from the inside. When was this discovered?

It was published in the July issue of Genome Research

This is a great stuff, all are harmful if get unnoticed. Your thought is outstanding.