Of the four new articles online on our website, three happen, purely by accident, to be on physics research. The three are very different, and yet each is an illustration of the ways that basic physics research changes our world – in small and large, practical and enlightening ways. And each is situated at a different intersection between the technological and the theoretical – a technological breakthrough that resulted from a successful attempt to provide proof for a theoretical construct, new inventions based on elementary physical principles of light, and a theory substantiated through a large array of advanced particle detectors.

Take the work of Dr. Shahal Ilani. Ilani and his research team created something that had been predicted back in 1934 by Eugene Wigner: an electron crystal. In an electron, or Wigner crystal, individual electrons are held in a fixed configuration by mutual repulsion. Clearly, there are no practical uses, yet, for electron crystals (Ilani’s first, proof-of-concept, crystal consisted of two electrons). One creates them for their own sake – to prove the prediction, and thus a fundamental precept of quantum physics.

The challenge was to produce a system so inert that the electrons would only interact with one another; not with any other part of the system. And that has led to a very practical invention. Ilani and his team managed to create their original tiny electron crystals in ultrapure carbon nanotubes. But scaling up the nanotubes to make larger electron crystals was problematic: Adding length increased the probability that electron-attracting defects would be introduced. So Ilani and his team developed a whole new method for producing flawless carbon nanotubes; these are likely to have a number of immediate applications.

Dr. Dan Oron’s research, in contrast, is eminently practical:  He, too, builds nanocrystals, but these are tiny rod-shaped crystals about 50 nanometers long that can absorb two low-energy photons and emit a high-energy one in their place. This neat trick may enable the design of solar collectors that could make use of a much broader range of the light spectrum.

Oron’s research has also led him into biological imaging: A microscopy method he developed uses femtosecond (a millionth of a billionth of a second) laser pulses that start out long and shorten as they penetrate living tissue. He and his colleagues then used these pulses to image excited neurons within mouse brains.

But if you look closely at Oron’s work, the advanced technology also illuminates some basic light physics. For example, the nanorods make use of the dual nature of light. They absorb light as individual photons, but are tuned to the wavelength of the light: The radius of each rod is set to a particular wavelength (color). The microscopy, as well, depends, among other things, on a precise understanding of the way that light scatters from a surface.

The third article concerns a phenomenon that has no foreseeable practical application: high-energy neutrinos that come from the far reaches of space, passing straight through the earth on their way. Prof. Eli Waxman is a theoretical physicist who, together with the late Prof. John Bahcall, had developed a theory proposing that such cosmic neutrinos originate near certain young black holes, as well as suggesting an upper limit to the number of particles that could be detected. That number is very small because, even though billions of them are passing through at any one instant, only rarely do they interact with matter. Though it did not take 80 years (as it did with the Wigner crystal) for technology to catch up to the theory, several decades did intervene between the original idea and the detection of neutrinos that appear to support Waxman and Bahcall’s model.

That technology is quite impressive – not least in size and scope. This is the IceCube experiment, based on some 5,000 detectors buried in a several-kilometer cubic array under the Antarctic ice. It takes an array that large (and isolated from other sources of radiation) to detect a mere handful of neutrinos.

Because these neutrinos have traveled straight from their source to the earth, they carry information about how they were produced – a sort of telescope that can peek into the insides of stars. They can thus give us clues as to the very workings of the universe – in other words, basic physics at its finest. 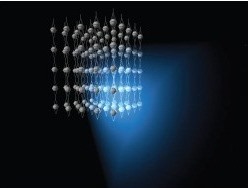 SI was curious if strong gravity and or acceleration can bend light...can photons therefore effect gravity? Is this in general relativity? I only studied special relativity.טודה. שלום

Dr. Dan Oron replies:
Gravity affects the trajectory of photons although they are massless. One way to think about this is to redefine mass using energy and momentum, which leads to the definition of a ‘rest mass’ (the mass an object would have if it had no momentum). In fact, “gravitational lensing”, the bending of light by very massive objects, is a tool for identifying massive dark objects in astrophysics.

Indeed if that is the.case then could very intense photon beams such as a laser reduce or even cancel gravitational forces ? Maybe this is what dark energy and or matter are....no one knows for sure and it seems like current physics is at a loss to explain . We need another Richard Feynman.... :-)