A systematic approach to melanoma mutations

Metastatic melanoma tumors. Left exhibits low or absent expression of RASA2 and reduced survival, typical of about 35% of patients. The sample on the right exhibits high RASA2 expression and increased survival

Rates of melanoma are increasing, even as the rates of other common cancers are decreasing. According to the Melanoma Research Alliance, it is the most common cancer diagnosis in young adults 25-29 years old in the United States, the second most common cancer in young people 15-29, and its incidence has tripled in the last 30 years.

What are we doing about it? The Weizmann Institute’s Prof. Yardena Samuels has a database of over 500 samples from melanoma patients, and she is using this information to figure out how mutations drive the cancer. This is easier said than done. The damage to our DNA from the sun’s radiation can be widespread – a single melanoma cell can have hundreds of mutations.

Samuels and her group are going about the process systematically: They looked within a particular subset of melanomas – a group that often has a poor prognosis – for a particular type of gene. The genes known as tumor-suppressors are often mutated or inactivated in cancer. When they work, they protect us from cancer by keeping the brakes on cell growth or telling a cell with cancerous mutations to commit suicide. When they don’t, they not only fail to prevent cancer from growing and spreading, they can be rooked into aiding the process.

The melanoma tumor-suppressor Samuels and her group found interacts with an oncogene that is common to the set of melanomas they were looking at – apparently regulating its activities.

How does one restore the function of a gene that is lost or mutated? That is the question that the group is now addressing. “Now that we have identified the tumor suppressor, we can work out its pathway in the cell and understand how it is meant to function. And that, we hope, may lead to some ideas for treating this subset of melanomas – up to 35 percent of the cases. Among other things, this work highlights the need for more personalized diagnoses and treatment protocols for cancers like melanoma,” says Samuels. 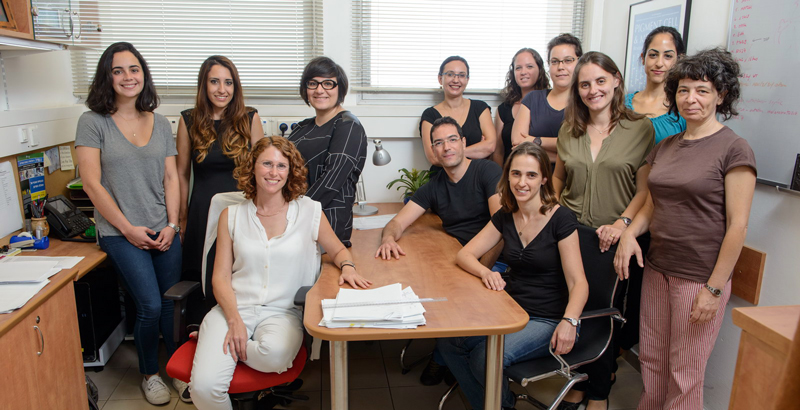 Prof. Yardena Samuels (front left, in white) and her group. Drs. Rand Arafeh and Nouar Qutob (standing to the right and left of Samuels, respectively) led the study

A link between the immune system and obesity: when certain rare immune cells are missing, mice gain weight, even on a regular diet.

A brake on plants' starch production machinery that turns it off at night -- but stays lightly depressed during the day too.