Spent Wednesday through Friday in Estonia at the kind invitation of Marge Konsa and the Institute of History and Archaeology in Tartu. Gave a lecture on computer-aided statistics for burial studies (here's my presentation), then went to Tallinn, where Jüri Peets and Raili Allmäe showed me the finds and horrifically battle-damaged bones from the two 8th century Swedish mass burials in ships at Salme on Saaremaa. Also had time to meet with my grad school buddy Marika Mägi and do a lot of sight-seeing. Pics on Flickr!

The vibe in Estonia is optimistic and self-confident. Plaques about EU funding are everywhere. Much fewer run-down buildings than last time I was there, in January of 2002. But there is still a lot of squalor. The post-Soviet world has a particular kind of patchy microsqualor. I found a juicy bit just a stone's throw from the seat of government and the country's most expensive apartments. This comes not of poverty, but of uncertainty about ownership after property was nationalised and then de-nationalised. Decades after the fall of the Iron Curtain, people still don't quite know who owns certain property, and before they do, nobody will renovate it. 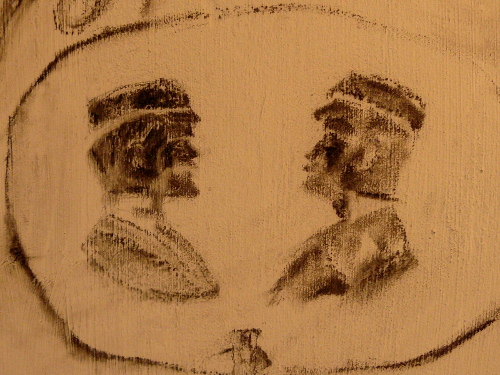 Tartu is very much like Uppsala and Lund, down to the details of academic culture. Though mensur ritual fencing was never as big at the Swedish universities as in Tartu. I was interested to learn that among the student fraternities / nations there before WW2, there was a Jewish one with a proud Star of David on their velvet cap where other fraternities had similar symbols. Today only the more conservative and nationalistic students join fraternities, and they tend to be organised by academic subject rather that the origins of the members.

I visited the students' jail in the attic of Tartu university, full of graffiti in German and Latin from c. 1900. There were five of these detention rooms, but four perished in a fire in the 1960s. Apparently the walls were frequently whitewashed, so with the right methods you could probably image many older layers of graffiti there.

On my way home I flew in an Air Baltic Bombardier DASH 8 from Tallinn to Riga. It's a Canadian 1984 model. 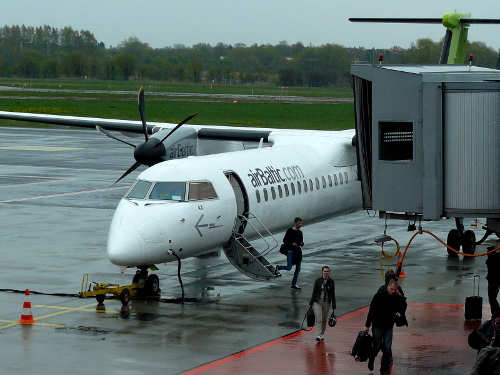 I wonder what one does with 800 old double decker buses when one loses one's public bus licence. It is clear what happens to one's mansion when one dies - it sits there and rots, despite being worth a fortune, judged to be worthy of preservation and located in one of the most wealthy places on earth.

John, sadly North Sweden is full of once-great dilapidated houses. The exodus to the south means there are no buyers, at least not with the money to restore the houses.
--- --- --- --- --- ---
I have always felt the Baltic states got short-changed by history. The Teutonic Knights, the Russians The Nazis and the Soviet union. And a few years ago Putin took the screws to Estonia, launching a desinformation campaign to the effect that Orthodox churches were being destroyed and Russian-language people being treated the way Russians treat Jews.
-Russia-language Estonians still have to do a language test to get full citizenship, but I see this as post-colonial stuff raher than born out of malice. Zod knows Estonia has reasons to br wary of their neighbour.

DASH 8 is slightly smaller than SAAB 2000. The high fuel costs should be favourable to turboprops but SAAB gave up building passenger aircraft before the price hike.
Note the propeller tips are slighly swept back, to delay shock waves building up.
-I hope the student fraternities don't still practice the suff that leaves mensur scars.

@John. Whatever you do with 800 old buses, you don't mention them to my dad or brother, who have already got several of the damned things and recently did a mercy dash in a private jet to Cyprus to save another one for a millionaire enthusiast friend.

@Jane - It was interesting. In Hong Kong's hot, very humid tropical summer and dense urban environment (not a comfortable combination because the urban areas become heat islands), the old penny pincher took a gamble that Hong Kong people would not be willing to pay extra bus fare for the buses to be (1) clean, (2) lower exhaust emissions, (3) air-conditioned. He lost.

It took me a while to get used to the unaccustomed luxury of riding in clean, air-conditioned buses in summer that are not belching filthy black diesel fumes. But I coped. Clearly, so did everyone else. So, a company that had existed for as long as anyone could remember disappeared, shortly followed by its owner. No one misses it.

There must still be a few old bone-shakers sitting around here waiting to be rescued. You can decide whether or not to alert your Dad and brother.

Another dilapidated mansion in Hong Kong. I always wanted to go and snoop around this one myself, particularly when it had no form of security other than the ghost stories to deter random visitors, but never got around to it.

The 'urban explorers' seem like a pretty harmless bunch - they are not the 'taggers' who despoil with graffiti and 'art', they just like to visit, observe and document with some really rather good photographs. They have a genuine interest in preservation and documentation, not vandalism, as far as I can see.

I like the way the Bombadier DASH8 has an arrow pointing in the direction it is supposed to go. "This is the front end."

I love the graffiti, especially the first!

I'm fascinated by this latest conflict between an economic and a proto-nationalist empire. The last one didn't work out too well. Whoever is putting up those EU plaques knows what he is about.

I just flew in one of those! I thought it was great.

The Dash-8 used to be a workhorse for thinly traveled short-haul routes in the US, but most airlines who were flying the type have pushed it out in favor of regional jets. I haven't been on a classic Dash-8 since 2006, but have had more recent rides on the Q200 and Q400 derivatives operated by Horizon Air, which IINM is the last major US operator of the type.

Turboprops are, on balance, more efficient on sectors up to about 400 km (beyond that, the faster cruise speed of a regional jet makes up for the fuel consumption rate). It is not so common in the US to fly sectors that short anymore--between security theater and getting to and from the airport, the travel time isn't that much shorter than driving (which takes four hours or less if there is a motorway available, as is usually true in the US, and almost everyone who might travel that distance in the US either owns or can rent a car).

(OT) Alcohol and drugs: Not just for modern man: 'Anthropology of intoxication' in prehistoric European societies

The Song was characterised by very a high-minded level of aesthetics; also in the style in which Chinese was written. I have a friend who obsessed about writing calligraphy in this style - he put it down to the example set by the Emperor, who was reportedly a high-minded type, but it seems a bit much to credit any one person - it was a highly productive period, marked by a lot of advances and population increase, and it appears to have been very outward-looking.

Solutrean Hypothesis not only dead, but now cremated.

"One of the ironies of traits which we use to differentiate populations, such as skin color and facial features, is that these might actually have relatively shallow time depth within a given lineage." That certainly appears to be true of the very pale skin of modern Europeans - it is recent.

(OT) The clever Chinese: A collaboration between ILPB, Shenzhen University in China and Korea University in Korea.
“Going beyond the surface: New tech could take light-based cancer treatment deep inside the body” http://phys.org/news/2014-05-surface-tech-light-based-cancer-treatment…
IR to visible light.-Second harmonic generation? Four-wave mixing?
"There are no long-term side effects for PDT, it's less invasive than surgery, and we can very precisely target cancer cells"

John, a good piece of DNA work. But what is captain Picard doing there?

( OT) Bill Bayley 'Britain is medieval compared to Sweden' [ regard to equality} http://www.thelocal.se/20140514/britain-is-medieval-compared-to-sweden-…

Birger - apparently some people think Captain Picard looks the way Kennewick Man would look if he were still alive. It's a Razib joke.

It troubles some people that he now blogs at an overtly political site (or overtly conservative site, although not all of the bloggers are notably right wing or conservative), but Razib himself very commendably leaves politics out of it when he talks about science; he always has, which is one of the reasons I am still reading his science writing after 11 years.

Same story - lost girl found after 13,000 years. Fantasising, I hypothesise that she gave her young life in order to kill the Solutrean Hypothesis that dishonoured her ancestors. No, the poor thing just fell down a hole and died. How strange to feel empathy over a time gap that long.

If people don't like going to the Unz site, Dienekes Pontikos has also blogged it:

"it seems that everything points towards continuity of Native Americans since the earliest settlement" - I think that makes it clear enough - no Solutreans required.

I agree with Bailey - I am an unashamed feminist activist, I can't remember a time in my life when I was not, and I thought the Swedish production of "The Girl with the Dragon Tattoo" trilogy was great - the DVDs are still on my film collection rack, waiting for my daughter to get around to watching them. The American remake is also there, with a note from me attached that says "Don't bother."

If you think this is bad, when my daughter and I get sick, we have to drink cicada soup. I would like to be able to say that it is really not that bad, but it's not true - it's utterly disgusting.

Wuhan is famous for producing geologists.

If I was a hedgehog, I would be ecstatic about locusts. Introducing locusts to those not used to it since childhood....not a likely success. I suspect bugs became a staple during periods of famine and the tradition just lived on..