Weekend Diversion: A contest, an upgrade and a chance to see me LIVE!

"Art has never been a popularity contest." -James Levine

Sometimes, you might feel like you've heard it all, seen it all, and that nothing's original anymore. But I beg to differ. Just because great things have come before doesn't mean that there aren't great things happening right now. While it might "only" be a cover of a Kanye West song (which itself heavily samples a Ray Charles song, at one time featured here), I encourage you to listen to the Automatic's brilliant version of

And while the stories of the Universe I tell you about here don't tend to be my personal, original research, I do like to think I bring something unique and positive to the table. Well, if you think so, too (and I know some of you do), or if you know of any science writers deserving to be honored, now's your big chance. 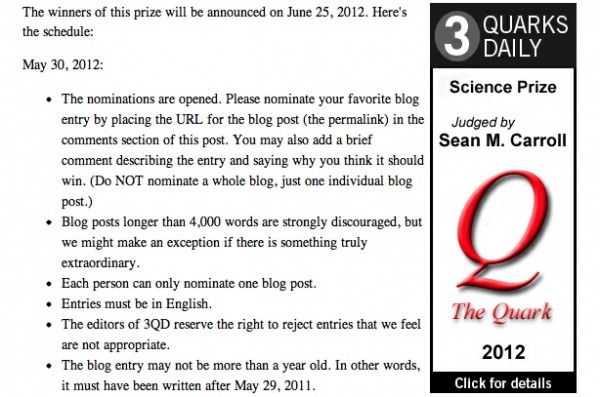 Because it's time for the 2012 3QuarksDaily science writing contest! 3QuarksDaily is one of the best science sites on the web (outside of scienceblogs, of course), and this is their fourth annual contest, judged by another cosmologist, Sean Carroll, who has the (dubious?) distinction of finishing tied with me in last year's 3QD contest, which was judged by Lisa Randall! 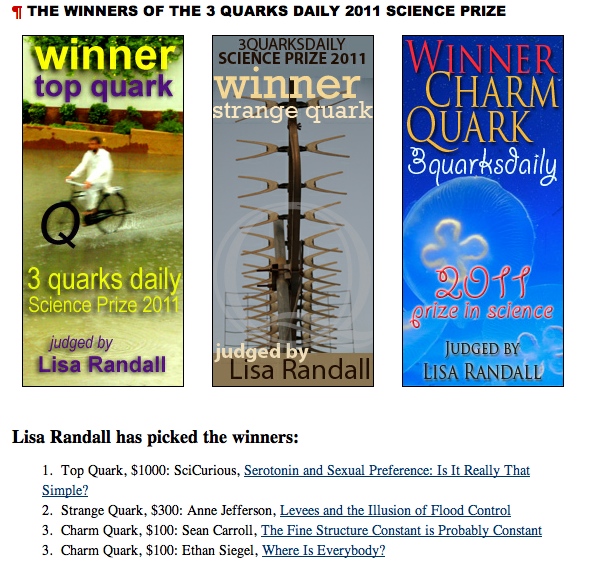 Last year, this article was good enough for third place, while this year, I already have a couple of nominations in the comments of the contest. One of the comments about my writing is so good I have to reproduce it here (bold emphasis mine):

This is but one of Ethan Siegel's fantastic posts, as always, it's fun and informative, and he has a unique ability to instill a great appreciation for science and dumbstruck wonder at the universe in the reader.

What's more, Siegel is completely bonkers mad, his massive and energetic passion always shines through in his writing. Fantastic!

Nominations are open until midnight (EDT) tonight, but I encourage all of you to go through the links there for some very fine reads on a wide variety of scientific topics. As Sean and I are both cosmologists with very different voices, I don't expect to do very well in this year's contest, but that doesn't mean you shouldn't head on over there, nominate any piece of good science writing by anyone you respect, and enjoy the best of the last year's worth of science writing!

Next, of course, is the update you were promised. 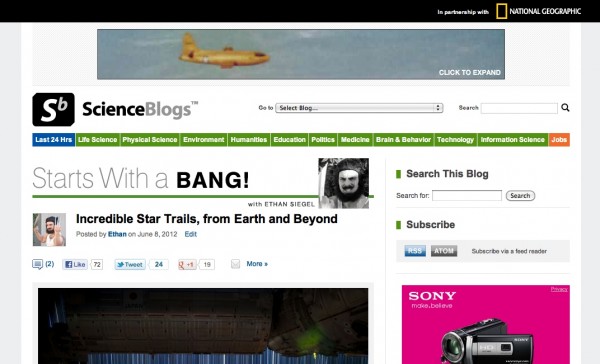 As practically all of you have noticed, there have been some changes around here since the migration. Well, the ScienceBlogs/National Geographic team has been working extremely hard to fix all the bugs associated with the new setup, and think they've worked them out, including commenting, individual blog searches, updated RSS/Atom feeds, and more. (If you haven't updated your feeds, make sure you do!)

Things look like they're all in working order from my end, but all features may not be 100% functioning properly from yours. Well, if they're not, I want to hear about it, now! If there are any technical difficulties that you're experiencing with the new site in any way, even if it's on a different blog, leave me a comment here, and I'll try to pass the message up to get your issue resolved. We're all in this together.

And finally, there's a special treat in the works for those of you who are local, in or near Portland, OR. 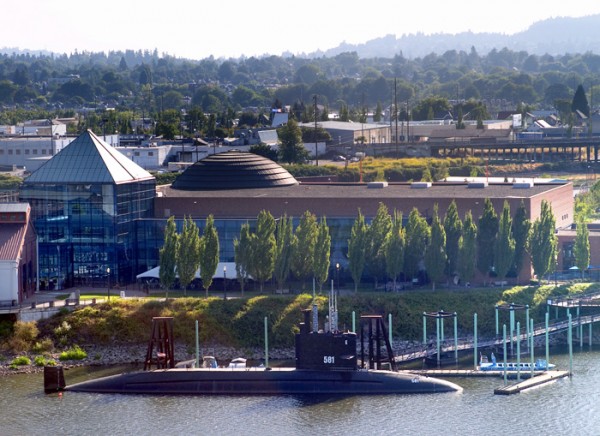 Because on the evening of Monday, June 18th, I'll be at the Oregon Museum of Science and Industry, delivering a free public talk for the Rose City Astronomers, starting at 7:30 PM. Come on in -- to the Planetarium, no less -- and enjoy a science talk, followed by a trip (optional) to a local pub to continue the conversation.

What will I be talking about? 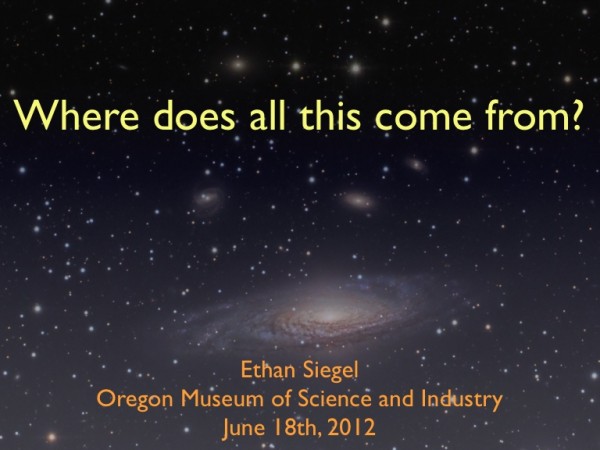 Where does all this come from?

All of this -- everything that we know of in existence -- had to come from somewhere. In this journey, we'll start with the world that we know and journey out into the Universe, exploring where the elements that form everything on our planet originate from, how they were created in previous generations of stars, where the building blocks of those stars came from and how they formed into galaxies, where those very first atoms came from in the earliest stages of the Big Bang, and finally, why we have a Universe with something in it instead of nothing at all. 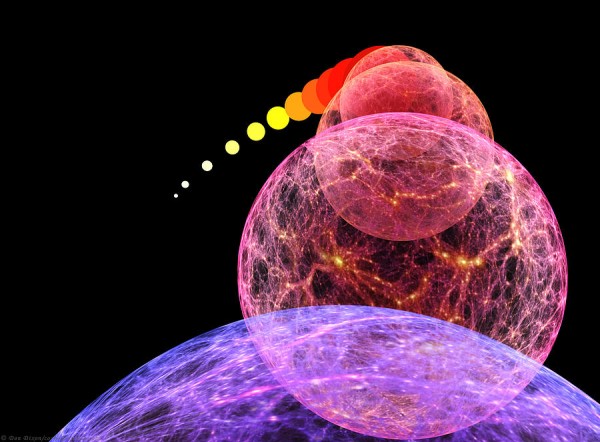 Read the full talk description (and a brief bio) here, and then do the following three things:

Hope to see you soon, and have a great weekend!

Ad (1): almost any one of your blogs at startswithabang would beat most of the blogs nominated at 3Quarks. Amazing, but true. You combine science, humor, and knowledge in a unique way and deserve the 1st place IMHO.
Ad (2): a - when I write a comment and click with a mouse somewhere else in the text, the vertical cursor line does *not* show where my new text entry point is. If possible, please have it corrected. I'm using IE9 and Win8.
b - sometimes I get the impression you have published a blog hours or even days before I get to see it, even though I refresh your site very often (it's one of my start pages in the IE). Is there really some delay and if so, can it be reduced? For example, I'd love to nominate some of your blogs on the 3Quarks, but the irreversible arow of time has already crossed the deadline of blog entry submissions... Why am I seeing this so late?
c - you used to have a comment preview, and some readers have asked to have the feature back. I'd like to have it back too...
Ad (3): Portland is simply too far away for me to visit, even though I'd love to. Would you consider visiting Europe some time?

Thank you for the kind remarks and for the feedback as to how the upgrade has affected you.

I will relay all three of these points to the national geographic technical team, and hopefully we can address them shortly.

As for visiting Europe, I have been there a number of times, although my most recent trip there was 2006. I am sure that I will return again someday, and all of Starts With A Bang will certainly know when I do!

Never mind Europe, they've all gone broke. What you really need to do is visit Australia and give a few talks here.

Careful now - we might have to take back some of the old colonies to get over the tough times - or given how many Irish are in Oz, just stage a coup

Voting for the 3QD thingo is open now.