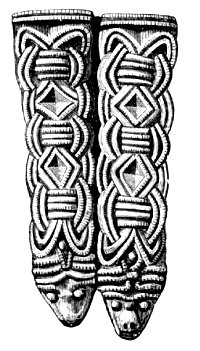 Metal detectorist Steffen Hansen has kindly given me permission to show you his tattoo sleeve. He found the strap-end at Øvre Eiker in Buskerud fylke, Norway, and had it tattooed along with other Norwegian examples of the Borre style. I haven't got a picture of his find, but you can see what they look like in the accompanying picture of a piece from the eponymous find at Borre in nearby Vestfold fylke. The tattoo was done by Mikael "Kula" Jensen of Radich Tattoo in Mjøndalen.

The Borre style is the Viking Period's second and most long-lived style of relief decoration, c. AD 875-975. Its frontal animal heads, often with Mickey Mouse ears, marks it as animal art and as a descendant of the Gripping Beast style, but the interlace that covers the objects' surfaces isn't animals. Instead it's abstract ring braids with characteristic saw-toothed ridges, mimicking metal filigree or cord passementerie. Charlotte Hedenstierna-Jonson has pointed out in a 2006 paper that the Borre style never occurs on offensive weaponry, but is common on jewellery, belt fittings and mounts for defensive weaponry. Thus she interprets the Borre style as a form of magical protection for the wearer.

Borre itself is a royal site with many major barrows. In all likelihood, the ship burial from c. AD 900 that gave the style its name contained a king of the Vestfold lineage. I was there in 2013, gave a talk and took a lot of pictures.

The previous instalment in our series of metal detectorist tattoos was from Hugo Falck. Us archaeologists love to see people engage with the archaeological heritage, and you don't really get more personal about it than this. Dear Reader, have you got a tattoo of an artefact that you’ve found? I’d love to show it here!

Don't be surprised if one of the talented designers of handknit socks is inspired to create a pattern based on this art. You can see many examples on Ravelry.com.