“The Milky Way is nothing else but a mass of innumerable stars planted together in clusters.” -Galileo Galilei

Welcome back to another Messier Monday here on Starts With a Bang! With 110 deep-sky objects making it up, the Messier Catalogue is the first comprehensive, accurate catalogue of faint (but not too faint) fixtures in the night sky. Each object tells its own unique tale, and is visible to amateur and professional skywatchers alike with even the simplest of equipment. Many of these objects were discovered by Charles Messier himself (or his assistant, Pierre Méchain), while others go all the way back to antiquity! 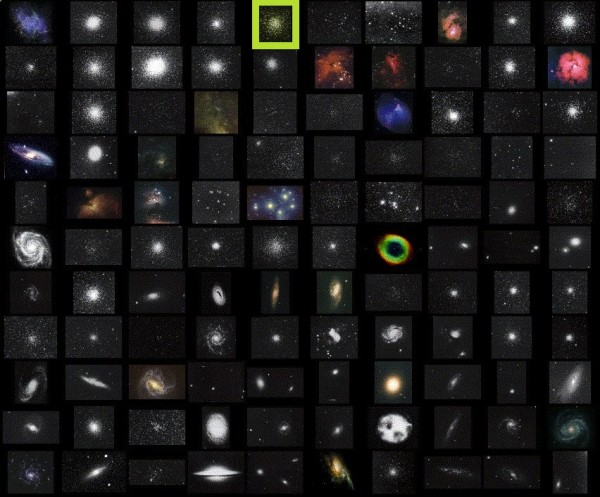 Image credit: SEDS compilation of all 110 Messier objects, via http://messier.seds.org/.

Today, we're taking a look at just the fifth object in his catalogue, the globular cluster Messier 5. Discovered in 1702 by Gottfried Kirch and Maria Margarethe, it's a collection of some 100,000 stars contained within a radius of around 100 light years, like all globular clusters. However, Messier 5 is unlike the majority of globulars for a number of reasons, which you can marvel at every time you take a look at it. Here's how to easily find this wonder of the night sky. 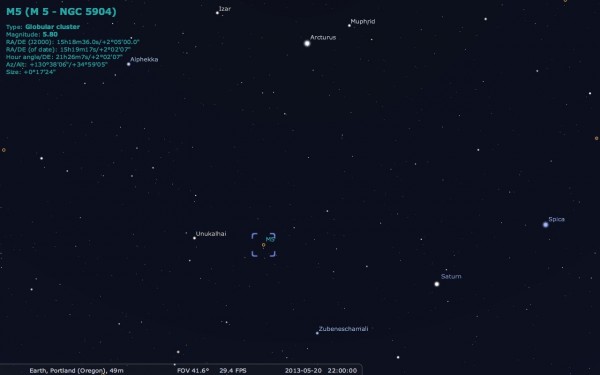 The brightest star in the northern hemisphere, Arcturus, is one of the easiest to find: just follow the "arc" of the Big Dipper's handle and you can't miss this orange giant! You can "speed on" to Spica, a bright blue star, and find yellowish Saturn just a few degrees away for the rest of the year. But if you look to the left of Arcturus and Spica, you'll find a fainter but still bright star called Unukalhai (or α Serpentis), the brightest star in the constellation of Serpens.

If you look back towards Spica a few degrees, you'll see the faint, naked-eye star 5 Serpentis, and if you train your binoculars or telescope on that star, you can't miss Messier 5, less than half-a-degree away. 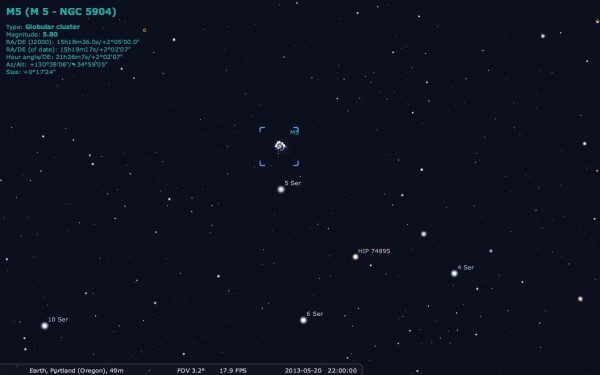 Being a globular cluster, M5 looks like a dense, fuzzy ball that's brighter towards the center and gradually fainter the farther you move away from the core. Like most globulars, it's very old -- more than 10 billion years for certain and possibly up to 13 billion, as dated from its Hertzsprung-Russell diagram -- and metal-poor, with its stars containing less than 10% of the elements heavier than hydrogen and helium that the Sun has. 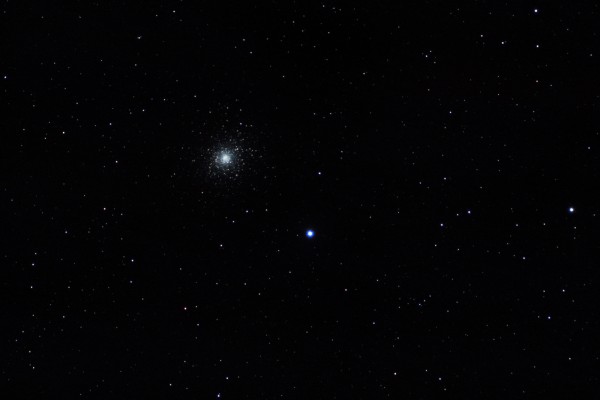 But unlike most globulars, there are virtually no bright stars in M5; the brightest star in there is only of magnitude 12.2, meaning that (realistically) you need at least a 6" (15 cm) telescope to actually tell that this fuzzball is made of stars! Messier himself wrote that it's a round nebula that doesn't contain any stars, which is exactly what I see with my own equipment.

But even many casual amateurs have far better equipment than Messier did in the latter-half of the 18th Century. 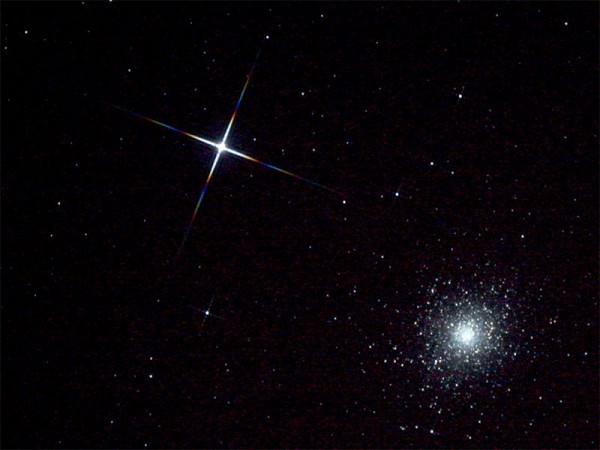 Image credit: CN member 2020BC, via Charlie Hein of http://www.cloudynights.com/.

There are a number of features that make this globular cluster really stand out: 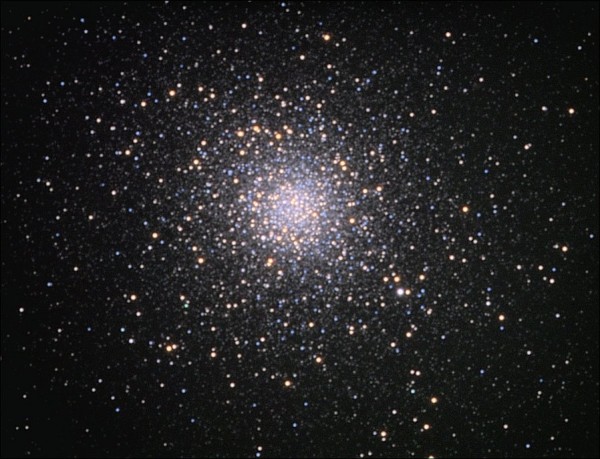 Because this globular cluster is -- like most globulars -- so old, the very bright blue stars you can see are blue stragglers, or stars that were created relatively recently from the merger of smaller stars, and the bright yellow/orange stars are Sun-like stars that have evolved into giant stars, something that will be our star's fate when it's as old as Messier 5 is now!

But what you might not realize is that this globular cluster is full of a special class of low-mass variable stars known as RR Lyrae stars. What you see actually depends slightly on when you look!

With at least 105 known variable stars in it, Messier 5 is one of the most prolific globular clusters in this sense! It's also one of the larger ones, with some estimates of the total number of stars in M5 reaching 500,000! (This makes sense, since one out of every few thousand stars is known to be a variable-type star.) It's located a distance of 25,000 light-years away, moving away from us at about 52 km/sec. 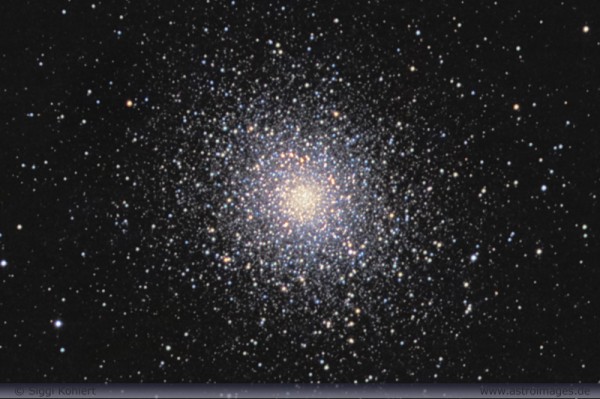 The closer you can look into the core, the higher the concentration of blue stars becomes. This is a relatively common feature in globular clusters, as mergers and mass-transfer becomes more common in the densest regions of a cluster. This beautiful image by Adam Block really showcases just what's going on in terms of star color and how it changes with radius. 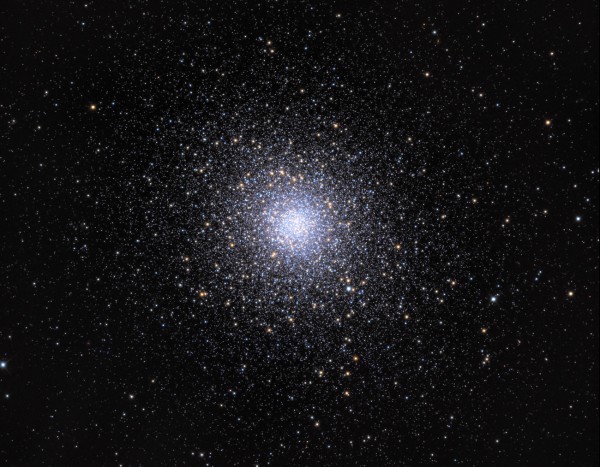 As always, however, the best image of the core of this globular cluster comes from the Hubble Space Telescope, whose resolving power is really unparalleled when it comes to separating out individual stars in dense, distant regions. The central core here is only 6 light-years in diameter, or just 50 arc-seconds across as seen from our point-of-view. 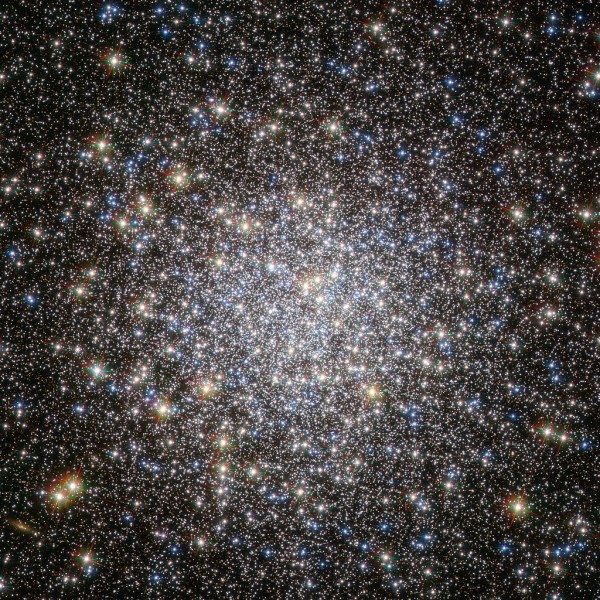 Because I'm a sucker for it, let's take a full-resolution trip through the inner core of Messier 5, just to show you how spectacularly (and how quickly) the star density rises-and-falls as you pass through the very central region!

Remember, there are 29 globular clusters in Messier's catalogue and some 200 total in the halo of our galaxy, but each one is a unique collection of ancient stars with its own history, and I'm pleased to get to share this one with you today, on Messier Monday!

Including today's entry, we've taken a look at the following Messier objects:

Come back next week, where we'll take a look at one of the rare "late additions" to Messier's catalogue and explore another one of these deep-sky wonders, only here on Messier Monday!

Nice. Downright beautiful in fact, and inspiring to contemplate.

What's the average estimated distance between stars at the center of that cluster?

How is it that a decent-sized region of space comes to produce a preponderance of stars that have a deficiency of elements above helium?

If there's not much above helium in those stars, I'm going to guess that the probability of planet formation around them is low as compared to other random samples of stars.

Is it also possible that an absence of planet formation could be caused by a higher star density, whereby misc. space dust isn't as likely to coalesce into solid objects, compared to conditions where star density is lower and there are fewer gravitational objects competing to capture the dust around them? (Something tells me I've just done another foot-in-mouth maneuver, but at least I'll learn something;-)

What would one expect the ambient conditions to be, toward the middle of that cluster? Hot and with lots of gamma radiation as compared to areas of lower star density?

Lastly, what's likely to be at the center of that cluster? I'm inclined to think that there's a net gravitational pull of stars toward the center of the cluster, such that at some point one might expect them to add up to a black hole. If so, is that something we could observe in the same way we observe the effects of other black holes on nearby objects, or would it be completely obscured by the stars around it?

We should go there, if for no other reason than to abide amidst such beauty. Would that our culture held such values more commonly. Though, 25,000 LY is a bit of a reach, even at a respectable double-digit percentage of c. Sustainability today, and to the stars tomorrow, or at least more and better space telescopes!

Nice cluster. Thanks for the Messier Mondays. They may draw fewer comments than more controversial posts, but I really enjoy contemplating these objects and learning a bit about the science. I'm wondering what the orbits of these stars look like -- if near the center of the cluster the orbits are complex and chaotic, or more nearly elliptical with occasional near encounters with other stars.