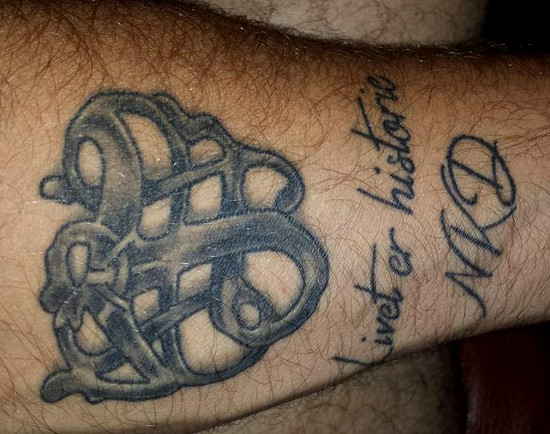 In our series of metal detectorist tattoos, where people put pictures of their best finds on themselves -- usually on their detector arms -- we now pay a visit to René Lund Klee. His tattoo depicts an Urnes brooch that he found on the Danish island of Lolland. The needlework was done there by Sandra's Ink in Nakskov. 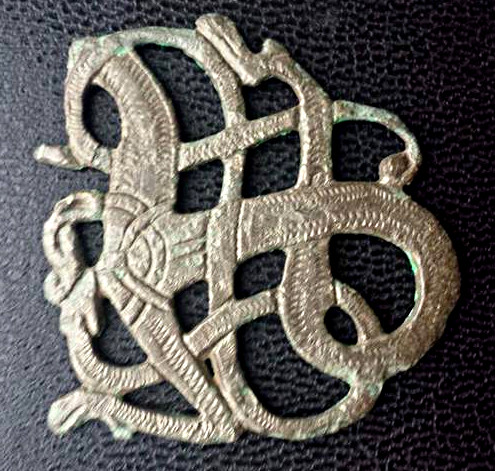 The Urnes style of c. AD 1050-1125 forms the end of the Scandinavian animal art tradition, which produced astonishing artistic riches during the Late Iron Age (c. 375-1125). Named for a Norwegian wooden church from the 1070s, the Urnes style is certainly no degenerate afterthought, but is instead like the final, spare and lucid collection of verse from an old poet who never lost the touch. René's brooch, which dates from about AD 1100, show's the art tradition's centuried main motif: the great beast. Sadly it is missing its head.

The Urnes style is also known as the Runestone style because it coincides with the great final bloom of the runestone tradition in Uppland and on Gotland. It has emphatic Christian connotations and usually occurs along with crosses and runic prayers. Yet everyone must have understood that this was the same distinctively Scandinavian art tradition that had been part of paganism until just a few generations previously. After Urnes comes a local version of a pan-European style: Romanesque art with its beautiful architecture, its murals, its woodwork, and, in Scandinavia, a school of charmingly inept figural sculpture.

The words next to the image on René's arm read "Life Is History". I think it's a good example of how keen and interested many detectorists are about the past. Thank you René! And any detectorist who would like me to feature a tattoo of a find -- please get in touch!

When I toured Sweden with the Seattle Scandia Folklore Society, we played concerts and dances in a high security prison and several folk festivals. Since I played English concertina, hardly a traditional Scandinavian instrument, I took the liberty of faking a Viking artifact showing a dragon playing an accordion in the engrossing twists and embellishments of good old Viking art. I'd love to share it with you. Maybe this summer when I visit Sweden I'll lose a button I made out of it in a given field for you or a metal detectorist friend to discover!