Seeing a laser from the moon

There was an xkcd feature a while back which asked the question "If everyone in the world shined a laser pointer at the moon at the same time, would we be able to see it?"

The answer was no. A laser pointer doesn't put out much light, and even seven billion of them doesn't represent a whole lot when spread over vast areas of the lunar surface a quarter million miles away. Even if you ramp up the light source to those helicopter-grade searchlights, no dice.

On the other hand, it's asking a lot for a beam of light to make it to the moon, bounce off in all directions including mostly into empty space, and to make it back into your pupil back on earth. It should be substantially easier to simply be an astronaut on the moon and see a laser shined from earth. So let's re-do the xkcd question: "If you shined a laser pointer at the moon, could an astronaut on the lunar surface see it?" 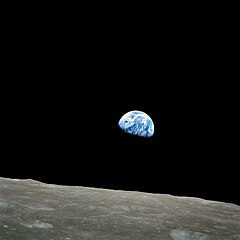 Seeing a laser from here?

The sensitivity of the human eye is somewhat complicated and depends on experimental conditions, but various sources indicate that under ideal conditions the human eye can detect light of as few as about 1000 photons per second. An astronaut on the moon isn't exactly in ideal conditions, but let's say this hypothetical next Neil Armstrong has landed during a new moon and is looking at the night side of earth - during a total lunar eclipse, I guess - so there's not a lot of ambient light to confuse the issue. As physicists are wont to do, we'll pull an order of magnitude out of thin air and say that we need 10,000 photons per second to make it to the astronaut's eye for unambiguous detection.

Well, a photon of light has an energy of

where λ is the wavelength and c is the speed of light. For a green laser pointer, the wavelength is about 532 nanometers and the energy of each photon is thus about 3.7 x 10-19 joules. A laser pointer outputs about 1 milliwatt, so dividing that by the energy per photon we find that a laser pointer puts out a pretty staggering 2.7 x 1015 photons per second. Only ten thousand of them need to make it to our astronaut's eye. Maybe it's possible?

Well, let's see. Like all light, a laser beam spreads as it propagates. The spread isn't much compared to a flashlight, but it does spread. A slightly optimistic value for beam divergence are around 1 milliradian. Over the 400,000 or so km distance to the moon, the beam will expand to a pretty enormous 400 km. The quadrillions of photons we're sending to the moon every second are thus spread over around 5 x 1015 square centimeters. The final count is maybe 1 photon per square centimeter per second. The pupil of the eye is smaller than a square centimeter, so unfortunately we're gonna have to classify this one as not visible, at least under this set of assumptions.

But hold on, 1 photon per second is not all that far from the 10,000 per second we wanted, at least in terms of orders of magnitude. You can buy 1 W lasers online for a few hundred bucks, and one of those has a thousand times the output of our 1mW laser pointer.* One watt is a thousand milliwatts, so in principle we're just about at the visibility threshold. If you and a dozen of your friends bought such lasers and pointed them all at the same spot on the moon, it is quite plausible moonwalkers could see it, provided that that ambient light was minimal. Of course all the Apollo astronauts landed during lunar daylight for reasons of safety and practicality, so I suspect you'd need a few more orders of magnitude of laser power to make it visible in daylight.

Finally, it's nice to know that astronauts on the International Space Station have in fact observed laser light from the earth. The experiment was much easier than the situation we've described because the ISS only orbits a few hundred kilometers up. The moon is many times farther. Still, it's a nice proof of concept.

Yes is is, thanks! I've fixed the typo - I had it right when I ran the numbers, so those should still be good.

But I do know NASA left a bunch of reflectors up on the moon so they could do EME measurements.

As far as I know there is ONE laser retroreflector left on the moon by NASA. It reflects all light directly back to the source whatever the angle of incidence.

I am pretty sure there isn't a "bunch" of them as stated in the previous comment.

This does not contradict your estimates, but I wanted to add that there's also evidence that, in ideal conditions, "about 90 photons had to enter the eye for a 60% (detection) rate":
http://math.ucr.edu/home/baez/physics/Quantum/see_a_photon.html