Bombed Box on the Euphrates

the LA Times originally leaked the news of the briefing, claiming there was video evidence showing the interior and the top of a Yongbyon type reactor, and presence of "Korean looking" scientists...

There's a lot of rubbish being written about this.

The Yongbyon reactor is a Plutonium production reactor.
It runs at ~ 5 MW(e), but is not very efficient.
It is a Magnox type reactor - ripoff of the old Calder Hall UK reactor.

The Magnox design works with natural uranium - no enrichment is needed. The fuel is trivial to obtain.
The fuel rods are narrow ( 3 cm) and long and the reactor is open for rapid pull out and replacement of rods. The rods are magnesium clad Uranium.

The design is easy, but somewhat unstable, it is gas cooled - typically carbon dioxide, which is a lousy coolant - and graphite moderated.
The graphite must be ultra-pure, making or obtaining the graphite is the hard step, oh and it is flammable...

A 5 MW(e) reactor like Yongbyon can make a few grams of Pu-239 per day.
Enough for a bomb or two per year or three, depending on how good they are at it.
The Pu has to chemically extracted from the fuel rods, basically by dissolving a lot of Uranium in acid. This requires a sizable facility, which appears not to have been on site and has not been identified.

Also, a 5 MW(e) reactor needs a medium sized cooling tower, nothing ginormous, but it still has to be there.
A part of the original claim about the "box" was the presence of small pumping station on the river nearby. It'd be hard to move the reactor heated water back to the river, but there is no steam outlet.
It'd show, easily, on IR imaging if operational, the river would be warm downstream from the outlet.

It would be interesting to see the pictures, see if they show a built, ready to be fueled core under the box. 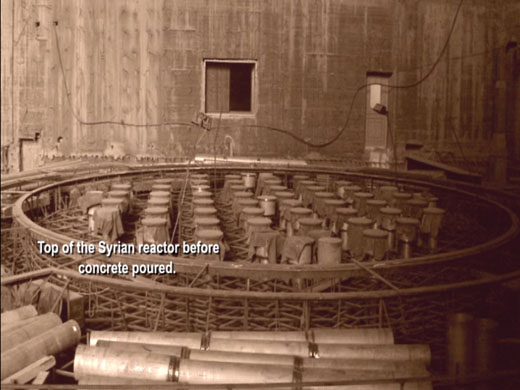 and here they are
If they are authenticated and all of the same site, then it does look like a small Magnox reactor was being built in the box.
Silly, silly, silly.
Really do wonder where they were going to put the cooling...

In other news: US military sealift command fires on Iranian boat
and the US rhetoric on Iran heats up

That still does not prove an operational reactor; the issue is not the fuel but the reprocessing - where were/would extracted used fuel rods be shipped to.
That should be amenable to classic remote intelligence analysis.
Also the absence of cooling is bothersome.

Either way - wtf were the Syrians thinking.
Buying a NK plutonium bomb factory is inviting really bad shit on themselves.

The speculation seems to be that the Israelis were convinced it was a Magnox reactor not yet fueled and they wanted to destroy it before it went hot.
That is understandable, given the assumptions that go into that decision making, and worrying, since Bushehr in Iran should go on this autumn (although apparently a truck convoy with insulation for Bushehr is being held up by Azerbaijan).

PPPS: Nuclear Mangos summarises nicely some of the points the intelligence briefing pushed

On a differnet note, we have a US aircraft carrier confluence coming up soon
The USS Truman is in the Persian Gulf, and the USS Lincoln is on its way to replace her, with maybe a few week overlap.
The Kitty Hawk is toodling around, she was undergoing maintenance before heading back to the USA for decommissioning... the Nimitz did a short tour covering for the Kitty Hawk, and is still toodling around the Pacific - apparently stopped at Guam, where I presume she did NOT resupply and re-ammo, because the Nimitz is headed home, right?

The USS Washington is the permanent replacement for the Kitty Hawk and is now
enroute, from the Atlantic. She is apparently going round the Cape, because she called in at South American ports enroute. That will be a trip, should get there sometime in May.

USS Roosevelt is exercising in the Pacific, due to deploy later this year, maybe replacing the Lincoln in the autumn? And the USS Reagan has completed qualifications and is back in port, and presumably the "surge" carrier should the balloon go up.

I don't see anything being in place in a couple of weeks, when the the next new moon is, and by June the Truman and Nimitz should be well out of there. June also seems a bad time to start anything.
So unlikely anything silly could happen by plan before sep/oct.
Geopolitically it is silly to do anything before the Olympics.
US politically, kicking over chairs to randomize elections would work best in october, and strategically, the Bushehr reactor startup, which was planned for Sep '08, is the next potential crisis.

PPS Arms Control Wonk has the text of the briefing
- sounds like the cooling was to be done by dumping the hot water back in the Euphrates, which is possible since it was a small reactor - which explains the absence of a cooling tower.

Unless the photos are outright fakes, this means the box was definitely a natural uranium graphite reactor intended for Pu-239 production at the rate of few kg per year.
That is not good at all.
Bollocks.

After the revelations about Syria's plausible secret nuclear project, destroyed by an Israeli air raid, speculation is turning back to Iran Arms Control Wonk and Whirled View have info, and interesting discussion in comments; and Nuclear Mangos has sprung back to life, which is a worrying sign to…

ships are sailing and oil is flowing and nukes are being fueled weird little snips of news piled over the last week: the US navy is still heavily out - the USS Truman has joined the Enterprise in the Gulf, where they should overlap for a few weeks if the Enterprise does a normal length tour. Though…

it has been yonks since I randomly rambled about middle eastern muddles, so why not now... apparently some interesting things have happened: al-Sadr's Mahdi army has ended its truce and is fighting the Iraqi government and US troops - this could get confusing if the Iranians are backing both…

USS Chung-Hoon is headed for the South China Sea, where there have been recent minor confrontation between US and Chinese vessels Chung-Hoon is a Burke class Aegis destroyer - good radar, but curious choice for sea defence, heavy on missiles and a bit slow and heavy to be playing bumping games.…

Are they bringing in Colin Powell to present the evidence on the Syrian thing?

IIRC the Kitty Hawk has been sold to the Indian military.

Has she actually been sold to the Indian Navy, or have they talked about possibly maybe selling her if allowed and everyone behaves, maybe, to push out the rather unsuccessful attempt by the Indians to buy the Soviet carrier...

A quick google suggests the US offered the Kitty Hawk to the Indians for free! Maybe.
I'm guessing a loss leader to let the contractors get some sweet spares and planes deal.

Latest word I've seen suggests there will be no sale or transfer.
Which makes the question of why they did a multi tens of million dollar maintenance dock visit immediately before the decommissioning trip home so interesting.
I mean if she is no longer seaworthy, just tow her back.

The last word I saw was the India had agreed to new terms to get a Russian carrier, even though it comes four years after the original agreement. But who knows what kind of machinations go on.

I'll just add that the magnox alloy corrodes rapidly in water, so it's not possible to leave them to "cool" very long in the spent-fuel ponds. Typically the reprocessing facility is nearby for this reason.

Yeah, I suppose it is conceivabe that they planned to either move the spent rods out of country for reprocessing, though that would drastically increase chances of discovery, moving even a small volume of hot rods out of country and then presumably Pu-239 pits back to Syria; or, they planned to add reprocessing after completing the core - it'd take some months before the first rods needed to be pulled, and it is a small thing, wouldn't require a large facility, especially if you didn't mind being a bit messy doing it.

What a load of intelligence agency codswallop. If you go back and look at the satellite pictures of the Box, the truth will become clear: it was a copy of the Large Binocular Telescope enclosure. An unauthorized copy. Don't mess with the long arm of Steward Observatory.

Well, there you are: very silly - they should have copied the VLT, clearly.

they should have copied the VLT, clearly.

Right, because "Old Europe" is too timorous to retaliate.