Today is the 12th of december, and there are 13 days until christmas.
This means, of course, that the first of the yule elves came to town this morning.

As you know, Bob, there are thirteen of the Yule Lads, or jólasveinar, as we call them.
And they are not really elves, since their mother is a troll.
The childstealing, cannibal Grýla, of legend.

They come to town, one each day until christmas eve, and then leave in order, starting christmas day and finishing on the 6th of January.
They leave small treats or presents in the shoes of good children, if the kids know to leave their shoe out by the door or window. Strangely, our neighbour kids do not seem to have caught on to this, yet.
If you are naughty, you get a potato, or an onion.

Their arrival is critical, since any child who is so naughty as to not get a single piece of clothing, candle or a game before Christmas Eve, will be eaten by Jólakötturinn (the "Christmas Cat" – big as a house it is, silent, deadly). 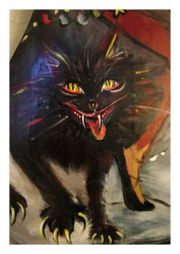 The lads are pranskters, and quite mean ones, none of your Ho, Ho Ho! Coke swilling softies. Stekkjastaur sneaks up on the ewes and sucks the milk out of their udders, though this is hard going as he is stilt-legged.

On the other hand, the munchkins find it very convenient to be in a multicultural family, especially since the Better Half is fond of the Feast of St Nicholas; my extended family feels presents should be given on christmas eve after dinner; while the in-laws go with the anglo-style stocking and christmas morning thing.

And the one time the Big Kid got a potato, she laughed so hard she fell over, and then came into the kitchen with a big grin and asked that we cook it for her… (it got donated to local wildlife as a compromise).

We are of course not talking superstition.
I mean, I don’t “believe” in elves.
I just know not to mess with them.
You leave their houses alone, leave a seat (1st class, natch) on the occasional flight for them, and maybe put out the occasional bowl of milk… elves don’t need your belief, and trolls of course don’t care, they just eat you.
I should note that Iceland’s one Nobel laureate treated the issue of elves in Icelandic culture extensively, so there.

Just remember, you must have an evergreen for the solstice festival, and you better burn it when you are done, after 12 days, of course.
If you do not, winter may never end!

Next one up, any hour now, is Giljagaur. Sneaky one.