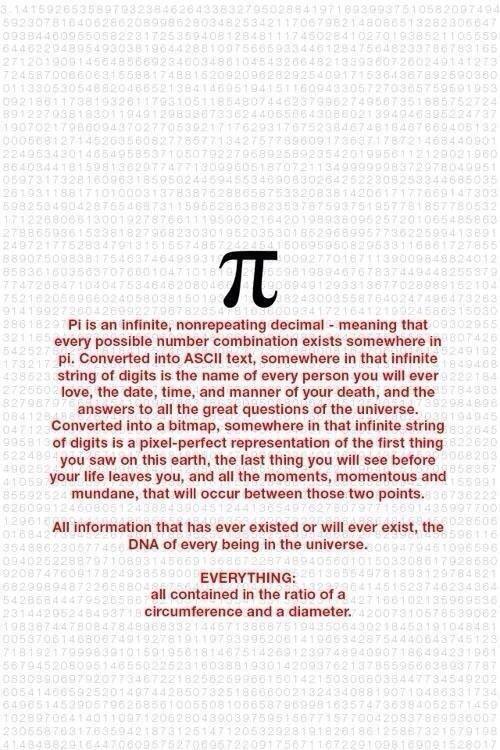 It got reposted by a bunch of people and provoked a tremendous amount of discussion (for a math topic, anyway), much of which was somewhere in the continuum between merely wrong and psychedelically incoherent. It's not a new subject - a version of the image got discussed on Stack Exchange last year - but it's an interesting one and hey, it's not all that often that the subtle properties of the set of real numbers get press on Facebook. Let's do a taxonomy of the real numbers and see what we can figure out about pi and whether or not it has the properties stated in the picture.

The Natural Numbers and Integers

These are the counting numbers: 0, 1, 2, 3, 4... There's an infinity of them, but there are gaps. If you have 5 dollars and you give half of them to your friend, you're stuck. The number you need is not a natural number. If we want to be able to deal with ratios of natural numbers, we need more numbers so we can deal with those gaps between the natural numbers. We can include the set of natural numbers with negative signs in from of them, and we have what's called the integers: ...-3, -2, -1, 0, 1, 2, 3... Later on I won't worry about explicitly discussing negative numbers, but of course all of the subsequent sets include negative numbers.

The square root of 2 is the most famous example of an irrational number. It's the number which, when squared, gives exactly 2. It's equal to 1.41421356237..., but the decimal representation never repeats. This is because there are no two integers A and B such that (A/B)2 = 2. You can get as close as you want: 7/5 = 1.4 is kind of close, and 3363/2378 is much closer still, but you'll never find a rational number whose square is exactly 2. This can be rigorously proven and means that the square root of 2 is irrational, and never repeats.

The square root of two is the solution to the equation $latex x^2 - 2 = 0$. This is an example of a polynomial with integer coefficients. Another random example is $latex x^6 - 3x^2 -29 = 0$, which happens to have the irrational number x = 1.84302... as one of its solutions. Numbers which are solutions to these kinds of polynomials are the algebraic numbers.

Does all this mean the decimal expansion of the square root of 2 includes any and every combination of digits?  Maybe. Maybe not.

In a precise but somewhat technical mathematical sense, "almost all" real numbers are irrational. Throw a dart at the real number line and you will hit an irrational number with probability 1. This makes some intuitive sense. If you just start mashing random digits after a decimal point, it seems reasonable that you won't just happen to make an infinitely repeating sequence. It turns out that the same thing is true of the transcendental numbers. "Almost all" real numbers are transcendental. But at the present time, even with hundreds of years of brilliant mathematicians pouring unfathomable effort into the problem, our toolkit for dealing with transcendental numbers is pretty sparse. It's very difficult to prove that specific numbers are transcendental, even if they pretty obviously seem to be. Is $latex \pi + e $ transcendental? Almost certainly, but nobody has proved it.

Here's a number called Liouville's constant which is proven to be transcendental: 0.110001000000000000000001000000... (It has 1s at positions corresponding to factorials, 0s elsewhere.) It was among the first numbers known to be transcendental and was in fact explicitly constructed as an example of a transcendental number. It's irrational, of course. It is an "infinite, nonrepeating decimal", as the Facebook picture puts it. But is my DNA in it? Heck no, my phone number's not even in it. Infinite and nonrepeating is not synonymous with "contains everything".

Is pi a normal number? Nobody knows. If our toolkit is sparse for proving things about transcendental numbers, it's almost completely empty for proving anything about normal numbers. There are a few contrived examples. The number 0.123456789101112131415... is normal in base 10 at least, and in fact it contains every finite string of digits, because it was constructed so that it would. It also satisfies the properties which Takei's image ascribes to pi, though it also shows that these criteria aren't especially profound. A string that contains all numbers turns out to contain all numbers, which is true but not all that impressive.

Mathematicians love proof. I'm a physicist. I love proof too, but I'm a lot more willing to work with intuition and experiment. Do the billions of digits of pi that we've calculated act as though they're distributed in the "random" way that the digits of an absolutely normal number ought to be distributed? Yes. Just about everyone suspects pi is absolutely normal. Same for e and the square root of 2 and the rest of the famous irrationals of math other than the ones that are obviously not normal. Numerical evidence is not dispositive though, and has misled mathematicians before.

If pi is absolutely normal, than Takei's image is true. If you can prove this conjecture, you will have boldly gone where no one has gone before.

Then S' is still computable and obviously absolutely normal in base 10. I have just run through in my mind a proof that it is normal in all bases. Later I need to write this down on paper and check it. Of course the first decimal digits of this number are 574389

I don't mean it's not possible in principle to figure out the digits and write them, I mean I didn't think anyone has actually done it. But this is probably a mistake on my part - I believe it turns out an uncomputable number which is one of Chaitin's constants is absolutely normal, and in fact despite its uncomputability it is possible to calculate the first few digits: 0.00787499699...

But it's silly anyway. If S is computable then any number of it's digits can be written down.

Just because a number is computable doesn't mean we know the algorithm to compute it. So while it is true that in principle we can write down any number of its digits, in practice we can't.

Just a few further comments which might be of interest -

It is possible to show that Liouville's Constant is not normal to any base ie it is the exact opposite of an absolutely normal number. This remains true if the non-zero digits of Liouville's Constant are replaced arbitrarily with any other non-zero digits. Hence the set of numbers which are not normal to any base is uncountable although by Borel's Theorem this set has measure zero. Of course this set contains all rational numbers.

It is rather amazing that the first proof that there exist numbers which are normal to some bases but not others was not found until 1959. Before that time it was an open question as to whether normality to a single base might be equivalent to absolute normality.

Champernowe's constant mentioned in you blog was shown by Mahler to be transcendental.

No "naturally occuring" irrational number has ever been shown to be normal or not normal to any base. The question as to whether the square root of two is normal to say base 10 may be an example of a precisely formulated totally clear question to which we will never know the answer.

Not sure why pi must be 'absolutely' normal, for the image to be true. Suppose pi is sufficiently 'almost' normal, in the decimal expansion we detect a slight surfeit of, say, '1's. Since the expansion is infinite, doesn't that mean the image is still true, just takes a little 'longer' for the image to emerge (there will be expanses of pi that will have sufficiently long stretches with a 'normal' distribution of '1's).

I'm convinced I've check this out exact same form of statement anywhere else, it needs to be more popular while using masses.

Doug - For what Takei says to be true it suffices that every finite sequence of digits occurs at least once in the decimal expansion of pi. This is a much weaker condition than normality to base 10. It is easy to define decimal expansions in which almost all digits are zero but every finite sequence of digits occurs infinitely often.

Thank you Annonymous, I understand. I'm not a mathematician, but infinity is fun. At some point in the expansion of pi, it must repeat the prior sequence of numbers. Call that sequence S1. So pi = S1S1 ... Then there must be another sequence S2 such that pi = S2S2S2 ... Ultimately you have an infinite repeating decimal so pi is rational. lol never mind.

The obvious answer is that, by the 23rd century, they've proven pi is normal. Sulu is just reporting this to us.