A Big Day For American Chess

It occurs to me that I haven't done a chess post in a while. It's possible that I'm the only one unhappy about that, but there's actually a big chess story in the news. You see, for the first time in nearly twenty years, an American chess player has defeated a sitting World Champion. The American player is Hikaru Nakamura. The champ, from India, is Viswanathan Anand. This all went down on Tuesday at the London Chess Classic. More than that, as a chess fan let me just say this: Boy howdy! What a game!

It is sometimes said that top chess players are either perfectionists or pragmatists. Perfectionists try to find the one perfect move in each position. They play the board, not their opponent. Bobby Fischer was a famous perfectionist. Pragmatists tend to focus on the idea that chess is a sporting event. They recognize that the game doesn't end when your position is objectively worse. Your opponent still has to find the right moves, and if you can create a position that is difficult to play you might end up on top after all. Among the world champions, Emmanuel Lasker was famously pragmatic.

To judge from this game, Nakamura hails from the pragmatic camp. It takes some mighty big cojones to play chess like this, but this time it paid off. We pick up the action ten moves in. Nakamura is playing black. 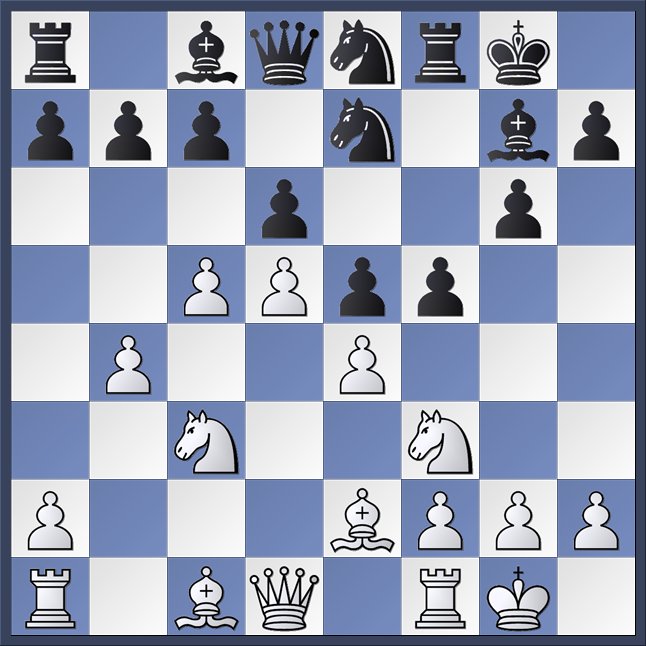 This is the famed Mar Del Plata Variation of the King's Indian Defense, an exciting variation in an exciting opening. The KID in general is not for the faint of heart, but it has certainly had its share of impressive defenders over the years. Gary Kasparov was a big fan, as was Bobby Fischer. For example, click here to see Fischer pummeling no less a player than Victor Korchnoi.

Skipping ahead five moves we see both players sticking with their plans:

By this time the commentators were mostly writing black's epitaph. In these sorts of openings, where both sides go all out for an attack, time becomes a critical concern. White has his standard attacking moves, black has his, and whoever gets there first is likely to win. But Nakamura has played the opening rather slowly. White's onslaught on the queenside just looks overwhelming. He has tons of space and his pieces are easily finding active positions. But black seems to need several more moves before he can generate a threat. The feeling was that black's g and h pawns, crucial to his attack, should be farther advanced than they are by this phase of the game.

A few moves farther and it really looks like black is getting routed: 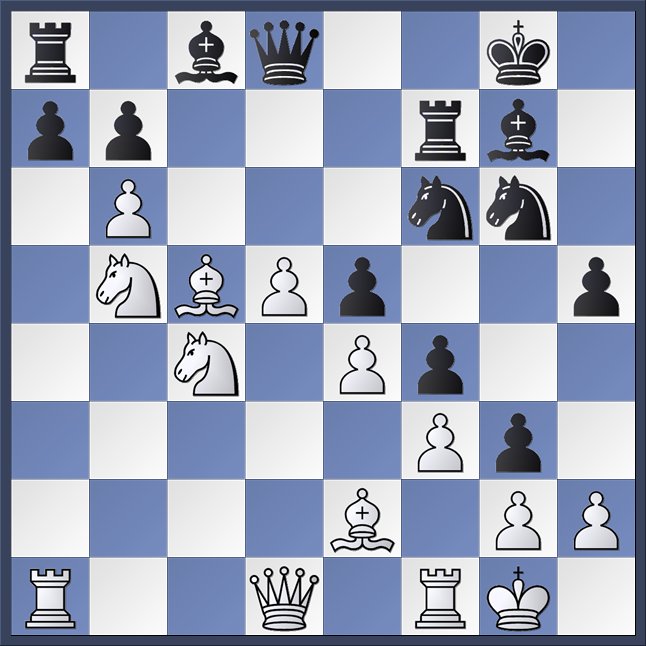 Even if you don't play chess, I think just optically you can see that white has complete control of the queenside (that would be the left side of the board). The computers were going crazy, believing white was just totally winning here. But Nakamura made an interesting observation during the post-game discussion. He said, “Probably objectively it's much worse [for black] but we're human. I don't really have to find any difficult moves here. I attack and if it works, it works, if it doesn't I lose horribly and look like an idiot. The onus is on Vishy to find all the right moves.” Indeed. Black has just one plan. Use his g and h pawns to pry open the kingside, transfer as many pieces as possible to that part of the board, and try to give checkmate. His moves come very naturally. They might not be sufficient, but it is still an easy position to play. But Anand, with the added burdens of knowing that he's winning and seeing numerous promising lines of play, still has to bring home the point. And with time pressure looming, even the great ones frequently get lost in the complications. 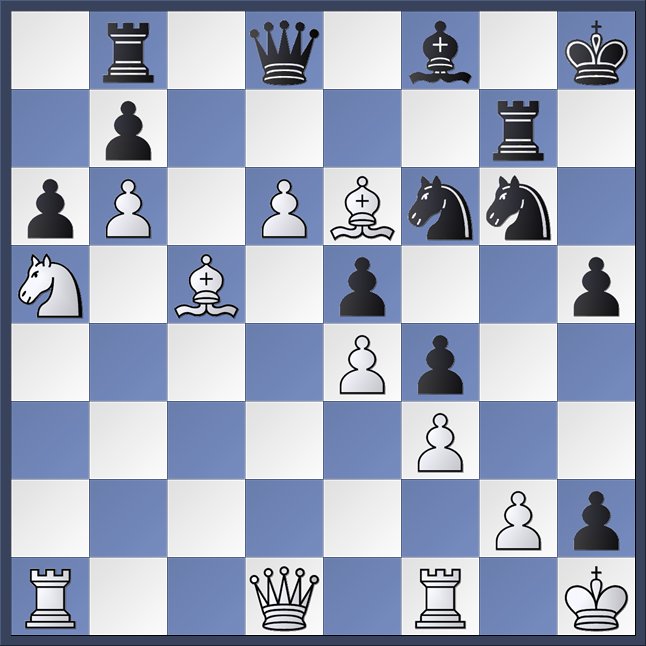 A few moves further and white is still very much in control. He retains his bind on the queenside, his passed d-pawn is scary, black is cramped and has weaknesses, and his kingside attack still doesn't look very scary. The computer makes a strong case that either 29. Bh3 or 29. Kxh2 are easy wins. Instead, Anand played the seemingly very natural move 29. Nc4? And with that one lapse in judgment all of his previous, excellent play goes straight out the window. The position goes from clearly winning for white to better for black. Psychologically it is very difficult for a human player to adjust to that change of affairs. Chess is a cruel, hard game!

Why is the move so bad? It seems obvious enough, bringing the knight to a strong central square, form which it defends white's strong points on b6 and d6, and attacks black's grotesquely weak pawn on e5. But look more closely and you will notice that white's bishops, and his knight, are all unprotected. There is an old saying in chess that goes by the acronym LPDO, “Loose pieces drop off!” Anand is about to be reminded of that.

Nakamura played 29. ... Qe8! After black storms his h pawn up the board he will move his knight to h4 and his queen to h5. Suddenly his kingside attack is formidable. White, meanwhile, must move his attacked bishop. The obvious move would be Bh3. From there the bishop defends the kingside and prevents black from activating his queen rook via the c file.

But he can't play Bh3, because black then has the miraculous Qb5!, forking white's unprotected knight and bishop on c4 and c5. White loses a piece and the game. That means white is forced to play 30. Bd5. And with that black's attack has gained a tempo, and white has been forced to misplace a key defensive piece.

From here it's all downhill for Anand. 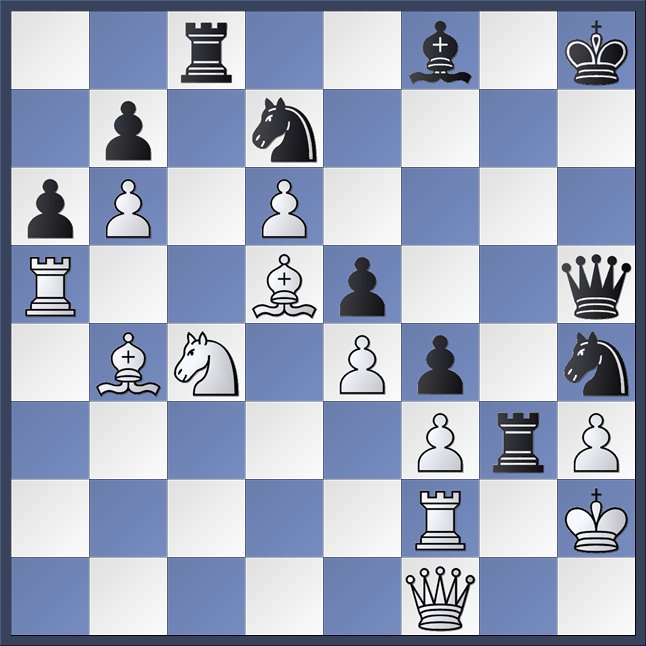 With just a few more moves the action has shifted completely over to the kingside, which is bad news for white in these sorts of positions. Black's rook, knight and queen are an impressive fighting force, and white is in full on grovel mode trying to find a way to draw. The glory days of his queenside attack are long gone. He still has lots of pieces over there, but at the moment they are all just standing around. 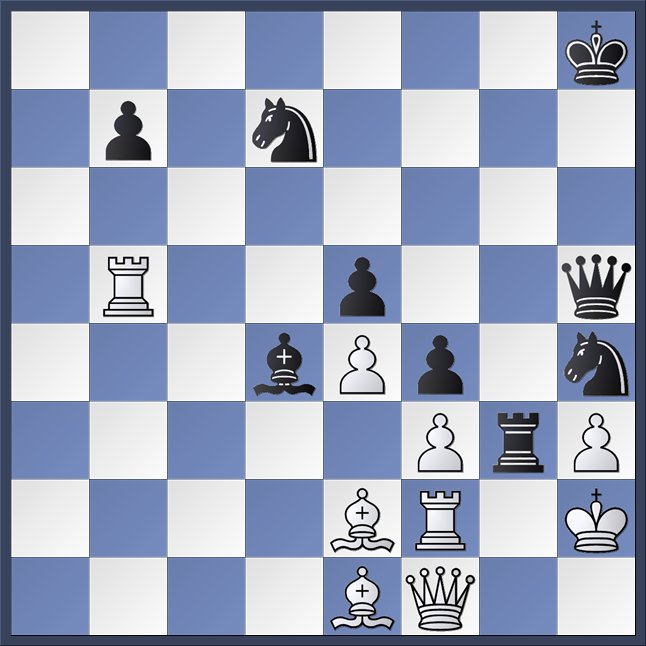 Carnage. White's rook on b5 is wondering where everyone went, while the rest of white's army is glumly trying to defend all of the weaknesses. Black's dark-square bishop, which has spent most of the game hemmed in behind its own pawns, has become a monster on d4. Black will simply take the white rook on f2, after which f3 will fall, and then e4, and then whatever square the king is on.

For the record, here's the final position: 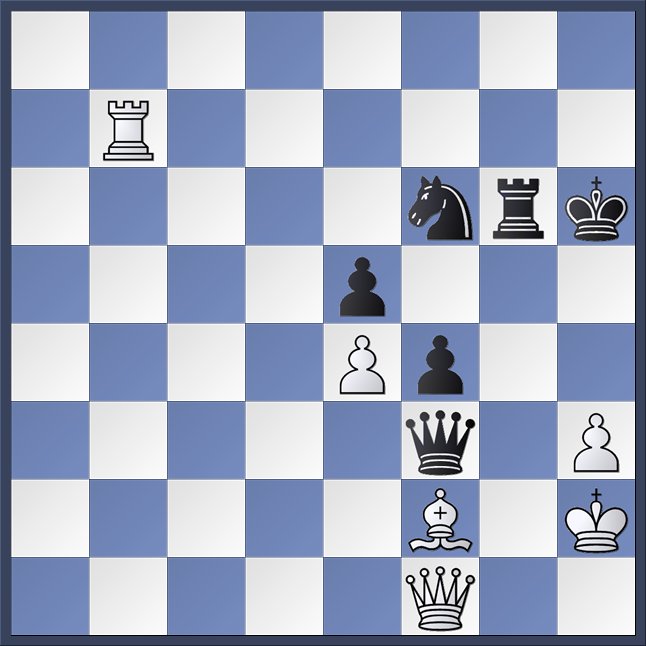 Anand had seen enough and resigned. His pawn on e4 is about to drop, after which black will have two connected passers in the center. Meanwhile, his attack still rages. If white tries to do anything remotely active he will get checkmated. Game over!

So, congratulations to Nakamura on his fine win, and for possessing the sangfroid to play chess like this. A big day for American chess.

I for one enjoy your forays into chess. I used to follow it a lot.

I take it you're familiar with Nakamura's (in)famous game against Rybka?

I had never seen that game. I wonder why the computer fell apart by playing c4 at move 174.

Thanks for this, very exciting, and your commentary is quite amusing. I was looking at Ng4 for Black after the diagram which says "it really looks like Black is being routed." Not sure it works, or even if it's Black's move there, but it's interesting to consider.

Also, I was wondering about 30 Qb3, which was why I wasn't sure about 29 ... Qe8 (which I thought of, given your hint that LPDO). It protects the bishop as well as the b5 square, and the bishop doesn't have to move off the c8-h3 diagonal. (Not to second-guess the world champion or anything ...)!

Jason: in the infamous game against Rybka, Nakamura exploited the computer's desire to avoid a draw by 50-move rule. This happens at several points in the game. At move 174 the computer's evaluation was that even after giving up the c-pawn it was ahead in material (two exchanges) so this was preferable to allowing a draw.

At move 174 the computer's evaluation was that even after giving up the c-pawn it was ahead in material (two exchanges) so this was preferable to allowing a draw.

And it appears Nakamura had to give up those pieces on purpose in order to exploit Rybka's aversion to allowing a draw when it thinks it's ahead. I like that they posted that game on April 1.

The best thing about that game was the time control; 3 minute clocks, no increment. 271 moves, including 60 or so at the end where Nakamura was just showing off. Parking five pawns on the second rank, promoting them all to minor pieces, deciding he had too many minor pieces and saccing a few, promoting his last pawn, then chasing Rybka's king around the board with five bishops before finally manouvering him right into a corner for checkmate, with all six of his remaining pieces touching.

greetings by
http://flickrcomments.wordpress.com/2011/12/14/throw-down-the-gauntlet/
talking about Bobby Fischer - I've set a link to your side there ...

I just want to say I like your chess posts. Please keep doing them. Go Nakamura!

Perhaps Daniel King (or an editorial assistant on the Guardian) also reads your chess posts?