Here's Spider (the orange one) and Emily from yesterday, having just been loaded into the back of my car. 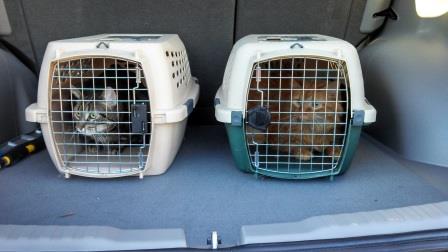 See how happy they look! They were both expressing their joy with loud, some would say shrieking, meows. That's OK folks, no need to thank me.

As it happens, I also have a very large carrier that could fit both of them comfortably. Part of me was tempted to throw them both in and say, “Time to settle your differences, folks.” I decided against it; too reminiscent of Thunderdome. Two cats enter, one cat leaves.

Of course, we all knew where we were going: 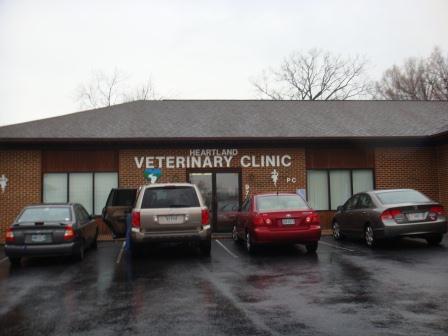 Emily stopped meowing as soon as the car started moving. I wasn't comforted, since I knew what was coming next. Yes, there it was. That unmistakable aroma that makes you say, “Only one thing smells like that!” Very mature, sweetie. The joke's on you, since this just means you have to get a bath when you get home. Spider, to his credit, remained continent. But let me tell you, that beast has an impressive set of pipes on him!

It was a slow day at the vet, since I had one of the last appointments on Friday afternoon. The cats are fine, by the way, it was just time for their annual check-ups. Actually, it was time for Emily's annual check-up. Spider got dragged along since this was my first trip to the vet since I took responsibility for him, and I wanted the vet to get a file started.

Emily was put through her paces first. She was taken “into the back,” carrier and all, where she got cleaned up and had some blood drawn. Spider walked out of his carrier and sulked underneath the chair.

I think he sensed that he was next.

Emily returned, now with a pee pad generously donated by the vet for the trip home. She'd lost two pounds since last year. Good girl! She's still rather heavy at thirteen pounds, but a considerable improvement nevertheless. I'll leave it to your imagination what she was thinking here. 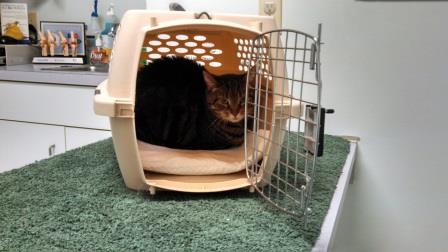 Then it was Spider's turn. After the vet brought him back and completed her examination, he was perfectly happy to walk into his carrier on his own. Good boy!

Then it was back home. I let Spider out of his carrier, and he promptly ran down to his basement room to sulk in peace. Emily got her bath, and now she will smell like shampoo for a few days.

But the best part is that they are very forgiving. An hour after the whole ordeal, everything was back to normal. Both of the little darlings were sweet as could be towards me, and Emily was hissing at Spider. See, normalcy!

Actually, there's been progress on that front too. Last week it briefly warmed up enough to open windows for a few hours. That led to this charming moment: 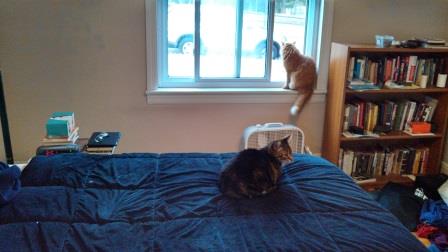 Everyone was calm! I think Emily still doesn't like Spider, but she's slowly becoming resigned to the fact that he isn't going anywhere.

This is Emily: She sure does look comfortable, doesn't she? And why shouldn't she be? In a tour de force of inductive reasoning she figured that today would be like the previous 364 consecutive days, at least to the extent that I wouldn't even consider stuffing her into a box and bringing her…

Winter break is the time to complete all of those annoying chores you've been putting off during the term. For example, yesterday my car passed its inspection. Woo hoo! And today, Isaac and Emily passed their inspection. By which I mean the vet found that they're in good health (though Isaac,…

Back in August, I welcomed Spider the cat into my home. So how did that all work out? That's Spider lounging in his basement room, aka the chess room. To judge from the liberal coating of cat hair, I'd say he likes that futon quite a lot. Spider's not much of a jumper, so I have no fear that he…

I Have A New Cat!

I think it's been obvious for a while now that my enthusiasm for blogging comes and goes. Lately, it's been in a “goes” phase for longer than usual. But, I do have one piece of personal news that I feel compelled to share with all of you. Have you guessed what it is? (The title might have given…

My cat is almost al black and very loyal to me. Smart cat. But she hates the vet. The Humane Society likes her but no sure if she likes them.

Oh, the bygone days when my cat was full of inner fire. Four people were needed to literally lie on top of her so that the vet could draw some blood, which was accompanied by The Siamese Yowl, also known as They're killing babies around here. Now she's an elderly cat so she limited herself to a stink-eye and loud complaining while she sits moreless calmly on the examination table.

For the uninitiated: Compared to generic cats, Siamese are much more muscular and noticeably slicker so they're able to wriggle out of everywhere before their humans learn a few tricks.

My cat is a sweetie who gets along even with the vet - fortunate, as she spent most of Friday and Saturday barfing and is going to see him on Tuesday if she doesn't look really healthy for the next 24 hours - but she does NOT like riding in a carrier and often gets carsick. For the first few years we had her she would mew all the way to the vet's office every year then be silent all the way back - unless we happened to make a detour that took us a block or two past our house's longitude, and immediately we'd hear "mew?!" She had been found by a friend of ours out in the country begging for a ride. We always wondered if someone had dumped her there, and if so, whether when we put her in the car on an outbound trip she feared that we might be taking her out to dump her, so that arrival at a vet's office came as a relief. Not to say that our little princess is insecure, mind.