My new issue of Chess Life showed up in the mail, and it included coverage of the Sinquefield Cup from this summer. (Chess Life has a long lead time). Anyway, in the game between Magnus Carlsen and Hikaru Nakamura, Nakamura played the Queen's Gambit Declined as black. He was very lucky to draw the game. Nakamura is better known for playing very aggressive openings like the King's Indian and Dutch; the cramped maneuvering of the QGD is less well-fitted to his style. Commenting on the game, Gary Kasparov recommended that Nakamura stop playing the QGD. He said, “At least if you lose with the KID you'll go down kicking and screaming. With the QGD you'll just be screaming.”

Ha! Chess humor. Gotta love it. And this week's problem features a bit of humor as well. We've been focusing on endgame studies for the past few weeks, so it's time for something different. This problem was composed by someone named Kratschmer in 2001. It calls for white to move and mate in two. 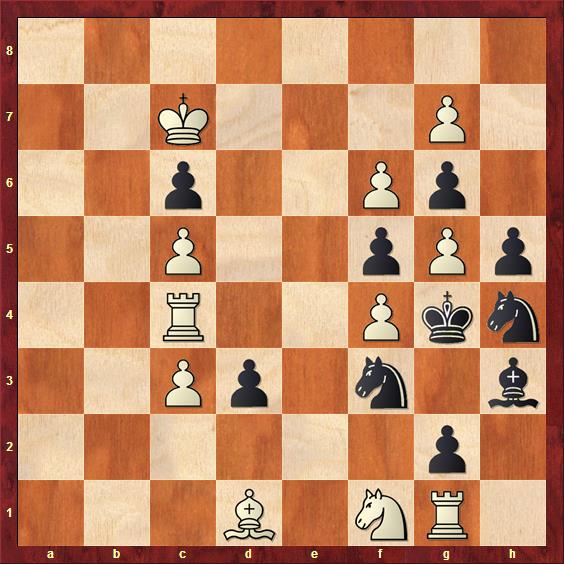 That's actually a pretty easy problem, especially once you notice that black only has one legal move. We play 1. g8N d2 2. Nh6 mate.

If that were the end of the story this problem would never have been published. But there are actually four more phases. In the second, we replace the white pawn on g7 with a knight, as shown below: 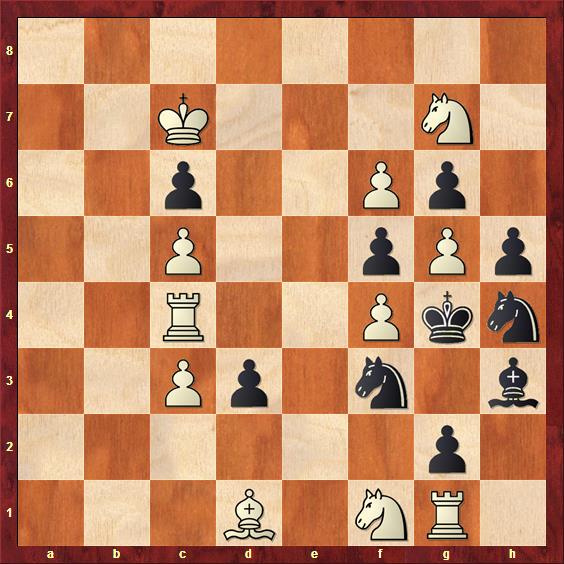 The stipulation now calls for white to move and mate in three. Now white has to be careful, since black is close to being stalemated. The solution is 1. Ne6 d2 2. Nd4: 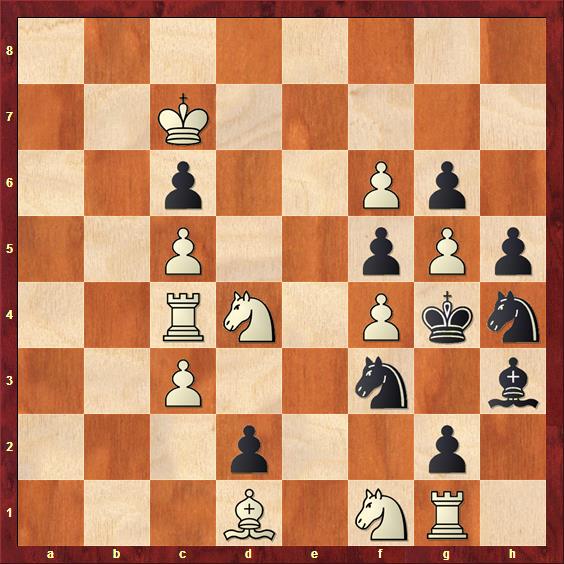 For the next phase we replace the white pawn on g7 with a bishop, giving us this for a starting position: 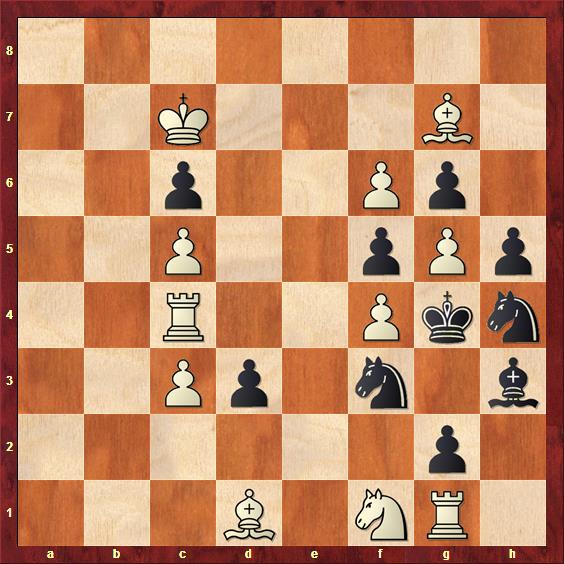 This time it's white to move and mate in four. Again we have to pay careful attention to releasing the stalemate. White employs the same basic approach as the previous phase: 1. f7 d2 2. Bd4: 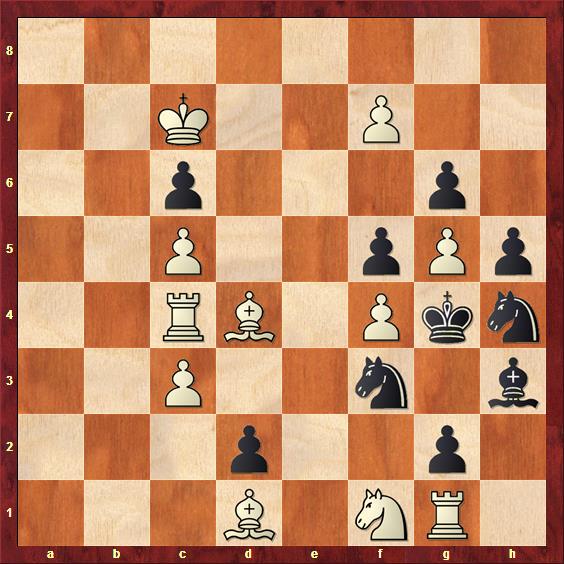 Have you guessed the next phase? That's right! We replace the white pawn on g7 with a white rook: 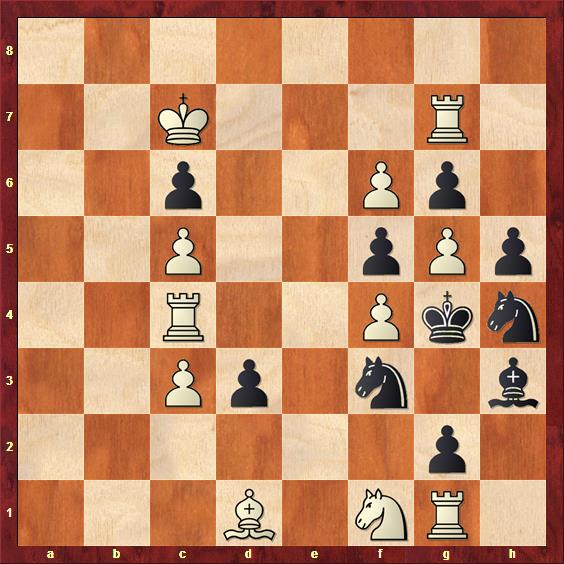 This time we have white to move and mate in five. Since the rook on g7 cannot break the stalemate by interposing on d4, we must use a different approach. 1. Re7 d2 2. Re2 Nd4: 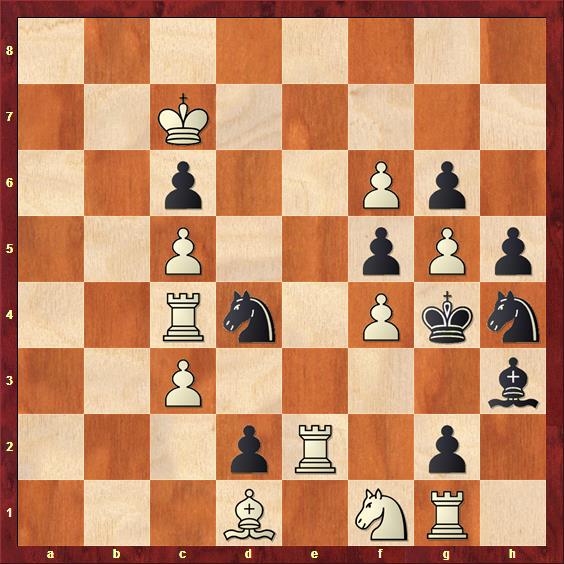 The big finale is to start with a white queen on g7: 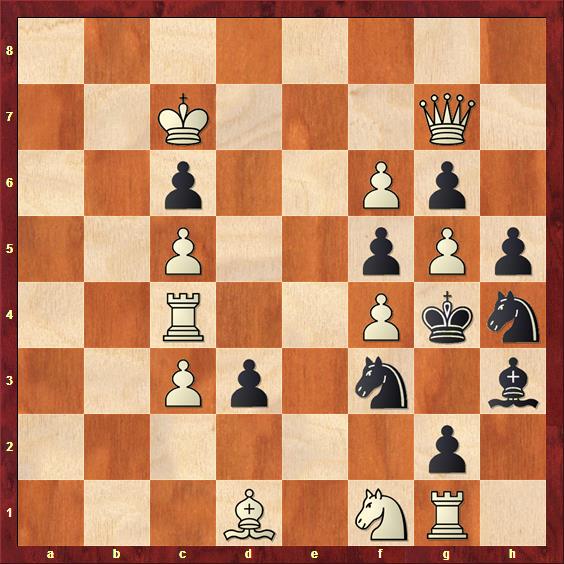 This time it's white to move and mate in six. But a queen cannot release the stalemate by providing an interference unpin at the right moment. So we must resort to this: 1. Qe7 d2 2. Re4 fxe4 3. Qxe4 Nf5: 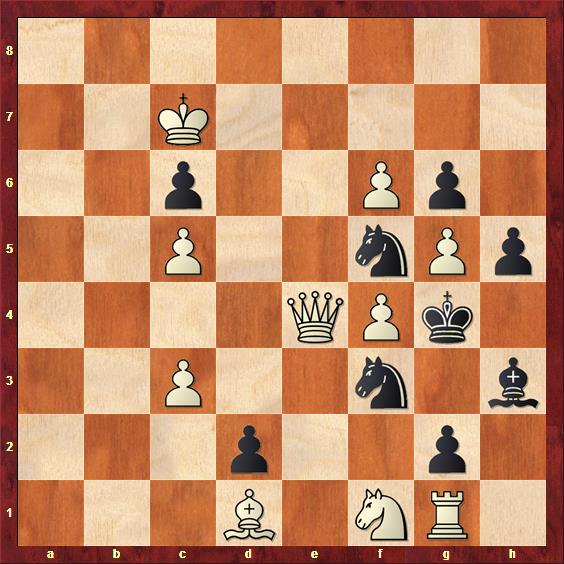 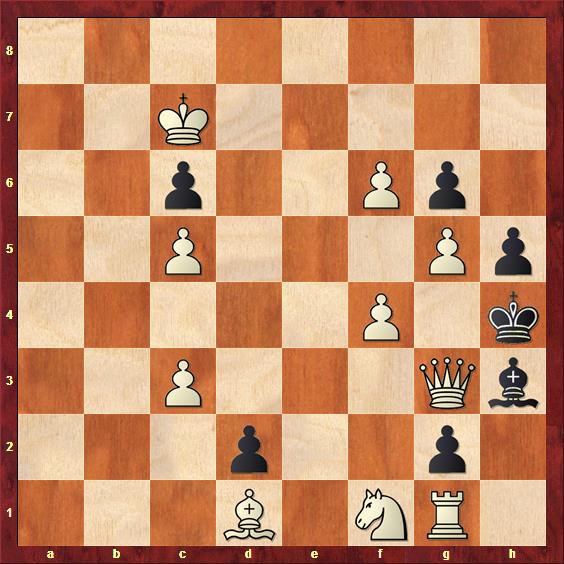 Do you see the point of it all? The more powerful the piece that starts on g7, the more moves and the more complex the strategy required to give mate. The strategy behind the various stalemate releases is interesting enough to make this more than just a gimmick problem.

Incidentally, this is another problem that comes from the book The Joys of Chess by Christian Hesse, which is probably my favorite chess book of all time. Not the most instructive, but certainly the most entertaining!

It's time to take a break from helpmates and return to selfmates. This week's problem was composed by Andrey Selivanov in 2014. The stipulation is selfmate in three: Recall that in a selfmate, white plays first and forces black to give checkmate in no more than the stipulated number of moves.…

Throughout this series I have endeavored to bring to your attention some of the major themes that problem composers use. So far, though, there is one big one that has not been featured. I am referring to Allumwandlung, typically abbreviated AUW. This is a German word that translates loosely as “…

Having taken the last two weeks off, Sunday Chess Problem now makes a triumphant return! This week I have chosen a wonderful direct mate problem by Valentin Rudenko, composed in 1983. It deservedly won First Prize in its tourney. White is to play and mate in four: This problem showcases a…

Well, by the time I got to the Rook variant I was thinking this was pretty cool stuff. At the end, I realized that each "better" piece was taking a move longer to perform the task and I think this is quite funny.

And the book looks intriguing too. Thx Jason.

BTW I looked at that Carlsen- Nakamura game. It is difficult to believe that anyone could draw against Carlsen after about 30 moves of that game! Incedible tenacity by Nakamura. And what a great tournament field! In the USA! Also hard to believe.

Interestingly, my computer doesn't find the rook mate even after several minutes (and it took a while to find the knight one, and even longer to find the queen one), preferring to play 1 f7 d2 2 Nxd2 to win prosaically. I'm sure it would find them eventually, and certainly the line it finds still wins. This is a bog-standard SCID vs. PC with Stockfish.

Highly entertaining.
JR, do you like miniatures? Recently I met a stunning one by Dutchman Henri Weenink, 1922:

The winning move is amazing.

Btw Weenink was a mathematician.

That led me to Bb1!, since I realized that would drive to the black king to a bad square.

The computer (Houdini) quickly notices Bb1 and scores it at +8 for white. But it also recommends various other plausible moves for white, scoring them at +2.5. But if you start playing it out you quickly realize that the computer is not making any progress.

I know Weenink from seeing his name in various chess problem magazines. I didn't know he was a mathematician though!