My reward for winning in Round One was to be paired up for Round Two. My opponent was the top seed in the section, with a rating of 2179. I received my second white in a row. Here's what happened.

I started with my usual king pawn, and he replied with the Modern Defense. This was a fine how do you do. The Modern is a rare bird at the highest level these days, though grandmaster Tiger Hillarp Persson has defended its honor. In the Modern, black simply allows white to occupy the center and gain space, believing that he will later be able to chip away at white's position from the sides. The idea is that white's big center is like an expensive house. Sure, it looks good when it's new. But upkeep is expensive, and things can quickly go downhill. Sometimes white just says thank you for the extra space and strong center and then bulldozes black clean off the board. Other times black's counterplay succeeds, and white is left muttering about how he could have blown such a good position.

In Part One I mentioned that I had spent a fair amount of time on openings in preparation for the event. Sadly, the Modern Defense was not one of the openings I worked on. So I played a relatively quiet system of development (not wanting to explore the insanity that ensues if white plays a quick f4.) Here's the position with white about to make his ninth move. 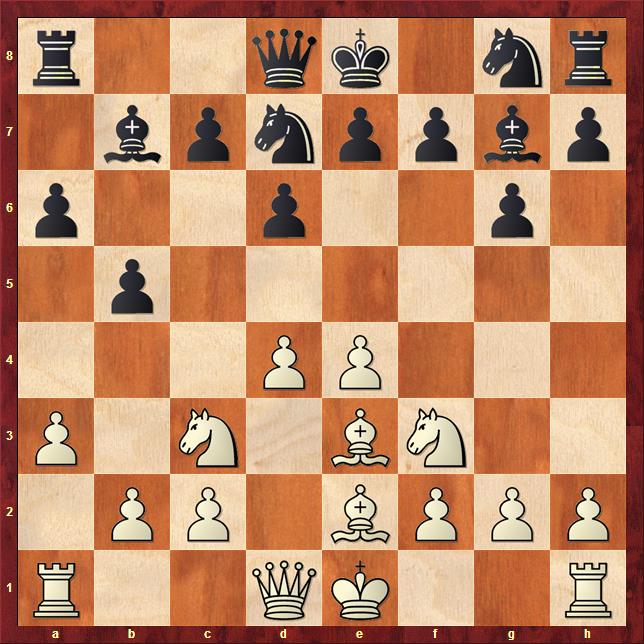 I don't think I've made any big mistakes to this point, but there is one sign that something has gone a bit wrong for white. It's that move a3 I played on move seven. Of course, that was a response to a looming b4 move from black. Typically, though, if white is worried about a b5-b4 attack from black, then he ought to play an early a4 to prevent it. The point is that a3 is a purely defensive move, while a4 gains space and cramps black's queenside. This theme arises in certain lines of the Sicilian Defense as well.

But this is not a huge deal, and things continued more or less normally until we reached this position, with black about to play his thirteenth move. 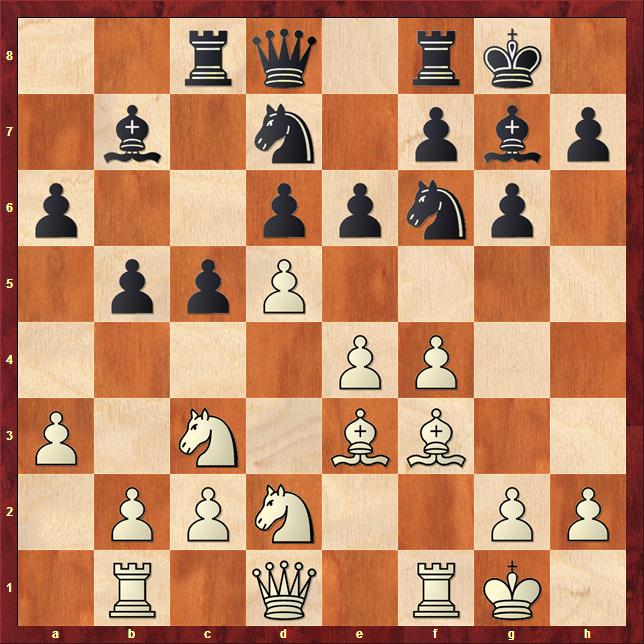 Even sadder than me missing this possibility is that my opponent did not miss it. After the subsequent moves 16. Nb3 Re8 17. Bc1 we have this position. 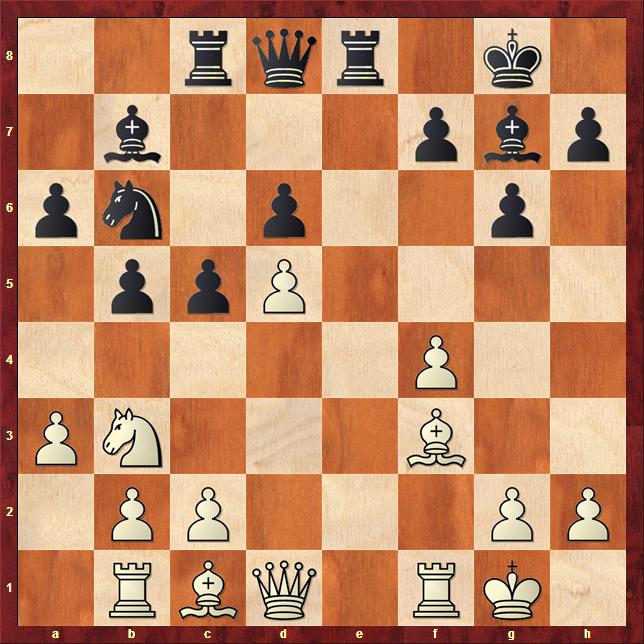 My opponent continued to play strongly. I was expecting black to play Nc4, probably followed by doubling rooks on the e-file. White's in trouble, but the game continues. Instead my opponent played 17. ... c4, which the computer confirms is the strongest move. 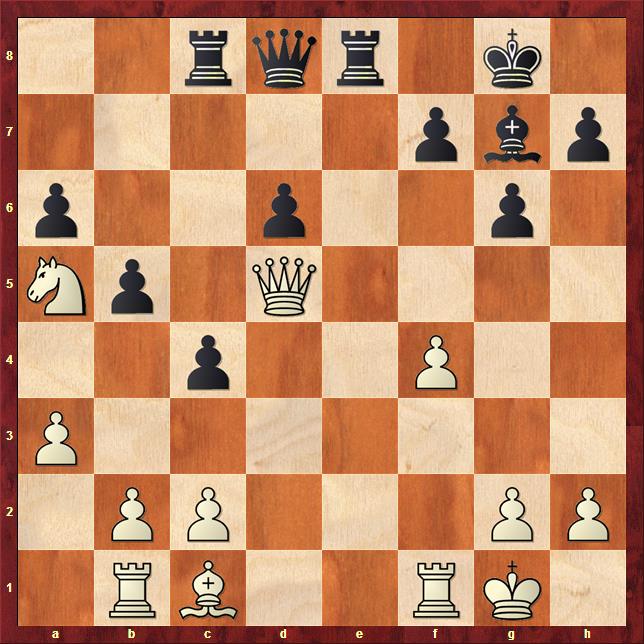 What's going on? Plainly, black is going to regain his piece by taking the knight on a5. White is then counting on recovering his pawn on d6. The trouble is that after 20. ... Qxa5 21. Qxd6 Rcd8 22. Qc6, black has the crushing 22. ... Re1! After the subsequent moves 23. Qf3 Qb6+ 24. Kh1 Qe6, it's just complete domination for black. The position is already resignable for white. If white takes the time to play 21. c3 to prevent this, then black just plays his Qb6+ tempo and keeps his extra pawn, again with an overwhelming advantage. 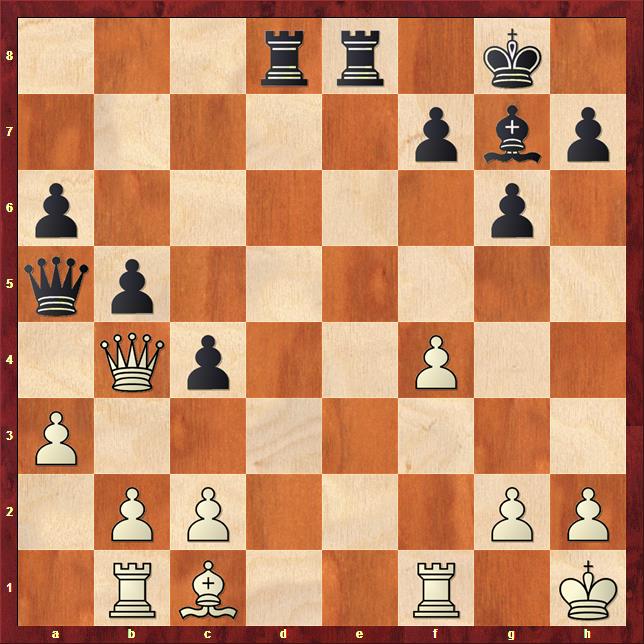 He should have done this anyway. After 23. Qb4 Qb6, it's just complete domination for black. Just look at white's queen, for example, which has no moves. Black's rook is coming into e2, his queen is marauding, and white is hard-pressed to find moves that don't just lose on the spot.

Happily for me, this is where black really blew it. He traded queens. I'm sure his thinking was that with all of white's pieces on the back rank, and with black's rooks so beautifully placed, the position should just be a win for black.

But things are not so simple! The first problem is that the queen trade opens the a file for my rook, which takes aim at the weak pawn on a6. So right off the bat, one of white's pieces finds activity, while one of black's rooks is consigned to the defense of the a6 pawn. The second problem is that black has no way to turn the screws. I'm just going to play Kg1-f2 and Be3, and there's nothing black can do to prevent this. If his rook ever invades on e2, I'll just challenge it with Rf2. If he then goes to e1, I just challenge it again with Rf1. Either we repeat the position or he retreats.

And that's just how things played out. There was a lot of piece shuffling, as black tried to find a way in, but there was nothing doing. With black about to play his thirty-ninth move, we had this position. 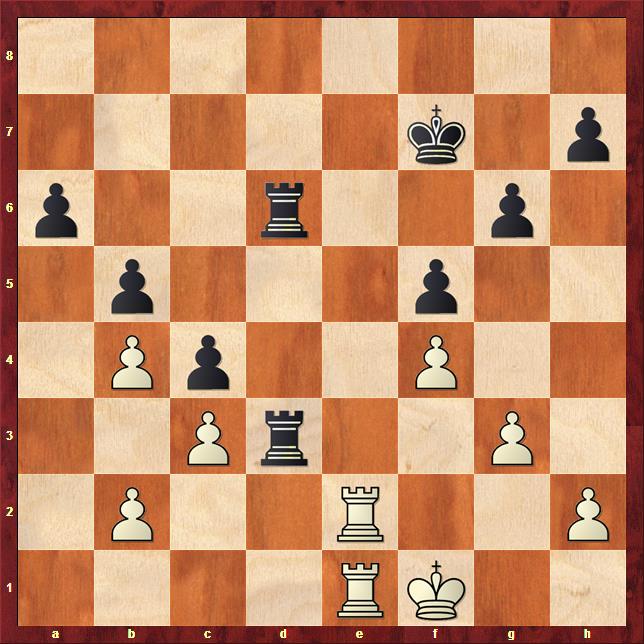 White's not even worse anymore. After Rd2 for black all of the rooks came off the board, and pretty soon we were left with this. 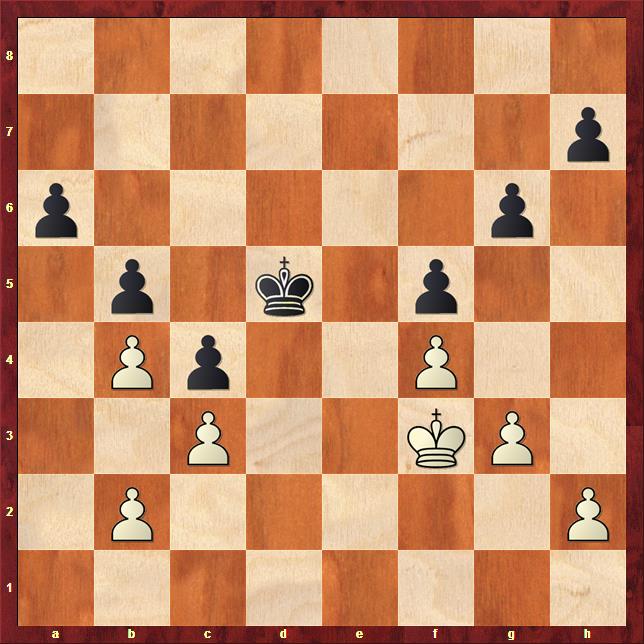 Triple zeroes. This is just a stone-cold draw.

So I survived again! The large difference in our ratings netted me around seven rating points. Together with the four points from the first round, I was now at plus eleven. Whoo hoo!

I was now 1.5/2, though with more skillful play by my opponents I could easily have been 0/2. Alas, my luck ran out in round three. My opponent was rated 2147. I had black. The opening was a Giucco Piano. That's Italian for “Quiet Game,” though I have to say I've never found it to be an especially tame opening. (Interestingly, there is a variation of the Giucco Piano known as the “Giucco Pianissimo”, or “very quiet game.”) Here's the position three moves in. 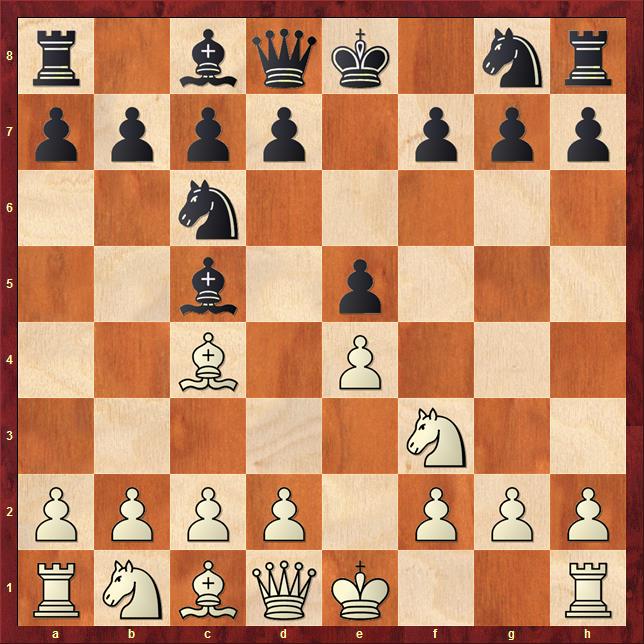 Now, for a long time the Giucco Piano was considered a bit insipid for white. The overwhelming choice for white's third move was Bb5 instead of Bc4, leading to the Ruy Lopez. The feeling was that Bb5 just put far more pressure on black's position, and generally left white with more attacking options. Recently, though, there has been a resurgence of interest in the Giucco at the highest levels, as the Berlin variation is proving to be a tough nut to crack for black in the Ruy.

At any rate, play followed normal channels for a while. Here's the position with black to play his eighteenth move. 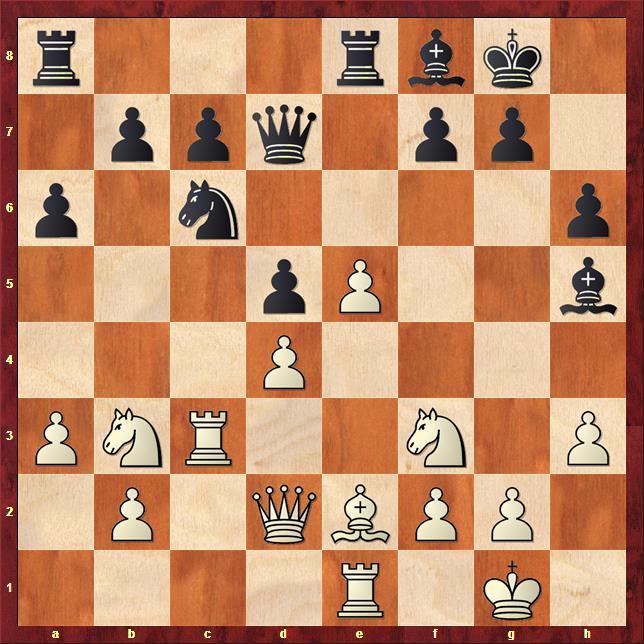 The computer is generally complimentary of my opening play, suggesting only small improvements. White has only a small edge here, a state of affairs that would have persisted had I played, say, Nd8-e6. Instead I blundered with 18. ... Re6. Seemed like a nice active move, but it runs into the shot 19. Ng5!. Suddenly black is in big trouble. After something like 19. ... Rg6 20. Bxh5 Rxg5 21. Bg4, black's rook is quickly going to be trapped. His best shot would be to sac the exchange at that point with 21. ... Rxg4, but that would not be a happy move to make. 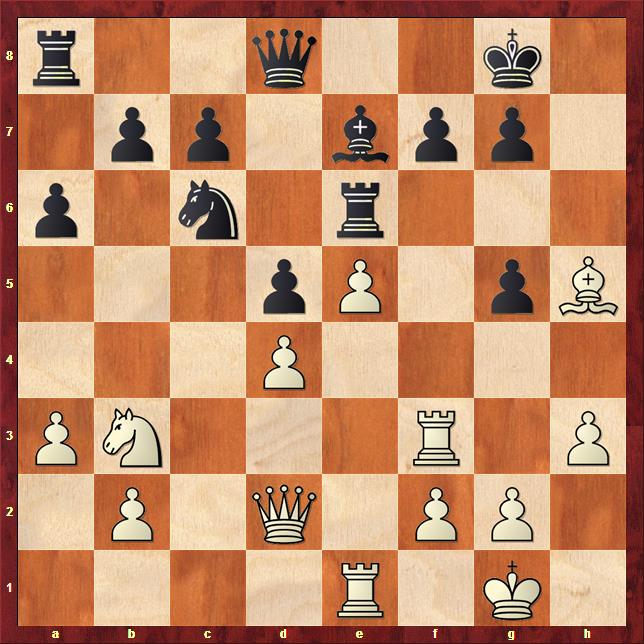 This is an interesting moment. The computer points out that black is just fine after 22. ... g6, followed by f5. We would get play similar to what happens in the game, but the white squares on black's kingside would be far more secure than they were in the game. But I was already in time pressure, and panicking over the way the game was going. So I played the immediate 22. ... f5, which does not work. After the moves 23. exf6 ep Rxe1+ 24. Qxe1 Bxf6 25. Qe6+ Kh8 26. Qg4, we have this position. 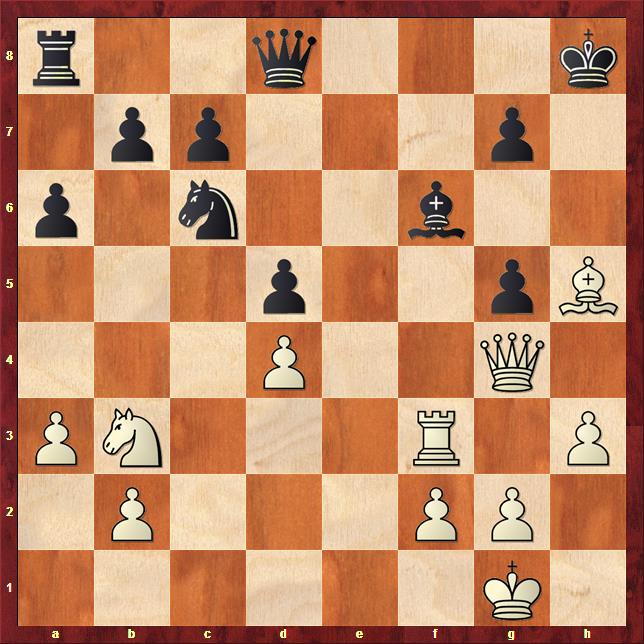 The threat is plainly Bf7, followed by Qh5 mate. Black can continue the fight with Ne7-g8, but he would still be lost. The problem is that white's knight on b3 quickly joins the attack with Nc5-e6, and black's kingside just has too many weaknesses. Still, white would have had more work to do in that line.

So that was a bummer. Still, in some ways I felt less bad about that game than I did about the first two rounds. Obviously my calculation blows, but I already knew that. What I was happy about was that I got through the opening pretty easily against a strong opponent. This is because the Giucco Piano was one of the openings that I specifically studied in preparation for the event. It was nice to see some concrete payoff for the work I had put into the event.

Losing this game cost me ten rating points, leaving me at plus one overall. Positive territory (Whoo hoo!), but less than the four points I needed (D'oh).

Which set up my fourth round game, which ended up being my most dramatic of the tournament...

Your expensive-house analogy of playing against the Modern Defense is spot-on. It is certainly interesting that the "zwischenzug" 20...Qb6+ turns out to be such a sour note dissipating much of Black's advantage.

Your third-round game is a classic example of how quickly things can go wrong when you are playing a middlegame with opposite-color bishops and weaken the wrong-color squares. Ouch!

Can't wait to see round 4. Great descriptions of these games!

Glad you like them! I find it cathartic putting them up.