Science is always nonpartisan, but it is always political: Fool Me Twice 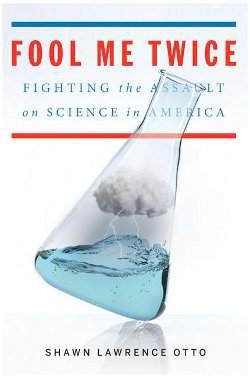 Fool Me Twice: Fighting the Assault on Science in America

" was officially released last night in Minneapolis with appropriate fanfare and celebration. Everyone who gets to know Shawn likes him from the start and quickly learns to respect him and eventually hold him with a certain amount of well-earned awe, and like any book, we've all seen this one coming for quite some time. (I have an old pre-release copy in which every page is "00" but, surprisingly, the front cover is just like the final form.)

Shawn gave a talk at the release party, but since he is held in such high esteem, there was a problem deciding how he would be introduced. A book as important as "Fool Me Twice: Fighting the Assault on Science in America" which examines the increasingly insignificant role science plays in the policy making process, written by the much beloved Shaw Otto would require an equally important and beloved personage to make the introduction. And, if such a person were to go on stage to introduce Shawn, there would have to be a fairly significant and widely respected person to introduce that person as well. And so on and so forth. I hear there were several meetings about this, and the UN was called in briefly to settle the evening's program, and a solution was worked out that was more than acceptable.

The event was held at The Loft Literary Center. If you carefully follow my blogs and analyze every word of them, you'll immediately figure out that I've written of the place before (see The Silence of the Muffins) as part of my more general discussion of coffee shops. One way to manage the problem of extreme notoriety in your speakers and introducers is to have the director of the host institution start things off, so Loft Director Jocelyn Hale began the program and in her remarks linked Shawn Otto and the Loft so we would all know why we were here instead of some other venue. Shawn's been involved in this local iconic institution, where I should mention Julia has taken a number of writing classes, for years, and is instrumental in getting their distance learning program off the disk and onto the net. After providing this helpful context, Jocelyn introduced poet and journalist Jim Lenfestey. Jim was an editorial writer for the Star Tribune (for those of you who are not local, this is Minneapolis' big newspaper and is considered one of those dailies on the cusp of big local and small national, probably on the local side and increasingly so as print media srinks and retracts, which is part of the problem Shawn addresses in his book, by the way). James talked about Shawn, but his main job was to introduce the next speaker.

And that was to be Don Shelby. Again, if you are a faithful reader of my blogs, you know of Don Shelby because I've discussed his battles against climate skeptics in the state Legislature (see: Minnesota AGW Denialist Jungbauer Disembowled by Respected News Anchor Don Shelby). If you are Minnesotan or Western Cheesehead, you know Don because he is the Walter Conkrite of the Twin Cities; An Emmy and Peabody Winning news anchor for our local CBS affiliate, WCCO. And, for those of you interested in climate related issues, you'll know of him as the guy on the same tv news show as Paul Douglas, who was not there last night. Don retired from his anchor position very recently.

I won't go into Jim's introduction of Don partly because certain references are not work safe, but I will say this: It is great to see someone emerge from the role of reserved sage behind the news desk with such energy and with so many diverse arrows in his quiver as Don Shelby has done. He is acting, writing, speaking out, and generally making a nuisance of himself; If you are part of the conservative political Establishment in Minnesota you will not have seen him coming and you are probably a little dizzy right now. (See MinnPost for more of Shelbey). 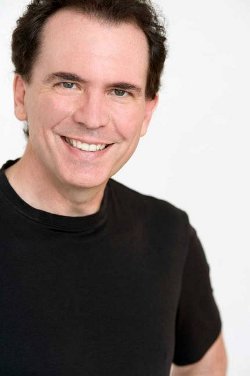 Then, Don Shelby beatified Shawn Otto. It was a great introduction which mentioned Shawn and his wife Rebecca's regionally famous home (see: Rebecca and Shawn by Mike Haubrich and Breezy: A Renewable Energy House by Shawn and Rebecca Otto). But Don focused mainly on the book, which I will only discuss briefly here because I intend to write more about it in two or three upcoming blog posts. I think the key thing Don Shelby points out about Shawn Otto's book is the fact that one can not, or should not, skim it. Fool Me Twice

is a rare book because it does two things at once that you hardly ever see: The book engages the reader because it is so well written; and it makes you think, almost too much. Your head won't hurt, but understanding the broad and scary implications of the fact that our society has cast off science as a relevant factor in policy making will make your heart hurt. You will think, and think, and think when you read this book. You will think about your grandchildren and how they may actually have a chance to live in a miserable dystopic world if we don't act effectively and quickly.

As a scientist, teacher, and science communicator who has been doing battle with creationists since the ink on Genesis was wet and more recently with other denialists, I view Fool Me Twice: Fighting the Assault on Science in America as the best available white paper on the abuse of science in the policy arena by conservative factions. Shawn follows the ideology and the money and the crazy, but he does something else as well. In Fool Me Twice: Fighting the Assault on Science in America, Shawn Otto develops a model of the social and cultural structure of science vis-a-vis the place of science in society and policy. It isn't a simple model. Shawn does not do what so many others have done. He does NOT do JUST-is to the problem, as in:

I grew tired years ago of the simplistic answer that satisfies the self and leaves one thinking one's done what one can and should do. I was recently at an event that brought together a dangerous mix; Senior faculty and brand new graduate students, in the woods, at night, with an unlimited supply of wine. And at some point the conversation went to that Place of Just, and everyone had to chime in with their own simple solution to making students "get" evolution or "get" climate change or "get" whatever-whatever. And each claim that "You just have to...." was reasonable, valid, would probably work to some degree, and on it's own utterly inadequate. And, despite the wonderful qualities of papers and books written over the last five years on this topic, most of those more considered works don't do a lot more than the wine-emboldened declarations of "what you just have to do is ..." by various neophyte teaching assistants and grizzled old professors.

Shawn's book does, though. He does not provide a solution or a quick trip or a way to feel like you've done enough. He does lay out plans and he speaks of specific things that have to happen, and he focuses, as you might expect, on the political process. Shawn is the co-founder and CEO of Science Debate 2008, which was an attempt not without its successes, to bring science into the US Presidential campaign process during the last election. If we want things to change and good things to happen, we need to develop effective campaigns that have objectives other than raising awareness or preaching more eloquently to the choir. There are four horses to which we are inextricably bound galloping powerfully towards a cliff and we have no control over them because conservative political elements have pretty much won all the battles for the reins of power. We have only a little time to grab all those reins and grasp the halters or whatever else we can get our hands on and pull those horses into a new trajectory. Looking at each other and saying how great we are is not helpful, making the case that the riders should turn their mounts will fall on deaf ears. Reasoning with the beasts (the free market, political idealism, blind libertarianism, and institutionalized ignorance) has no purpose.

I will be interviewing Shawn next month some time, and I'll have more to say about Fool Me Twice, so stay tuned. Meanwhile, some levity is in order:

Wanted to attend the release last night, but my kidney decided to ovulate a stone yesterday morning. I thought about coming groaning in pain and still hopped up on painkillers, but I thought that might be distracting. Will get my hands on this book as soon as the next grant goes out.

The book is also available on the Nook, for those not in thrall to Amazon.

Thanks for the tip about the Nook, RBH. I would have downloaded it but I wasn't sure how to get Shawn to autograph that.

I was trying to follow Shelby's advice and read it slowly, to absorb it; the problem is that it is written so well and it flows so smoothly that before I knew it I was on Chapter 6. I am learning a great deal about the process of the American science milieu and how we have come to be in such danger because of certain events in history that really surprised me.

Yes, this is a must read for everyone who wants to figure out the best way to fix the future.

I'll read it a second time, slowly after I have raced through it on first reading.

Somebody has to come up with a way to sign e-books.