First close up of DNA ever

When Bill O'Reilly said that you "can't explain tides" I laughed. Why did I laugh? Because if he wasn't such a dumb-ass he could have EASILY named a dozen thing that science claims to "know" that a reasonably good rhetorician could convince the average Tea Bagger that science really can't "know" because it can't really "see" them. The tides have been understood not only by science by by a lot of regular working class potential Republicans (though many are not) who eek out their living on the shores of the briny sea. Bill O'Reilly must have looked like a complete idiot to them. Meanwhile, almost everything we know about the details of what happens inside a cell is either invisible or so close to invisible that it would qualify as "If we can't even see it, how can we now that?" material.

Of course, we DO KNOW that stuff. It just isn't easy to know. I've discussed that at some length here.

But now, one of the interesting inferences that science has made about something very tiny inside (usually) cells has been confirmed by direct observation, back in the early 1950s in a paper by these guys named Watson and Crick, has been confirmed by sight. A research team in Italy has produced a snapshot, a photograph, of the DNA Double Helix. Sort of. 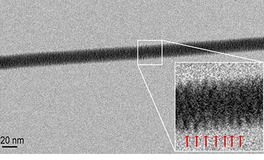 From the paper's Abstract: Direct imaging becomes important when the knowledge at few/single molecule level is requested and where the diffraction does not allow to get structural and functional information. Here we report on the direct imaging of double stranded (ds) λ-DNA in the A conformation, obtained by combining a novel sample preparation method based on super hydrophobic DNA molecules self-aggregation process with transmission electron microscopy (TEM). The experimental breakthrough is the production of robust and highly ordered paired DNA nanofibers that allowed its direct TEM imaging and the double helix structure revealing.

Pretty cool, huh? What you are actually looking at is a set of DNA strands wrapped in a very orderly fashion around a single strand that forms a core for the others. You'd have to squint really hard to see the actual double helix, but it is in there somewhere.

In order to get this picture, a strand of DNA was stretched between two pillars of nanoscopic cilicone. The surface that included the nano-pillars was designed to be hydrophobic, which caused the DNA to be left stranded (ha ha) at the super microscopic level so instead of getting all bunched up a single strand could be located. The photograph is sort of an electron microscopic image, but with technology made just for this setup. This technique is a whole new way of visualizing tiny stuff. Keep an eye on the nano silica pillar technique.

There is an article here in the New Scientist as well.

...at present, the method only works with "cords" of DNA made up of six molecules wrapped around an seventh acting as a core. That's because the electron energies are high enough to break up a single DNA molecule.

Using more sensitive detectors that can respond to lower-energy electrons should soon allow the team to see individual double helices, and even unwound single strands of DNA. "With improved sample preparation and better imaging resolution, we could directly observe DNA at the level of single bases," says di Fabrizio.

And, BTW, Bill-O's only salient talent seems to be looking like an idiot. Kudos, though--he's very good at that.

What these people will never get, it's that we got there because we assumed it was possible. That is, based on our assumptions, even if we did not see them directly (yet).

If scientists were doing science their way, we would basically stop any progress, since we wouldn't try to see things we don't already see... And what's the point looking for something we already know to be true?

I wish I could get my head around — or, perhaps, just accommodate myself — the intuition that scientifically naive people have about what it means to know something. On the one hand, it often is extremely simplistic, based upon directly "seeing and touching" something. On the other hand, almost everything that we think we know, even when it involves something having been seen and touched, has been seen and touched by people that aren't ourselves. So even the direct sensing is only hearsay, and yet almost none of this do people question.

So there must be some more subtle heuristic involved. Some sort of synthesis between personal experience and social consensus. Which is what you'd expect — but there does seem to be a lack of integration with regard to scientific knowledge. As was discussed at length recently with regard to the Congressman and geology, the vast interconnections between science and technology imply that contesting something like the age of the Earth also is contesting huge swaths of things that people like that Congressman already think they know and don't find suspect. This is partly a failure of science education, but also partly a failure of general education — the interconnectedness of knowledge and how that intersects skepticism is something that is generally assumed to form the foundation of a liberal education. Yes, far fewer people receive or internalize this educational core than we'd wish, but I fear that the shortfall is getting worse and the gap between what's thought to be known and a trained intuition about what it means to know something is increasing.