The Ebb and Flow of Lunar Science

The picture above is what the Moon would look like if you wore gravity glasses.

We've been following the Grail Mission for some time now, and new results are in. NASA has made a very detailed gravity map of the moon. The Grail mission involves the use of two space craft flying next to each other, keeping track of their relative position by the use of radio signals. As they pass over the moon's surface, they also interact with the Moon's gravity. The complex dynamic of interaction between the twin spacecraft and the moon is measured by highly sophisticated and sensitive equipment, the data are crunched, and a gravity map is made.

The new map shows tectonic structures and landforms not previously seen in detail. Of particular interest:

"We used gradients of the gravity field in order to highlight smaller and narrower structures than could be seen in previous datasets," said Jeff Andrews-Hanna, a GRAIL guest scientist with the Colorado School of Mines in Golden. "This data revealed a population of long, linear gravity anomalies, with lengths of hundreds of kilometers, crisscrossing the surface. These linear gravity anomalies indicate the presence of dikes, or long, thin, vertical bodies of solidified magma in the subsurface. The dikes are among the oldest features on the moon, and understanding them will tell us about its early history."

Here's the gravity map in motion: 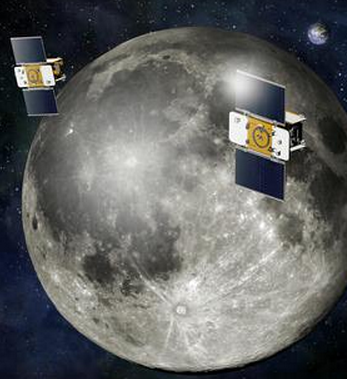 The twin spacecraft were initially named "A" and "B" in order to keep them straight, but later on a naming contest was held and they were renamed "Ebb" and "Flow." The mission had completed a full map of the Moon's gravity about mid year, and then the spacecraft changed position at the end of August to create a higher resolution map.

Details from the NASA press release are here.

A handful of peer reviewed papers on GRAIL were published in Science moments ago. Here are the abstracts:

The Crust of the Moon as Seen by GRAIL, by Wieczorek et. al.

High-resolution gravity data obtained from the dual Gravity Recovery and Interior Laboratory (GRAIL) spacecraft show that the bulk density of the Moon’s highlands crust is 2550 kg m−3, substantially lower than generally assumed. When combined with remote sensing and sample data, this density implies an average crustal porosity of 12% to depths of at least a few kilometers. Lateral variations in crustal porosity correlate with the largest impact basins, whereas lateral variations in crustal density correlate with crustal composition. The low bulk crustal density allows construction of a global crustal thickness model that satisfies the Apollo seismic constraints, and with an average crustal thickness between 34 and 43 km, the bulk refractory element composition of the Moon is not required to be enriched with respect to that of Earth.

Gravity Field of the Moon from the Gravity Recovery and Interior Laboratory (GRAIL) Mission, by Zuber et al.

Spacecraft-to-spacecraft tracking observations from the Gravity Recovery and Interior Laboratory (GRAIL) have been used to construct a gravitational field of the Moon to spherical harmonic degree and order 420. The GRAIL field reveals features not previously resolved, including tectonic structures, volcanic landforms, basin rings, crater central peaks, and numerous simple craters. From degrees 80 through 300, over 98% of the gravitational signature is associated with topography, a result that reflects the preservation of crater relief in highly fractured crust. The remaining 2% represents fine details of subsurface structure not previously resolved. GRAIL elucidates the role of impact bombardment in homogenizing the distribution of shallow density anomalies on terrestrial planetary bodies.

The earliest history of the Moon is poorly preserved in the surface geologic record because of the high flux of impactors, but aspects of that history may be preserved in subsurface structures. Application of gravity gradiometry to observations by the Gravity Recovery and Interior Laboratory (GRAIL) mission results in the identification of a population of linear gravity anomalies with lengths of hundreds of kilometers. Inversion of the gravity anomalies indicates elongated positive density anomalies interpreted to be ancient vertical tabular intrusions or dikes, formed by magmatism in combination with extension of the lithosphere. Crosscutting relationships support a pre-Nectarian to Nectarian age, preceding the end of the heavy bombardment of the Moon. The distribution, orientation, and dimensions of the intrusions indicate a globally isotropic extensional stress state arising from an increase in the Moon’s radius by 0.6 to 4.9 km early in lunar history, consistent with predictions of thermal models.

Oh, that looks exactly like a jaw-breaker we used to love.

Here are some safe reactor designs that could be used during the 14-day lunar night (some nuclear power source absolutely necessary for serious in situ manned lunar exploration)
"Nuclear energy: Radical reactors" http://www.nature.com/news/nuclear-energy-radical-reactors-1.11957