I've got kids ranging from zero to 12 years of age to find gifts for this season. I've got most of them covered, and science books have figured in this effort in a bigger way than usual this year. I'm impressed with the number of climate change choices that have become available. Know a Republican with offspring? Ha. You know what to do... 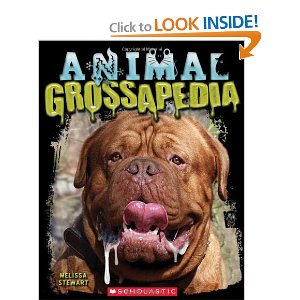 But first some other sciencey books that are highly recommended or

... from the publisher: "Think all animals are cute and cuddly? Read this book to discover just how disgusting they can really be!

There are plenty of books out there that focus on "gross" substances in the human body, but many animals use these same substances in ways that will surprise and fascinate kids! Did you know that Komodo dragons use their saliva to poison their prey, but mice use their saliva to heal their wounds? Could you guess that vomit is used by the sea cucumber to startle enemies and also by bees to make honey? Young readers will walk away grossed out and with an understanding of how different animals use spit, vomit, slime, poop, urine, and blood to survive."

is one of several "Zoo Born" books that emerge from the Zoo Born Website world. I would appear that all animals are cute when first born. Or may there is selection bias, I don't know. Anyway, these first two books in combination should cancel each other out very nicely.

No true collection of science books for kids would not include one about squid. Giant Squid: Searching for a Sea Monster

by Mary Cerullo fits the bill. "...This sea monster is real. It lurks in the freezing black depths of underwater canyons. Nearly 50 feet long, it hunts with its long arms and tentacles. Its powerful suckers leave giant round scars on those that live through a battle with it. But this enormous beast, with its huge, strange eyes, remains hidden from humans. We rarely see it and know little of its ways. What is this monster? The giant squid. This famed member of the cephalopod group has a history of frightening fishermen, starring in fictional adventure tales, and keeping scientists guessing. What is the story of this mythic creature? Why is it so hard to study? What secrets does it keep? Clyde Roper, ocean scientist and squid expert, has been seeking this secretive creature for decades. Come along as he and other researchers unravel its mysteries in Giant Squid: Searching for a Sea Monster."

by Steve Jenkins is for little kids and is spectacular looking and has multible levels of info to keep both the little ones and adults informed, and to track your genius child's mind as she grows in to a etymologist. Recommended for ages 4 and up, but I think it can work nice as a night-night book for 3 year olds.

Every kid need an alphabet book and D is for Desert: A World Deserts Alphabet

is a good one, covering desert habitats around the world.

When Julia was little, she single handedly discovered an oil spill, alerted authorities, and ultimately caused the salvage of a long-sunk ship that had shifted on the ocean bottom in such a way that it resumed leaking it's fuel. If you want your daughter to do this too, consider Saving Animals from Oil Spills

All little kids eventually make this series of discovery: 1) Pockets exist. 2) Rocks exist. 3) Pockets are where you put rocks 4) Maybe daddy should have bought that service contract on the washing machine after all. If You Find a Rock

is not going to help with this situation, but it may help the child learn along the way.

. So there, I mentioned it. 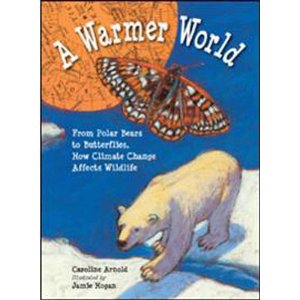 by Caroline Arnold... Booklist says: "...With clear explanations and bright, handsome collage artwork, this picture book packs in a lot about the effects of global warming on particular animals and the connections between them. Even small changes in temperature can produce big changes in animals' chances for survival, and up to one million species could be threatened with extinction as the planet heats up. As global temperatures rise, the warmer water is destroying coral reefs and many coral species are becoming extinct, while creatures in higher zones have nowhere to go to find cooler places. Many yellow bellied marmots, for example, have starved because they hibernate less in a warmer climate and cannot find the plants they normally eat. At the same time, some creatures do benefit because they can move to habitats that were previously too cold. The visual details bring the concepts close, from images of a butterfly in flight or the final view of an arctic fox with a factory belching black smoke in the background. A glossary and suggested resources conclude."

by Sandra Markle is the true story, apparently, of a Polar Bear cub who is separated from its mother in a warming world. Help your child not grow up into a Climate Change Denialist before it is too late!

I have finally gotten around to creating a list of deep-sea themed books, with some others thrown in at Amazon. Some of you will recognize a handful of the titles that have been reviewed here. Others will be new. As I find new books, and feel free to recommend some, I will post here noting I…

The foreshadowing last week was accurate. This week, we offer a review of Tentacles! Tales of the Giant Squid by Shirley Raye Redmond with illustrations by Bryn Barnard. Younger offspring: We should talk about my new squid book for the Friday Sprog Blog. Dr. Free-Ride: OK. What do you like…

A Fish That Starts With "X": Children's books about the Sea

My understanding of what makes a good children's book changed dramatically about 15 months ago, when my baby daughter Clara Lynn was born. Before that time, I thought a good children's library would be a mix of Dr. Seuss, Dick and Jane, Sesame Street, and Winnie the Pooh. These were the stories I…

The New Zoo Borns Is Out!

Just in time for Christmas. The problem with cute baby animals born in the zoo is that they grow up. The upside of this process is that you need a NEW Zoo Born every so often, and the new one is out. ZooBorns The Next Generation: Newer, Cuter, More Exotic Animals from the World's Zoos and…

I can't find an email address for you, so I am leaving this note here.

Given that your wife is a science teacher, you may be especially interested in our nonprofit website, http://ClassWish.org, which provides science equipment and other resources for teachers. I'd love to send info and seek your guidance if you would please send me your email address.