Anthropogenic global warming is a long term phenomenon that is caused by the release of Carbon, in the form of Carbon Dioxide, from fossil deposits, though burning of fuels such as oil, natural gas, and coal. There are other human causes as well, but some of those relate to the use of fossil fuels (such as the leakage of methane gas from oil extraction operations, or from delivery pipelines).

The evidence for warming comes from a variety of sources, but mainly from land based thermometer stations from about the mid 19th century and later, higher tech measurements such as satellites.

The following graph is provided by the National Climatic Data Center and comes with its own caption attached, providing the original source: 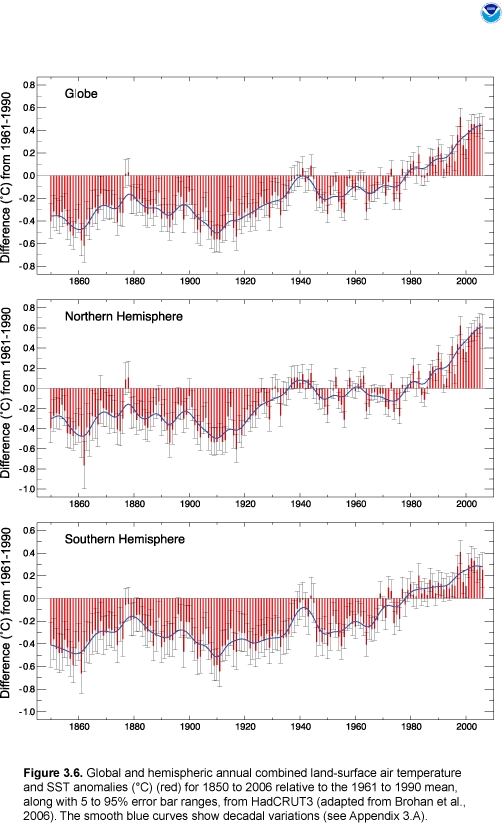 Change in global temperatures since 1850

Another blow to the natural gas alternative

A letter in Climatic Change looking at the life-cycle greenhouse warming potential of natural gas raised a lot of hackles a little while back. If, as the authors posit, replacing coal and oil combustion with gas-fired turbines could actually accelerate global warming rather than slow it down, then…

You may have heard that the release of greenhouse gases has recently gone down, to match levels of several years ago. Why, then, do we have someone saying that greenhouse gasses have reached a new record high? There are two, maybe three, reasons. First, even though CO2 release from the US may be…

This is the third in a series of reposts from gregladen.com on global warming. Why It Matters What you Burn and When you Burn It Carbon Dioxide is a deadly poison. It is about 50% heavier than air, so where it occurs in density, in mines or certain natural vents associated with volcanics, it can…

This is the third in a series of reposts from gregladen.com on global warming. Why It Matters What you Burn and When you Burn It Carbon Dioxide is a deadly poison. It is about 50% heavier than air, so where it occurs in density, in mines or certain natural vents associated with volcanics, it can…

The number is an estimate of how much warmer the planet is based on both measurements of the air at the surface of the land and the sea surface temperature.

One graph is for the whole planet, the other two are for the northern and southern hemisphere separately.

These charts show the definitive impact of industrialization since 1850. There is no doubt that man has sped up the global warming process, but how fast and was it going to happen anyway?