"Belief" in Climate Change, The Weather, and Political Party

It seems that people "believe" in climate change (really, global warming in particular) when it it hot out more than at other times. And by "people" I mean the population in general. It turns out that Democrats don't change their position on climate change as the temperature outside changes (they already know it is real) and Republicans do a little (because it is true and a small number of them will put reality before politics). Meanwhile, those darn Independent voters who have somehow taken over our democracy for some very poor reasons (IMHO) wildly change their beliefs literally on the basis of the ambient temperature. Talk about sticking your finger in the air and seeing which way the wind blows before making an important decision! 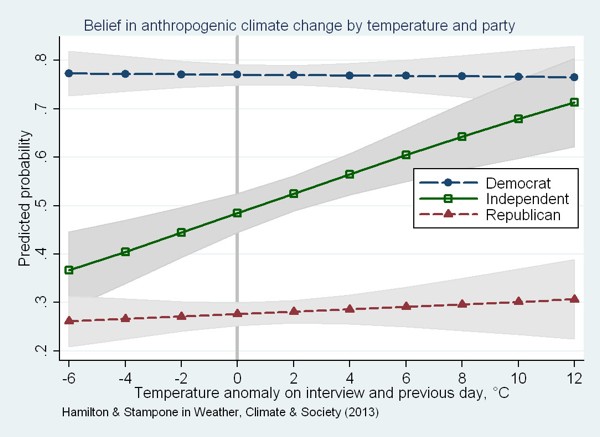 This is based on research done at the University of New Hampshire, summarized in this press report:

DURHAM, N.H. – There’s a well-known saying in New England that if you don’t like the weather here, wait a minute. When it comes to independent voters, those weather changes can just as quickly shift beliefs about climate change.

New research from the University of New Hampshire finds that the climate change beliefs of independent voters are dramatically swayed by short-term weather conditions. The research was conducted by Lawrence Hamilton, professor of sociology and senior fellow at the Carsey Institute, and Mary Stampone, assistant professor of geography and the New Hampshire state climatologist. The research is presented in the article “Blowin’ in the Wind: Short-Term Weather and Belief in Anthropogenic Climate Change” in the American Meteorological Society journal Weather, Climate, and Society.

“We find that over 10 surveys, Republicans and Democrats remain far apart and firm in their beliefs about climate change. Independents fall in between these extremes, but their beliefs appear weakly held — literally blowing in the wind. Interviewed on unseasonably warm days, independents tend to agree with the scientific consensus on human-caused climate change. On unseasonably cool days, they tend not to,” Hamilton and Stampone say.

Hamilton and Stampone used statewide data from about 5,000 random-sample telephone interviews conducted on 99 days over two and a half years (2010 to 2012) by the Granite State Poll. They combined the survey data with temperature and precipitation indicators derived from New Hampshire’s U.S. Historical Climatology Network (USHCN) station records. Survey respondents were asked whether they thought climate change is happening now, caused mainly by human activities. Alternatively, respondents could state that climate change is not happening, or that it is happening but mainly for natural reasons.

Unseasonably warm or cool temperatures on the interview day and previous day seemed to shift the odds of respondents believing that humans are changing the climate. However, when researchers broke these responses down by political affiliation (Democrat, Republican or independent), they found that temperature had a substantial effect on climate change views mainly among independent voters.

New Hampshire’s self-identified independents generally resemble their counterparts on a nationwide survey that asked the same questions, according to the researchers. Independents comprise 18 percent of the New Hampshire estimation sample, compared with 17 percent nationally. They are similar with respect to education, but slightly older, and more balanced with respect to gender.

In conducting their analysis, the researchers took into account other factors such as education, age, and sex. They also made adjustments for the seasons, and for random variation between surveys that might be caused by nontemperature events.

There’s a well-known saying in well over half the country that if you don’t like the weather here, wait a minute. They all think they're being unique and clever when they say that. The parochial idiots.

I know. I first heard that in Boston when I moved there in ca 1980. Boston is under the influence of continental and marine weather patterns, but is also west of a broad series of low lying mountains, often near a jet stream (in winter) and the Atlantic at this point takes a hard right (creating the famous "down east" effect) which is "perfect" for confusing the sea storms in that area. Which, essentially, makes the saying very true there, and more true than most places I've been in the US.

It is really funny when you hear someone say it in LA or Sand Diego. There, the saying should be "If you don't like the weather, drive a few minutes to another microclime. It will be different. Not much different, but different"

I've seen the quote about waiting a minute if you don't like the weather in New England attributed to Mark Twain, although I'm not sure if it's really his.

I've heard a few people express disbelief about global warming when the weather was cold. I wonder if they were independents.

Mt. Washington in New Hampshire is known to have the worst weather in the lower 48 states. At only 6288 ft. it sits at the confluence of three storm tracks. The highest recorded surface winds (231 mph) were recorded their. Many people have died of hypothermia on its slopes and not all of them have been in the colder months. Take a quick look ( http://www.mountwashington.org/about/visitor/surviving.php) at some interesting facts about it.

I never climbed that mountain, but as a 46er (almost) I've always resented Washington because it has a weather station and thus sets all these records that I'm sure are broken all the time in the ADKs!