The Rest of the Democratic Primary

We are in the Primary Doldrums. For the last several days and the next several days, there is not too much happening, big gaps between the action. Wisconsin is important, and it is Tuesday, Then Wyoming by itself, then New York by itself, then a sort of Super Tuesday with several states.

As you know I've created a multivariable model that has a good record of predicting primary and caucus outcomes in the contests between Hillary Clinton and Bernie Sanders. For the rest of the primary season, this is what it looks like. 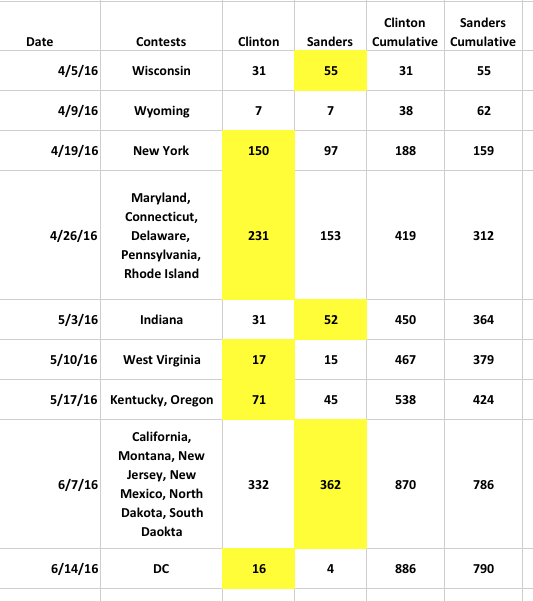 I used yellow highlighting to indicate who is expected to win the most delegates on each primary/caucus day. Sanders will do well in Wisconsin, tie (or maybe even better) in Wyoming, do well in Indiana, and on balance, do well on June 7th when there will be six contests at once including Pennsylvania. But while Sanders may win the day on three (or four) days, Clinton will win the day on five. In total, Clinton is predicted to take 886 delegates, and Sanders 790.

This is the distribution of cumulative delegates starting with now and moving across this range of primary dates, showing the evolution of the difference between the two candidates throughout.

On balance, Clinton will, according to this model, will widen her lead over Sanders. If Sanders does better than projected this gap will narrow, but he'll have to do very well to close the gap.

Time to remember how money corrupts -- in particular by financing the most extreme people out at all of the edges to draw strength away from the center where compromise can happen.

Time for any group to think hard about where the money coming to them really originates and whether they're being funded not to support their ideas but to disrupt the chances of anything workable happening.

It's an old tactic. It's what the tobacco companies did when fires from smouldering cigarettes became a public issue -- they funded a fire marshals organization to campaign for fireproof chemicals to be added to everything _except_ cigarettes. And they funded the chemical companies that could turn their waste products into stuff salable as additives for fireproofing. So we got: toxics in everything, and cigarettes that continued to smoulder.

You wouldn't believe this shit if it wasn't for good reporting:
http://media.apps.chicagotribune.com/flames/index.html

Well, now, think about other areas of political action where it's easy to fund groups to fight with each other -- fund the fringes, fund the most self-confident and most combatitive and least cooperative people. Tear the issue apart.

Just a few people -- wholly sincere, entirely deeply convinced they're right and everyone else is wrong -- can disrupt any group effort.

Where's their money coming from?
I hope they're wondering -- asking themselves whether they're being used.

Wisconsin may be a bit of a wildcard; little is known about how the GOP passed voting restrictions are going to impact the primary, but as many as 300,000 WI voters are at risk of being disenfranchised - overwhelmingly Dem. voters. Of course not all of them would vote in the primary anyways, but that's a significant fraction of all Wisconsin eligible voters (7%).

"We can only win by cheating, but fortunately, we're good at it!"

It will be interesting to see if the recent Quinnipiac poll is a sign that Sanders is closing the gap - or just a statistical blip. It's more recent and does have a larger sample size than the other two combined.

Kevin, it depends on whether or not the disenfranchised voters are a random or a biased sample of the voters wrt Sanders vs. Clinton.

Hank, if we do enough down ballot, and up ballot, work, there is a high chance of a blue Senate and a blue House is within the range of possibilities.

One would hope that for the general election, there would be swarms of young people, financed by many small contributions, seeing to it that voters get to vote.

Probably the most important use of such resources ever, given how hard the Republicans are working to suppress D voters.

I hope you are wrong.

In most elections there are many thousands of ballots cast in New Mexico that are not counted. It makes me wonder why elections are even bothered with.