Today and tomorrow we have the Alaska, Hawaii, and Washington Democratic primaries.

According to the model I developed prior to the last primary, which predicts future primaries using information about primaries to date (which I've not updated from last Tuesday), Sanders will win all three primaries. That model suggests that the delegate spread by the end of the day will look like this:

However, I also developed an alternate model which assumes that Sanders' over performance (in relation to the afore mentioned model) requires an adjustment. That alternative model suggests that this will be the delegate spread:

If the first of these two outcomes is realized, then the likely course of the rest of this primary season will look more like this:

But if the second of these two outcomes is realized, then the likely course of the rest of this primary season will look more like this:

Or not. The key difference between these two futures is, of course, in the first one, Clinton secures the nomination, and in the second one, it is too close to call with Sanders having a distinct possibility of winning.

Well, the Easter Bunny, who I believe is a friend of that bird that visited Senator Sanders the other day, left Bernie a nice basket last night.

As noted above, Sanders was expected to win all three caucuses that were held yesterday, and he did, so that alone would be no real news this morning.

However, in the framework of two alternative models, one giving Clinton the nomination, the other having the two Democratic candidates coming out in a virtual tie, a larger than expected win would be associated with the latter.

And that is what happened. The following compares the expected delegate distributions for the standard model and the Bernie II model (as discussed above and in previously provided links) with the actual outcome (though I estimate the delegate counts, that could be off by one for any of the states). 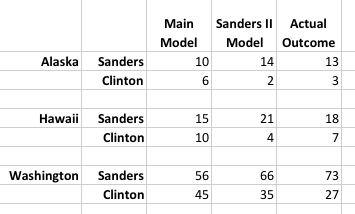 These are small states, caucus (and thus quirky) states, and there are only three of them, so one must be cautious in drawing conclusions. We can combine the three states to get what might be a more robust indicator of which of the two models is working out best. Like this:

I won't produce new graphs for the revised outcome because the model was so close to reality that it hardly changes it. I'll do so when more delegates are counted.

So, the bottom line is this. For several contests now we have seen Sanders do something to indicate he is pulling ahead, but then, in the next round, he failed to do so and Clinton continued on a clear path to the nomination as per the main model. The contests on the 22nd, once gain, indicated a shift in voter behavior in favor of Sanders. This weekend's caucuses were a test of that hypothesis.

Instead of the shift being falsified, it was supported by this weekend's voting. This gives credence to the idea that Sanders could catch up to Clinton. However, this is a small number of small states. So it may not mean much.

We now have an entire calendar week with no contests. This allows for a more flexible campaign strategy for both candidates. Then, on the 5th, a week from Tuesday, we have Wisconsin all by itself with 86 committed delegates, where Sanders is expected to do well. Immediately following, on the 9th, is Wyoming with only 14 candidates. Again, Sanders is expected to do well.

Wisconsin will be an important test for Sanders because my models says he'll do well, but it is a primary, not a caucus.

The following Tuesday, the 19th, is the New York primary. Here, according to my main model, Sanders and Clinton are neck and neck. The polls put Clinton way ahead there. So New York will be an interesting test of my model. I do have Clinton winning, but not by much, and the Sanders II model has them even closer.

If the polls are right, and Clinton trounces Sanders in New York, then my main model, which has Clinton winning the nomination, is conservative on the Clinton side, and the contest may be over. If the two candidates are pretty even there, or Sanders wins by a few delegates, then we will continue to bite our nails. If Sanders swamps Clinton, then that bird was right.

I generally stay away from the D side of things at PredictIt, but I'll be putting a little on Bernie, as my much less sophisticated model agrees with your first scenario.

With the final totals not yet in, the results should be close to this:

Which gives Sanders one more delegate total (102) than your alternate model (101).

In New York your model may be confounded by the fact it's a Clinton home state; one she represented as US Senator. That may give Bernie some psychological comfort, but won't help his delegate math.

Maybe because it's Easter Sunday, the posted results for Washington differ greatly from yours. (Or I'm not using the right sources.)

Both RealClearPolitics and the New York Times put the delegate counts at Sanders 25, Clinton 9.

As I have mentioned in a couple of previous comments, I have been tracking the democratic nomination race using a kind of "pure" ethnic model; I take normalized percentages of White, Black and Hispanic demographics for each state, fit the races so far to a linear model, and use it to see how well such a model can predict future races. Up through Ohio, it seemed to be doing reasonable well.

But as the races moved westward into the area of the country Colin Woodward calls "the far west", the model has begun to fail. Adding the six states since Ohio (Arizona, Utah, Idaho), Washington, Alaska, and Hawaii) to the twenty-six previous races) increases the rms average error for the known states from about 7.3 percentage points to about 9.2 percentage points, with all six of the more recent states having errors greater than 10 percentage points.

This probably shouldn't be much a surprise, since this western part of the country is as culturally distinct from the rest of the country as is the South, although for some reason this fact is less commonly recognized.

With a couple of exceptions (such as AZ and CO) this sorts out most of the south into one group and the west into another group. It is the local culture, not ethnicity, that determines the tendencies of how people vote; ethnicity works to the degree that it correlates with culture. Once one moves out of the south, this correlation breaks down, so the model starts to fail.

Christopher, this is because of the way delegates are determined. The state has 101 delegates, which will ultimately be determined proportionately, so my number is close to correct or off by a few. But the process in some states is long and involved and the process doesn't necessarily happen right away. Those other outlets are using incomplete information.

RickR - I've been thinking about the relevance of Joel Garreau's Nine Nations of North America scenario to this election. The book is now pretty dated and you could quibble with the boundaries drawn, but the basic idea that our supposedly monolithic imperial homeland is actually a mashup of several entities, with different economies and cultures, seems true to me.

We've already established that Dixie, southern Florida, and what Garreau called "Mexamerica" heavily favor Clinton, while New England and "Ecotopia" (aka the Cascadian Republic) favor Sanders. If we think of these as different "nations", then as you say, it's not surprising that Greg's ethnic models need adjustment as the contests move across the map. We wouldn't assume that white vs. black Englishmen or Frenchmen would vote the same way as Americans of the same races.

Most of the states still to vote are in Garreau's "Foundry, Breadbasket, and Empty Quarter" regions, the large majority of what coastal elites call Flyover. These are industrial or rural regions with many blue-collar folks who have been crushed by globalization, so I might like to assume that they would vote heavily for Sanders. However, the contests in these regions to date have included solid Clinton and Sanders wins as well as a couple of effective ties. It remains to be seen which way, if at all, they will swing; at this point, an even split means a Clinton win.

Garreau's model also predicts that California will not be a blowout, as it is shared between three regions and has large population centers belonging to the "Ecotopian" and "Mexamerican" cultures, which may be expected to vote differently.

If we go by the 'nations' theory (either Garreau's 9 or Woodward' 11) both agree that California has an overlap of three cultural regions: Ecotopia/Left Coast, Empty Quarter/Far West, and Mexamerica/El Norte. The Democrats in the first two seem to be fairly strongly pro-Sanders, while the third is pro-Clinton.

The eastern Empty Quarter/Far West portion is heavily republican, so despite the fact that the Democrats there are strongly pro-Sanders, that may not translate into a lot of Sander's votes, so Californina may come down to mainly the Ecotopia/Left Coast pro-Sanders voters and the Mexamerica/El Norte pro-Clnton voters. The Los Angeles area is, as I read the maps, in the Mexamerica/El Norte area, so by population this would give Clinton the edge.

Jane,
I've also seen the US broken into Industrial, Plantation and Frontier economies - though there is certainly a lot of overlap, and one could argue that Frontier has become an Industrial/Frontier hybrid.
I think NY is Sanders big nut to crack.

Yes, in fact, Garreau considered Los Angeles the "capital" of the region. I find Woodward's categories less appealing, partly because, with some regions bizarrely gerrymander-shaped or split into two far-distant chunks, they can't be more than abstractions used to interpret culture; it is impossible to imagine them serving as a basis for partition.

All polls show Clinton winning NY, so I wouldn't get my hopes up there.