In a series of strange events, President Donald Trump once again invoked violence against a CNN reporter and, apparently, embraced the idea that he is a fascist. 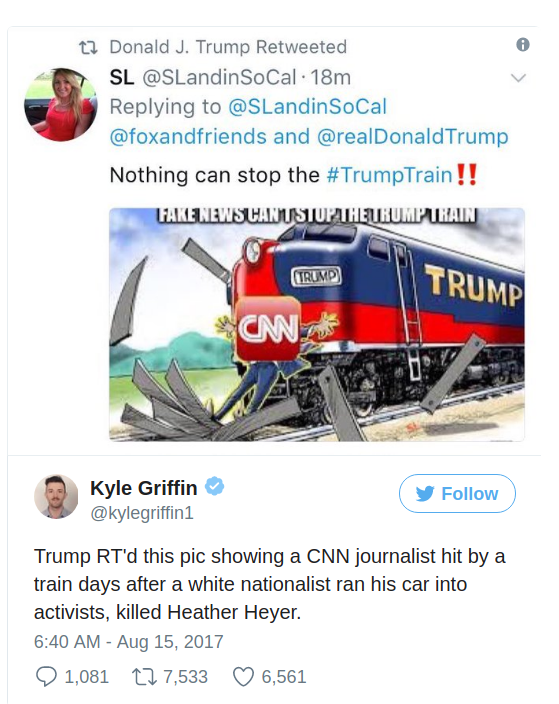 Similar to an earlier contrived production in which Trump himself is shown in a video beating a CNN reporter, this shows a train labeled TRUMP running over a CNN reporter in cartoon form.

That tweet was deleted soon after being posted. I wonder how that happened. Did Trump think better of his choice? Did General Kelly storm the bathroom and wrestle Trump's phone away from him? Did the NSA dive in there and delete the offending tweet in such a way that Trump will never see that it was deleted but the rest of us will? Can they even do that? 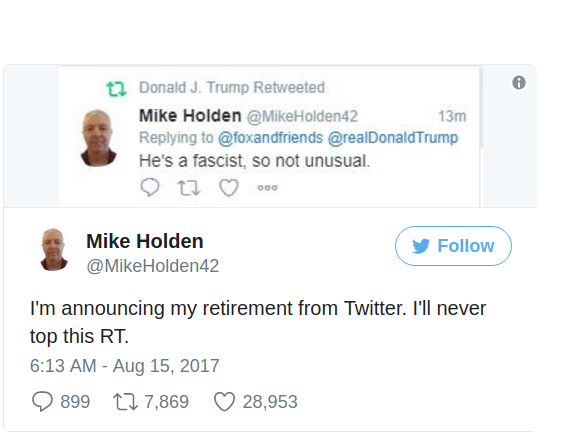 I checked. Trump's twitter account does not say "retweets are not endorsement," and we know from the evidence of considerable prior practice that Trump's retweets are, in deed, endorsements.

That tweet was also removed, and again, one wonders how that happened.

SNL, are you paying attention?

I found out about these tweets in this WaPo article.. So, it is probably fake, but whatever.

How Twitter Starts The Next Big War, Unless You Act To Stop Them

https://twitter.com/realDonaldTrump/status/911789314169823232?ref_src=t… A pair of American B-1 Lancer bombers is flying north northeast along the border of North Korean air space. Accompanying the bombers is a squadron of F-15C Eagle fighter jets. The crews are aware of the fact that North Korea…

Trump has turned the corner

It wasn't much of a corner, he was already pretty much there, but yesterday, Donald J. Trump, pretender to the Presidency of the United States, threw in his lot with the "good people" of the fascist, white-supremacist, KKK-loving movement. There is a lot of commentary out there about this. None of…

I'm 100% certain this is the way Trump's presidency will end

The Crisis We Await The exact way the Trump presidency ends is not clear. Anything could happen. Trump had zero idea of what he was getting into with this president thing, and the stresses must be amazing. Clearly, he is being driven over the edge by relatively minor day to day events. Nothing…

Aaron Sorkin ate some bad sushi and we are all living in his hallucinogenic nightmare.

Its like this. Only with Trump instead of Josh, and it is real life. Yet, less like real life. Trump, remembering something about watergate, tweets: https://twitter.com/realDonaldTrump/status/863007411132649473 and the Washington Post reports: Trump suggests there may be ‘tapes’ of his private…

Meh. "Fake news" reporters need to come back on that accusation. Something like "Well, it's appropriate when reporting on a fake president, Donald".

I think they shold stop calling him president as well. Or "Sir". Just "Trump".

[gasp] Racists are racist! Who knew!

Speaking of trainwrecks -- I watched the President of the United States become unhinged at today's press conference.

It was already impossible for decent people to have any respect for the guy (clue the usual trolls to come and defend him), but this was far beyond any behavior he's shown on screen since the election.

The most telling point of how bad it was was a shot of Kelly standing off stage, arms folded over his chest, head down, eyes closed. If he was astounded by how far off course it went...

Just out -- what a non surprise.

A White House official tells CNN that White House Chief of Staff John Kelly and other top advisers hoped the president would turn a corner today and talk about infrastructure — but concedes they were entirely wrong.

White House official tells CNN that White House Chief of Staff John Kelly and other top advisers hoped the president would turn a corner today and talk about infrastructure — but concedes they were entirely wrong.
“That was all him — this wasn't our plan," the official said.
The President has been fuming in closed-door meetings about what he sees as unfair coverage. It boiled open in full public view today, the official said.

And again, borked the tags. Time to apologize, relax the hands and let them get to a higher functioning level.

Trump turns the presidency of the USA into a true disaster. Within seven months Trump succeeded in making the USA look like a fool in himself. On the scale of leadership a trump score stands internationally for very bad and irresponsible leadership. He is already characterised as such by billions of people worldwide. The USA let him become the alt-right Über Troll and the Fury of the USA, made in America. Hope he finds the lest hazardous momentum of being impeached for the sake of the common good of the multitude.

Trump turns the presidency of the USA into a true disaster. Within seven months Trump succeeded in making the USA looking like a fool. On the scale of leadership Trump stands for very bad and irresponsible leadership. He is already acknowledged as such by billions of people worldwide. The USA let Trump become the alt-right Über Troll and representative und Fury of the USA, made in America. I wouldn't be surprised if he meets a momentum of being impeached for the common good of the multitude. Hope that such a momentum is relatively harmless for others. A Watergate or Monica Lewinski moment would be efficient enough. He smoked his cigar and left the oval office.

Doesn't our only president use the nomme de tweet "realDonaldTrump", not "Donald J. Trump"?