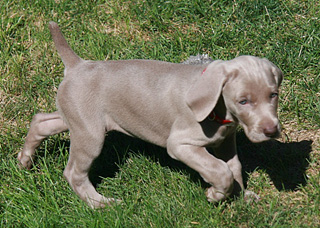 Weimaraner dogs are helping researchers to understand neural tube birth defects, like anencephaly (where the brain or skull do not fully develop) and spina bifida (where the spinal column is not fully enclosed). In new research published this week in PLOS One, Dr. Noa Safra (UC Davis, School of Veterinary Medicine) and colleagues mapped the genomes of Weimaraner dogs that had spinal dysraphism, a neural tube defect, along with samples from humans with spina bifida. They discovered mutations in a gene called NKX2-8 that is known to be involved in embryonic development in the canine samples, but only 6 out of 149 of the human samples. Certainly more studies are needed to determine if mutations in this gene are related to neural tube defects in a portion of human cases.