Would you care for a cricket chip? 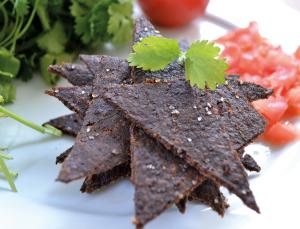 Crickets are the first insect to now be farmed for human consumption in the United States. I'll admit the thought of snacking on cricket flour-based chips is not exactly appetizing. But the process of farming insects over more traditional livestock seems to be less wasteful. Insect farming is a more efficient way of producing dietary protein as it takes much less feed and water to raise insects as compared to cattle. In addition, greenhouse gas emissions from crickets are much lower than with cattle.

Would you try a cricket chip?

Sure, I've eaten a few, why not. I was keeping leopard geckos and ate a couple of the crickets I fed them, out of curiosity I guess. Crunchy, didn't taste like much. Slight hint of nuts maybe but most just bland crunch.

I've read that here are chefs that buy them live, feed them spirolina and fry them up. They are reported to taste a bit of spriolina and whatever oil they are fried in.

Of course, if you want to put people off crickets show video of a horsehair worm emerging from a cricket.

Just a picture and explanation:
https://en.wikipedia.org/wiki/Nematomorpha

No risk for humans but it raises the ick factor sky high for a lot of people. People are sensitive to such presentations. A video of a slaughterhouse, not even one intended to put people off meat, had a friend unable to look a hamburger in the eye for most of a year.

This is an interesting article about Flucker Cricket Farns, with some recipes at the end.

Eat bugs, you know it makes sense..... (think of the size of the farms, for one thing).... The cricket chips look interesting, anyway, even if they don't look particularly appetising....

Since we're not doing so well at curbing our ever-rising population, farming insects sounds like a solution to the problem of how to feed everyone. However, selling the idea will be a major hurdle. I'll stick with my veggies and beans.