A new study from researchers at the University of Sydney shows that golden orb-weaving spiders (Nephila plumipes) that live in the city are larger and produce more offspring as compared to country living.

When they say the spiders are big, they mean really big. The females can reach up to 20-25mm (males are only ~5mm). 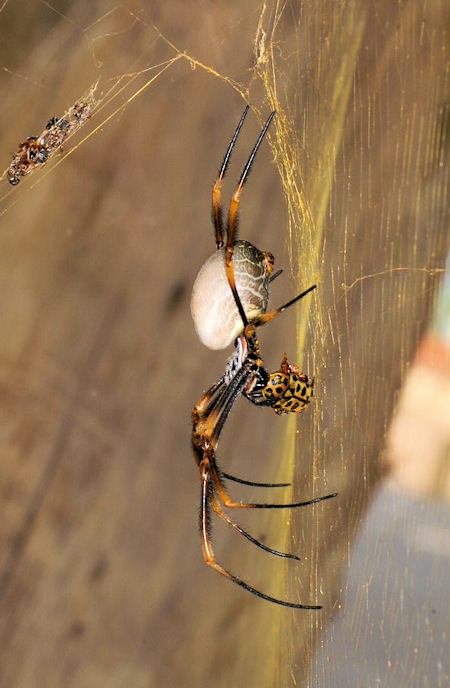 Image from Spiders of Australia
http://ednieuw.home.xs4all.nl/australian/nephila/Nephila.html

The researchers speculate that the urban heat island effect, which is attributed to a lack vegetation and hard surfaces, may lead to the increased body size as invertebrates in warmer climates tend to be larger. Further, they speculate that the abundance of insects attracted to urban lighting (i.e. spider food) also promotes growth and reproductive success.

Last I checked, climate scientists were in agreement that increase in mean global temps would produce localized increases in the sizes of insects and arachnids.

That might actually be useful in scaring some undecideds into thinking about climate change.

Interesting point made pertaining to spider food being attracted to urban light. The artificial night lighting attracts many insects to a certain spot, making it easier for spiders to consume more prey. Discovery posted an intresting article that contains more facts about how Urban areas promote spider growth - (http://news.discovery.com/animals/insects/some-spiders-grow-bigger-in-u…)