Another reason to admire the naked mole rat 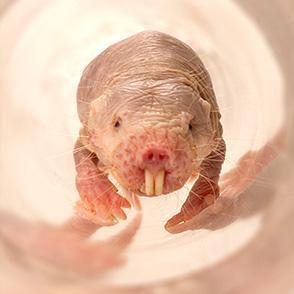 Image of a naked mole rat from www.animals.sandiegozoo.org

The naked mole rat is the longest lived rodent species (>31 years). Unlike most mammals, they seem resistant to many age-associated ailments until much later in life, making them an exciting model of healthy aging. They are also resistant to the development of cancer as mentioned in this prior post.

According to the CDC, cardiovascular disease is currently the leading cause of death in the United States, claiming the lives of roughly 600,000 people annually (or 1 out of every 4 deaths). In a new study published in the American Journal of Physiology - Heart and Circulatory Physiology, Dr. Rochelle Buffenstein's research team (The University of Texas, San Antonio) examined whether naked mole rats showed signs of preserved cardiovascular function and structure of the heart with aging. To do this, they examined common functional and structural signs of cardiovascular aging in animals between 2-24 years of age. What they found using echocardiography was that the function of the left ventricle of the heart under resting or simulated exercise-induced stress were not affected by aging, meaning their hearts continued to function well with age. They also found no signs of cardiac hypertrophy (i.e. growth) or changes in blood pressure with age. Not surprisingly, the aged animals also had no signs of arterial stiffness.

These findings show that naked mole rats are able to protect cardiovascular structure and function until about the last 25% of their life span. In contrast, most other mammals typically begin to display signs of cardiovascular aging much earlier. The researchers are hoping additional studies will lead to the identification of novel targets that might slow or prevent the decline in cardiovascular function with aging in humans.