Blast From the Past: Letter to and From Luis Alvarez

I have mentioned before that when I was a kid, I wrote a letter to Luis Alvarez, the 1968 Nobel laureate in Physics, asking some questions about his theory that an asteroid impact killed the dinosaurs, which had been featured in a NOVA special. I got a very nice letter back from him, very graciously correcting the dumber questions I asked. This made a very favorable impression, which in turn played a role in getting me to include him in the work-in-progress.

Since I was thinking about Alvarez for the book, I asked my parents if they still had a copy of the letter, which for many years I had in a drawer of my desk. Not only did they have the letter, they also had a rough draft of my letter (I remember writing it out, showing it to my parents, then writing a final copy on better paper). The two letters are shown in the "featured image" at the top of this post, and I'll repeat it below for those reading via RSS. I've smudged out the addresses, not that you could really make them out at this scale, but might as well be cautious.

In the interests of some sort of history, I'll transcribe both letters below. The accuracy of this is limited by my terrible fourth-grade handwriting and my terrible forty-one-year-old typing.

My name is Chad Orzel. I'm in fourth grade. I'm interested in your theory about how the dinosaurs died. I also have some questions on it as told in International Wildlife.

when the asteroid struck, it raised a cloud stopping photosynthesis and production of oxygen. How did the mammals survive? How did we get the oxygen back? The dinosaurs would eat all the plants and use the remaining oxygen.

One way to see if the irridium clay was in the atmosphere is: test the bones for irridium.

This is, as I said, a rough draft of the letter, and I know I changed a bunch of it before the final version, particularly that last sentence, which is kind of cringe-inducing. Also, his reply refers to some things that aren't in the letter, as you'll see below. On the back of the letter, my mother has written the word "mechanism" in the margin, presumably because I needed to know how to spell it for the final version, as it doesn't appear in the transcribed text above.

Thank you for your very thoughtful and interesting letter. I am glad you had an opportunity to read of our work in International Wildlife and to see the program in which my son and I and our friends appeared, in Nova.

You ask a very interesting question about the oxygen, and so far as I know nobody else has raised that question. But the answer is simply that there is so much oxygen in the atmosphere that even if the plants stopped making it for a thousand years, there would still be plenty for the animals to breathe. But even if the animals could have used it up in ten years, the plants would have recovered soon enough after the asteroid hit, so that they could start making the oxygen again, and refilling the atmosphere.

Your question about the bones of the last dinosaurs is a good one, but unfortunately so few dinosaur skeletons have been found that there would simply be no way of finding the ones from the last five years out of a period of more than one hundred million years in which the dinosaurs lasted. If you do just a little arithmetic, you will see that if the dinosaurs lasted one hundred million years, and the dust cloud took ten years to wipe them out, then you would have to see ten million dinosaurs before you had a 50-50 chance of seeing one that happened to be living in that last ten year period. So there is no way that we will ever be able to find the dinosaurs that died in that period of time when the clay was coming down out of the stratosphere.

I can't keep up with the paleontologists, because as you point out, Leo Hickey says that the plant record shows that there was a cooling of the climate at the time the dinosaurs disappeared, and Professor Emialini says that he believes that animals were killed because the temperature went up too much. My inclination is to go along with the Emiliani proposal, but I am troubles by the fact that the paleontologists can't agree among themselves as to whether the temperature went up or down, 65 million years ago.

Thank you very much for your very good questions, and I hope that I have answered them satisfactorily. I am enclosing a copy of the reprint of our article in Science magazine, last Summer, and I think it may help to answer some more of your questions.

Some miscellaneous items about these:

-- I was still just about four months shy of my tenth birthday when I wrote that. Damn, I was a presumptuous little dude.

-- While I remember the tv show, I have no recollection of the article in International Wildlife. I could probably dig up a copy, which might bring back memories, but off the top of my head, I don't remember it at all.

-- The line "period of more than one hundred million years in which the dinosaurs lasted" is typed over white-out, so either somebody mis-typed something, or he had to double-check a number. Either of those is weirdly reassuring.

-- The back-of-the-envelope estimate of the likelihood of finding a dinosaur fossil in the K-T boundary clay is a very physicist-y thing to include. I suspect there are more than a few problems with that specific figure, but it's a nice touch.

-- The comment about disagreement between paleontologists is also very physicist-y. Dude, they're arguing about events 65,000,000 years ago-- it's amazing that they can even guess at what the temperature was, let along estimate whether it was going up or down...

-- The Science reprint was this 1980 article, which I remember vividly. It's also reprinted in a collection of his articles that I was reading for book research, and when I saw it I immediately recognized the graphs. It's not in the envelope any more, though.

So, there you go. My primary reaction to this is bogglement at both the fact that I was persistent enough to write this and that he wrote back so nicely. I remember the writing being a huge deal-- going to the library to get an address for him from "Who's Who," writing multiple drafts of the letter-- and I was absolutely over the moon when I got a reply. Honestly, I feel like a bit of a heel now, because I'm not half this good about answering my own mail...

(The less cheery post-script of the story is that, emboldened by this success, I wrote another letter to a famous scientist I'd seen on tv, Carl Sagan. That one had a bunch of questions about black holes in it, and the response was... a form letter from his secretary. Which was kind of dispiriting, really. I didn't have any further correspondence with famous scientists until I started grad school, when I worked for one.) 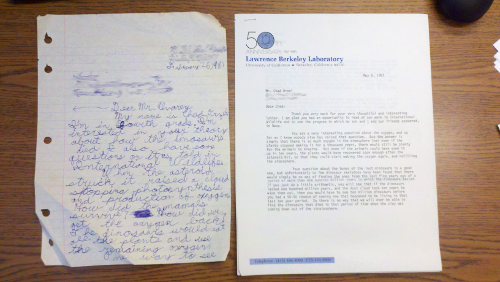 My letter to Luis Alvarez and his reply

Chad, I had a similar experience with Carl Sagan in my youth; and again when I met him in person in 1977. He was quite dismissive.

I think the comment about physicists disagreeing about the effect on temperature was good because it shows that not everything is agreed upon. When I was in high school, I remember someone questioning an evolutionary progression and the teacher saying, 'Yes, and a lot of botanists would agree with you.' It really made us feel good to think that we were entering speculative territory.

Don't be too hard on your ten-year-old self - the tone is (at worst) a little naive but I bet Alvarez was quite delighted by the letter. You asked thoughtful questions and he clearly wanted to encourage your spirit of scientific inquiry through his reply.

When I was ten years old, I was writing letters to NASA and JPL, and wound up getting a visit from Gordon Cooper.

So that was nice.