It's been a good while since I did any Cute Kid Blogging, due to excessive busy-ness. There's big news among the younger residents of Chateau Steelypips, though: SteelyKid lost one of her front teeth the other day: 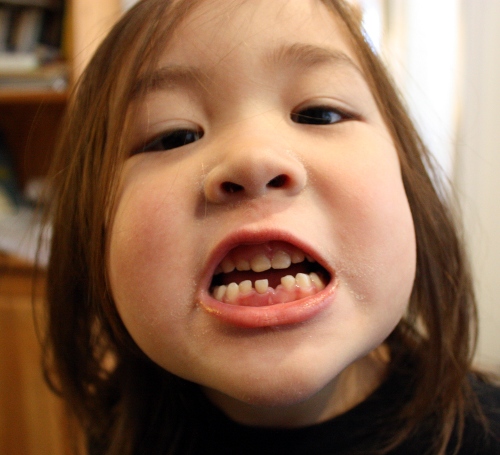 SteelyKid showing off her missing tooth

That gap? Wasn't there on Friday morning. Lest you think we're horrible people who let her run headfirst into a pole or something, while we were surprised to have one come loose this early, she's within the normal age range for losing baby teeth. Just barely, but then she got teeth really early, too-- she had eight at eight months old. So I guess it's to be expected that she'll lose them early, too-- one of the ones next to the missing one is already a little loose.

She brought home a battered book about a moose with a loose tooth a while back, when they were clearing out shelves at preschool, which of course features the Tooth Fairy. And, of course, the tooth actually came out at school, and was sent home in a baggie labeled "For the Tooth Fairy." So, we had a choice of whether to stand on principle and not invoke fictitious supernatural entities... 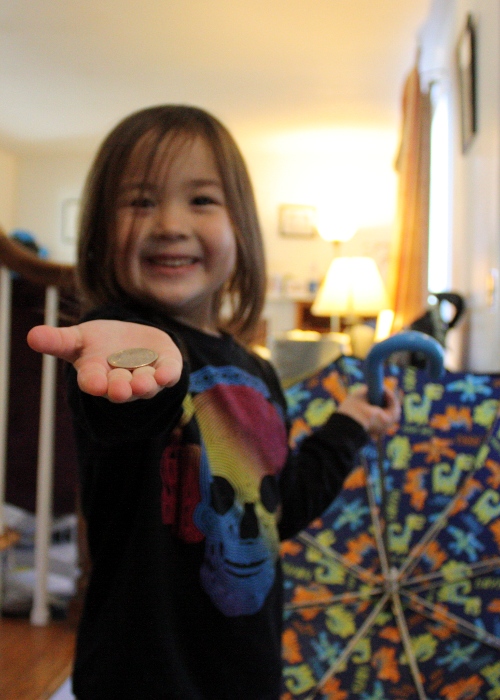 SteelyKid with the gold dollar she got from the tooth fairy.

...or we could just stuff a dollar under her pillow, and avoid the whole issue for a few years. I could quote Pratchett here, from Hogfather, about the need to believe little lies as children in order to be able to buy into bigger lies like Justice as adults, but really, we're just cowards. And she's super happy with her gold dollar (note to self: go to the bank and get more gold dollar coins. That, or we could branch out to foreign currency-- I've got some spiffy-looking Japanese coins that we could give her. It's not like she really understands money at this point.)

In some sort of Conservation of Teeth kind of deal, The Pip is cutting at least one new tooth, which has him a little more brittle than usual, but really, he's basically a cheery little dude: 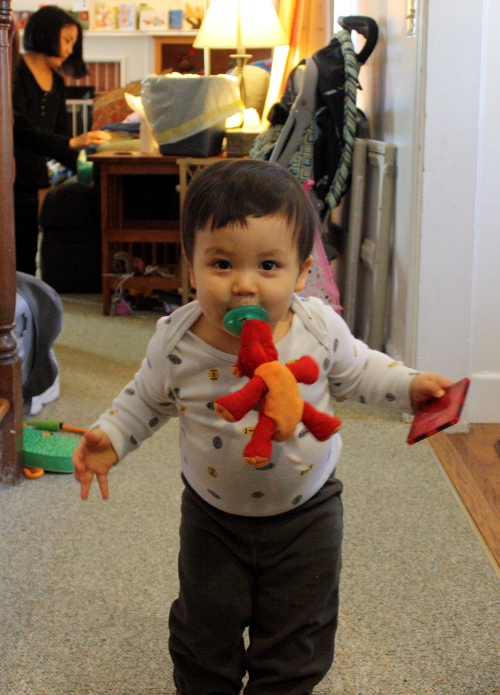 The Pip is a happy little dude.

I like that picture, where he's lurching to a stop just short of the step into the library, but it sort of looks like he's either about to take a bow, or just finished one. He's highly mobile now, working on running, but mostly just walking very fast in more or less random directions. Happily, he finds his big sister endlessly entertaining, and she's generally very good with him.

When not losing teeth, she's way into building things, as you can see from the "kingdom" she built with her Magna-Tiles in the "featured image" above. They have a set of these at day care-- clear plastic tiles in geometric shapes, with magnets around the edges so they can stick together. They're expensive, but awesome, as you can see above, or in a slightly more characteristic pose below: 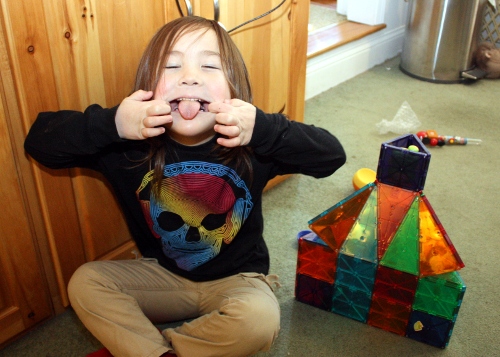 SteelyKid mugging for the camera.

And that's what SteelyKid and The Pip are up to these days.

Thanks for the update. They are getting big.

I'm a far more radical atheist than you are, but the one thing I miss about not having kids of my own is the Tooth Fairy, the Easter Bunny, and Santa Claus.

In my house, the tooth was placed in a tall glass of water by the side of my bed. When I awoke the next morning, there was a coin at the bottom of the glass, and no tooth. How amazing!

Still, well into young adulthood, my parents would always make sure that there was one, perfect, unasked-for present under the tree that said "From Santa Claus."

To this day, I'm reminded that the greatest gift is to be loved and to be thought after.

Magna-Tiles are awesome. And yes, very expensive. But they are so good for shape recognition, for color recognition, for geometry, for imaginative play... We have the 32 tile set which is sufficient for our 2.5 year old, but somewhat limited when Mommy and Daddy start playing with her toys.

What I really like about Magna-Tiles is that you can make four of the five Platonic solids with them. It's hard to get the icosahedron together before it collapses, but it can be done. That said, my 5-year old boy mostly prefers to use Magna Tiles to make parking garages for his Hot Wheels cars.