This past weekend was more complicated than it might've been. On Friday night, we drove to Whitney Point to my parents' house, then on Sunday morning very early we drove back to Niskayuna so I could make it to Union's graduation on Sunday (I arrived just in time to hear Civil Rights icon John Lewis give the main commencement address, an excellent speech).

The reason for all this driving around was that on Saturday evening, I was inducted into the Whitney Point Central School District Hall of Fame. This is, quite literally, a hall, run ning from the front lobby of the high school to the cafeteria (more or less): 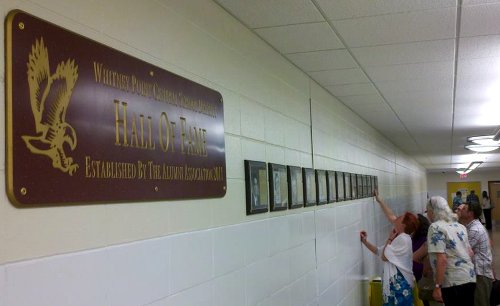 It's also very new-- this was the third year-- but I think it's a great idea, and I'm deeply honored to have been included. They've got three categories-- alumni, school employees, and community members-- and include people who have made significant contributions to the community or their chosen profession-- in my case, science and science communication. The other honorees this year were Dr. Dan Driscoll, who graduated from WP in the 60's and came back after medical school to start a practice in town; Marv and Alice Gregg who ran the main grocery store in town; Barb Quarella who taught basically every kid in town my age and younger to swim; and Iva Jean Marsh Tennant, who is an alumna from the 60's and a distinguished math teacher at another school in the area.

Like I said in my thank-you speech, it's an honor to be included with people who have been such an integral part of the community for so long. The school has meant a huge amount to me and my family-- not only did my sister and I and two cousins graduate from there, but both my parents worked in the district (my father taught sixth grade for 30-odd years, my mother was the elementary school librarian for several years before moving to the local BOCES), my aunt and uncle worked in the district (my uncle taught social studies in the high school, my aunt taught in the elementary school), and I still have cousins in town working with the school.

There's a running joke in my family about my maternal grandmother claiming to have a plaque in her honor in the long since demolished public school she attended in the Bronx. That adds a little extra amusement to the fact that I really do have a plaque in my honor in in the high school I attended (pictured at the top of this post; the citation is very long, so I'm not going to transcribe it, but it will presumably be added to the web page at some point). But mostly, as I said, I'm honored to be included in a community that's meant so much to me over the years. And if having my picture and bio up there helps another kid from the area to consider a broader range of career possibilities, including even SCIENCE!, then that will be more than worth the additional travel on a busy weekend.

Ready for Some (Division III) Football

The preceding comments about my alumni oganization were brought on by a bunch of factors-- the arrival of a Maryland alumni publication this week, the update-your-information questionnaire from the Society of Alumni, a visiting speaker last week who was two years behind me at Williams. Probably the…

Economic barriers in the elite University (and in science)

This week at #scio14, Danielle Lee is leading a discussion on privilege in science. I'd started this post and abandoned it a few weeks back, but I think it speaks to a similar phenomenon as she describes in her post. Low-income students are being lost not only to science, but often to the college…

Blogging will probably be light this week; while I was in Ohio a week ago for a happy event, this weekend was much the opposite, and I'll be out of town part of the week at a memorial service. In the meantime, though, I got tagged (twice!) with a meme that I've already seen pop up recently on…

A couple of years ago, we got a nasty shock when my 98-year-old great-aunt died unexpectedly. It's happened again, with her sister Ethel (known to a lot of the family as "Auntie Sis," because she had the same first name as her mother, my great-grandmother), who died in her sleep last Sunday night.…

Congrats, BMOC. I've been back to my high school just a couple of times in the 15 years since graduating, and I'm amazed at how much has changed there.

Now that the demise of Google Reader is a week away, what's a good RSS service to follow you? Worth a blog post?