Nostalgia and the Next Generation

"Daddy, I wanna play with the robot dog!"

"It's not a dog, honey, it's an Imperial walker. An AT-AT. A fearsome armored assault transport used to overwhelm the Rebel defenses in the battle of Hoth."

"OK, fine, you can play with the robot dog."

We came down to my parents' for Thanksgiving this year, because both Kate and I are really busy with work at the moment, and didn't need the additional stress of planning and hosting a big dinner. On Friday morning, my dad went up into the attic and dug out the bags containing the vast collection of Star Wars toys my sister and I amassed in the late 70's and early 80's: 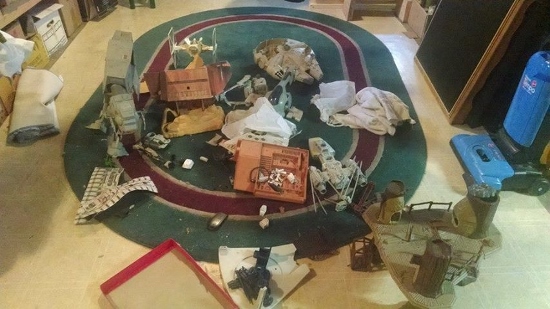 The larger toys from our Star Wars collection.

I was right in the prime demographic for this-- I was six when the first movie came out-- and my sister is four years younger than me, so we had a good long run with Lucasfilm and Kenner. We didn't quite have a complete set of all the original action figures, but were pretty close. Some of these have gone missing, and the original Lando Calrissian's head snapped off at some point, but my dad found most of them up in the attic, and then SteelyKid spent a happy hour or so carefully washing two decades worth of dust off them (as seen in the "featured image"), and asking me to name them all (a lot of the character names are totally gone from my memory, though I know when they appeared in which movie). And I still vividly remember how all the ships go together (though a lot of pieces are broken or missing, and some of the springs and catches have worn out). She particularly enjoyed the speeder-bike that blows apart when you press a button on the back.

She's never actually seen any of the movies, thus the dialogue snippet above, but she's sort of vaguely aware of Star Wars as a cultural force, thanks to various classmates. The original movie is probably a little too scary for her still, but maybe one of these days...

(Assuming it's possible to get a version where Han shoots first, that is. I have principles...)

Anyway, I spent a good deal of Friday back in 1981. Hope the end of your week was half as good.

Dinner in the Invisible Kingdom

[Scene: Dinner at Chateau SteelyPips. DADDY is starting to say something about his day at work, when STEELYKID interrupts.] STEELYKID: If you eat too many hot dogs, you'll turn into a hot dog! DADDY: That would be pretty silly. Luckily, you're eating chicken for dinner. Eat your chicken. STEELYKID…

Casual Fridays: How does Star Wars end? Depends on how old you are

Here's a bonus bit of analysis from last week's Casual Fridays study. In addition to asking respondents how familiar they were with our selection of stories, we also asked them to describe some detail of the story that was independently verifiable, like how the story ended. The reason we did this…

A Colbert Report re-run about the financial crisis has just ended, so I turn the tv off, grab my jacket and the leash, and head out for a walk with the dog. She's oddly pensive as we head up the street. After a little while, she stops and asks, "What was that all about?" "All what?" "All that '…

This is so great. The younger generation in our home have become interested in Star Wars through Angry Birds. A very different entry point! But they are reminding us and inspiring us to take a new look at the whole thing. Now I bought a big book presenting the whole Star Wars universe -- because there is so much I don't know of what is now the canon: from the Clone Wars series and the comic books and everything. And the big girl, eight years now, wants to play the Star Wars RPG.