"Daddy, you know what? I bet you didn't know, but my school bus can fly."

"Yeah, there's a button up at the front with a picture of a flying bus, and if you press the button, the bus flies."

"Yeah, and guess what? The other day, the bus driver called me, and said '[SteelyKid] come up here, and press the button,' and I pressed the button, and the wings came out, and we went flying."

"You didn't go anywhere else interesting in between, ith the flying bus?"

"Well, we flew to Grandma and Grandpa's. That was fun. But we had to get to school."

"If the seats and seat belts get all feathery, doesn't that tickle?"

"No, it's just really soft and warm and nice. And guess what? When the seat belts get all feathery, you get to pick a couple of feathers out to keep."

"Yeah, and the feathers grow right back, like... like... Like in that book with the blue warrior, where he shoots off the heads of the ten-headed demon king? The feathers grow back like the demon heads grow back."

"I guess that's good for the bus."

"Yeah. If you want to kill the demon king, you can't shoot his heads. They grow right back."

"Right. If you want to kill the demon king, you need to shoot him in..."

"I guess. But it's important. So remember that, the next time you run into a ten-headed demon king."

"I will. You can do it, too. If you run into a demon, you could take the sword that Mommy gave you, and stab him in the belly button. Then you could clean the sword, because it would have blood all over it, and put it back in the case for next time."

"Um, right. The next time I run into a ten-headed demon king. Do you see a lot of demons around?"

"Well, we ran into one when we were flying in the bus. But the driver let me use the weapons, and I shot him. Right in the belly button!"

"Your flying shcool bus has weapons?"

"Yeah. It has swords and bow and arrows and daggers and even guns and stuff. There's a room at the back with all the weapons in it, and all the kids get to go in there and practice using the weapons."

"That sounds like some bus, all right. And this is the bus you ride to school every day?"

"Yeah. Well, not this Monday, though. They need to work on the flying bus on Monday, so we have to ride just a regular bus."

"Well, those flying buses do need a lot of maintenance..."

"Yeah. It has four wings, but they need to fix two of them, and put some other ones on instead. So we'll be riding a regular bus to school on Monday."

"Once they fix it, though, you'll have the flying one again, right?"

"That's pretty awesome. I didn't know about that; thanks for telling me."

"You're welcome. And remember, shoot the demons in the belly button."

The Pip was sent home from day care yesterday with the bug of the moment, so I'm home with him today. The timing couldn't be worse, because Kate has an argument in a court in Rochester, so she was away overnight, meaning I'm temporarily a solo parent.

Happily, Il Duderino has been in a remarkably good mood, not obviously miserable. But I'm way short on both sleep and time, so no heavy physics blogging. Instead, you get this rough transcription of a conversation with SteelyKid this past weekend. Because she's awesome: 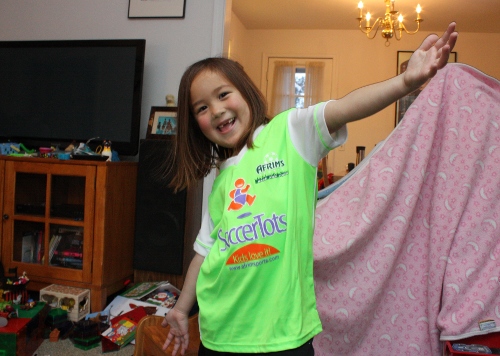 And just for balance, here's The Pip working on his unique artistic vision: 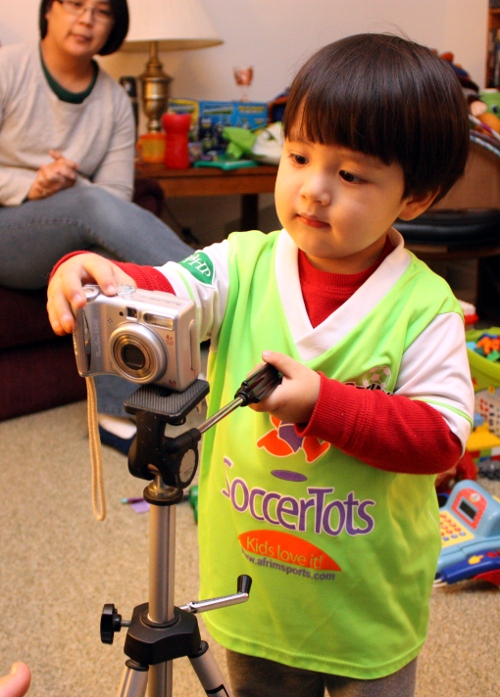 The school buses you use have seat belts? Great - not the case for this area.

The buses do, in fact have seat belts. though there was a bizarre moment at the bus orientation when the director of transportation services for the district advised us to tell our kids not to bother, because the buses never have significant crashes. When we went out for the practice bus ride, the assistant director in charge of the elementary school said "We're going to wear our seat belts" in a tone that clearly indicated he thought his boss was insane.

Did somebody see the business side of MacDonald's cash register and suddenly believe in heraldry? Beware of "green" heraldic tinctures.

A few buses (but just a few) in my school district had seat belts back in the 1970s when I rode them then. I was surprised to discover that the buses my daughter rides to school don't have them.

But then I had a conversation about this in which somebody claimed that seat belts for school buses had been mostly abandoned in favor of "compartmentalization" with taller, padded seat backs, so that in a crash the students would be held between the seats (those first started to appear in the 1970s too... but it was on the same buses with the seat belts, I think). The claim was that this worked better than the belts because students couldn't be trusted to operate the belts consistently with just one adult in charge, and because they might whack each other with the metal belt ends or something. Given everything else I've read about automobile restraints, this seemed doubtful to me, but OK...

Like Matt, I was on a few school buses in the 1970s that had seat belts, but most did not (except for the driver, of course). I've also been on commercial buses (e.g., to Boston, saving me the trouble of pahking the cah), which unlike most school buses are routinely driven long distances at full highway speed, and they don't have passenger seat belts either.

Bus accidents do happen every now and then. That's the primary reason school districts are more likely to close due to weather (at least here in snow country) than other employers. In the school district where I live, there was an incident a few years ago where a school bus was forced off the road during a snow storm to avoid colliding head-on with a car in its lane during a snowstorm, so there is a rational basis to this fear.

I think the main argument is that passengers are less likely to be ejected from a bus than from a car, at least in a head-on collision. Movies and TV notwithstanding, being thrown clear is one of the most effective ways of getting killed in a vehicle crash. I'm less sure about sideswipes and broadside collisions, but those are usually at a lower Δv than a head-on. There is also the question of internal injuries when you are thrown against the seat in front of you.