Not that long ago, SteelyKid was doing something violent with toys (she's very tough, as you can see from the featured image above), and in the process made the canonical falling-bomb whistle noise. And it occurred to me to wonder, why that sound?

I mean, I've seen footage of falling bombs and the canonical sound seems like an accurate enough. But I'm not sure I understand it from a physics perspective. Specifically, when you do the falling-bomb whistle, you do a whistle that decreases in pitch. But the bomb is falling faster as it approaches the ground, so if anything, I would expect the pitch to go up-- if the sound is made by some sort of turbulence effect, you would guess that the frequency should increase as the speed goes up. (If it's a deliberate effect from some sort of whistling thing, on the other hand, the pitch might be fairly constant.)

So, why is that? Is it a Doppler effect thing? (As you know, even if your name's not Bob, the Doppler effect is a phenomenon involving waves from a moving source, that shifts the frequency an observer detects up when the source and observer are moving together, and down when they're moving apart. This is why a police siren sounds higher in pitch as it comes toward you, and lower as it goes away.)

Well, if you dropped a bomb from a height of 1000m (just to have round numbers), the speed when it hit the ground in the absence of air resistance would be a bit less than half the speed of sound, which would give a comparable decrease in the frequency heard by the pilot of the plane that dropped the bomb (the Doppler shift of a sound at a given frequency is equal to the frequency at the source multiplied by the speed of the source divided by the speed of sound). Obviously, a real bomb would experience air resistance (it couldn't make sound otherwise), so the actual shift would be less, and would eventually reach a constant pitch as the bomb reached terminal velocity. This gives a back-of-the-envelope (well, margin-of-the-class-notebook, because that's where I actually did it) sense of the scale of the Doppler effect you could expect, and is basically consistent with the canonical whistle sound.

But if it's a Doppler thing, the change in pitch should depend on the frame of reference. That is, the people in the plane would hear it go down, but people on the ground would hear it go up. But nobody ever does the falling-bomb noise in the reverse direction. And I have no personal war-zone experience to draw on, here-- maybe I should ask my Senior Middle East Correspondent, who came under mortar fire in Libya a while back...

I suppose the always-decrease-in-pitch thing could just be psychology-- if you're playing war, it's much more comfortable to put yourself in the position of the person dropping the bombs than the person being bombed.

On thinking about it a bit, though, you might be able to get a decrease in pitch from a falling bomb by being off to the side, because the velocity that matters is the velocity along the line of sight. So, if you were standing 1km away from a bomb falling from a 1km height, the initial downward velocity could be broken down into components that are toward you, and perpendicular to you, as shown in the figure-- the red arrow is along the line-of sight, the orange perpendicular to it. Each component would be 70% of the initial speed, so that would give an upward Doppler shift of 70% of the maximum, as the Doppler shift is due only to the line-of-sight component. 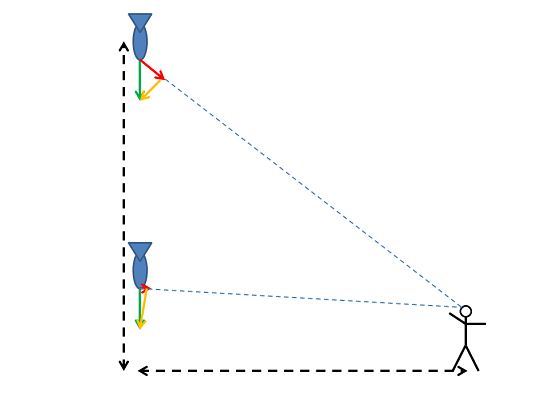 Diagram of a falling bomb, showing the components of velocity.

Just before the bomb hits, though, the velocity would be nearly perpendicular to the line of sight, so the Doppler shift would be zero (to first order). Which would be a decrease in pitch from the starting condition. So maybe somebody on the ground would hear a decreasing pitch after all, at least provided they're a fair distance from the impact point.

Of course, if the bomb was released from rest, it would be speeding up, and the increasing shift from that might be bigger than the angle effect. But once the bomb reached its terminal velocity, the angle effect would give you a reduction in frequency, in the same way that you get the characteristic "eeeeeeee-owwwwwww" effect as a fast car goes by-- the Doppler shift moves the frequency up as it comes toward you, is zero just as it passes, and then shifts the frequency down as it recedes.

Which of these effects would win out is difficult to say. This, of course, demands some sort of VPython simulation, but I have too much other stuff to do this morning-- I've already spent an order of magnitude more time on this post than I intended to...

And, of course (to head off an inevitable comment) I'm sure this is Google-able, but I offer it here as an example of the thought processes of a physicist confronted with an anomalous result. And also an example of the weird stuff that distracts me when I'm playing with the kids...

Only the people on the ground hear the bomb, people in the plane don't.

I've read lots of accounts that the bomb stops making any sound shortly before it hits??!!

I'm more interested in the physics of just how the bomb generates the sound. Is it an intentional part of the design? (A bit of googling about whistling bombs suggests that sometimes it was -- but other sources say it's a side-effect of the aerodynamic design of the bomb, or lack thereof.)

Of course, one reason why you don't hear reports from ground zero is that people and equipment placed there tend not to survive the impact and explosion (which of course is the purpose of the bomb).

I also suspect the sound comes not from the bomb itself (unless it is specifically equipped) but from the bow wave in front of the bomb. The frequency of sound emitted is probably not the same for all directions, although I haven't done the calculation. That plus Doppler shift should cover it all. The intensity certainly won't be isotropic either: it will be concentrated at the front of the bow wave.

There are several elements to this. The Stuka dive bomber was fitted with a siren for psychological effect, so with that it was the aeroplane that made the noise. With the V1 it was never heard while with the V2 the noise of the engine was heard until it cut out. Technically neither of those were bomb noises.

Other way around with the V1 and V2: The V1 was the one with a noisy pulsejet, the V2 was the supersonic ballistic missile.

Would the same line of thought apply to the sound associated with artillery shells?

I can vouch for the 'descending whistle' sound in the case of falling bowling balls, at least. From an estimated peak altitude of about 1500 feet, and standing approximately 1000 feet away from the ultimate impact point, the sequence goes:

- Whistle starts by getting gradually louder at a more or less constant pitch.

- In the last few seconds of the drop, the pitch drops noticeably, all the way down to the ground.

- There is a sudden "Thump", then silence. There is no loss of sound before impact, probably because I had a clear line of sight to the impact point. If there had been trees, buildings, or other obstructions, it might have blocked the sound for the last fraction of a second.

From a non-diving aircraft the bomb starts with a horisontal velocity the same as the aircraft and keeps much of that till impact so the position of the listener relative releasing point ought to have an impact on the Doppler effect.
Anders Eg