In the comments to yesterday's grumpy post about the Fermi paradox, makeinu raises the idea that advanced aliens would be using more targeted communications than we do:

On the point about electromagnetic communications: even we are now using lasers to target communications with space, because it’s simply more efficient and reliable.

It’s also basically impossible to intercept, since you literally have to interrupt the beam to do so.

This is true, to a point, but when you're talking about interstellar distances, it's not quite true that you have to interrupt the beam to detect communications lasers. While on Earth we tend to think of lasers as collimated beams that stay tightly concentrated over vast distances, that's really only because we never follow them all that far. In fact, a perfect laser beam still expands, albeit very slowly. If you start looking at very long distance transmission, the beam becomes huge, even in the perfect Gaussian beam case. Things get even worse when you start doing real experiments where the beam has to pass through and reflect off stuff. This is why when you see cool publicity photos of Lunar Laser Ranging experiments (the one above is from this NASA experiment), you always see the beams shooting out of observatory domes-- they need to start their beams from a big telescope to have any hope of detecting the return beam.

Why is that? Well, any source of light that starts from a restricted area must be expanding, due to basic physics. In a sense, you can think of this as an uncertainty principle kind of thing-- the photons making up the beam are originating from a small region of space, meaning there's some uncertainty in position that must be matched by an uncertainty in momentum. But the momentum of a photon is a combination of its wavelength and direction, which means that for light of a given wavelength, there must be some spread in the direction of the beam. The smaller you make the starting source, the bigger that spread, and the more the light expands-- this is why diode lasers requires collimation lenses: the diodes are a hundred microns or so in size, and thus have an extremely large divergence.

(Note that it's not strictly necessary to invoke uncertainty as an explanation for this- Maxwell's equations get you the same result. But I'm a quantum kind of guy, and I think it's a cute analogy.)

So, how big does the beam get? Well, assuming you're doing something like shooting the beam through space to communicate with a distant probe, so you can neglect pesky atmospheric effects, there are convenient mathematical formulae to get you the basic scale. The quantity that matters is a thing called the Rayleigh range (OK, that page uses "Rayleigh length" but my professors all said "range," probably for the awesome alliteration):

this is the scale length for the expansion of a laser beam, and it depends on two experimental parameters: the size of the beam at its smallest point (the "waist"), w0, and the wavelength of the light λ. One Rayleigh range away from the waist, the beam has doubled in area, or increased its radius by the square root of two.

The expression for the exact size of the beam at a given distance z from the waist is:

So, figuring out just how big a communications laser would be at a distant star is just a matter of plugging numbers into that equation. Which you can do in any competent graphing program, and end up with a graph like this: 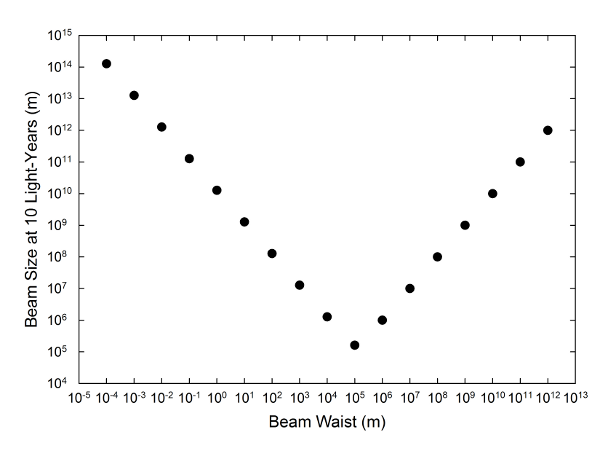 The radius of a laser beam at a distance of 10 light-years, for various starting beam sizes.

This is a log-log plot, so each tick mark represents a change by a factor of 10. It shows the size of a 400nm laser beam (at the short-wavelength end of the visible spectrum) at a distance of around 10 light-years (a hair over, as I just used 1017m rather than copying all the digits) for various initial beam waists ranging from a tenth of a millimeter (so, basically, just taking the beam straight out of a diode laser) to about the size of the solar system.

As you can see, there's an optimum value here, a place where the increasing Rayleigh range as you increase the size of the initial beam waist gets rid of most of the expansion, before the increasing initial size takes over and you end up with a huge beam. For the numbers I put in here, that happens at an initial beam radius of around 100,000m, leading to a beam radius of about 160,000m at the far end.

For an ideal beam launch, the initial waist would match the size of the mirror on the telescope sending the laser out into space, so what this tells you is that if you start at the size of a good-sized asteroid, your beam will be the size of a slightly larger asteroid when it arrives ten light-years away. Which is still pretty trivial on the scale of a solar system, but is going to be a whole lot bigger than the size of an interstellar robot probe. A more manageable mirror size, say ten meters (which you could maybe just imagine putting on a robot probe to another star) would give you a beam a million-plus kilometers in radius, covering a decent amount of real estate even by interplanetary standards.

(We won't even get into the practical issues of detecting such a beam, let alone aiming it... From an aiming standpoint, you might be better off making the beam bigger, and just lighting up the entire target system.)

This is all a bit of a nitpick, of course, since the really important thing is that laser-based communications between interstellar probes would be much more a line-of-sight thing than spraying radio waves all over the place. This Gaussian beam business doesn't matter at all if you're talking about trying to see traces of aliens communicating between two different stars in our field of view, so from a Fermi paradox standpoint, laser communications is still pretty good as an explanation for why we don't hear alien communications chatter.

At the same time, though, it doesn't necessarily help for the more specific problem of not seeing any traces of alien probes, etc. here. If aliens from another star were using lasers to talk to probes exploring our solar system, the light from those lasers would, in principle, be detectable over a fairly wide area. But, of course, we'd need to be looking in the right direction, at the right wavelengths, and at the right time, so the odds of picking anything up are still pretty tiny. But it's a nice excuse to talk a bit about laser optics...

(One obvious question to ask would be why we take the beam waist to be at the launch point-- why not focus the laser onto the distant target, making a smaller spot? And it's true, you can do that. But if you want to do that, you basically need to reverse the plot above-- for a given spot size on the horizontal axis, the vertical axis tells you the size of the launch mirror you would need to use to focus down to the distant point. So, if you want a 100m laser spot on the far end, you'd need to start from a mirror with a radius of about 108m, or a bit larger than Jupiter. That's a little more daunting, even before you get to the question of how you aim that precisely enough to be useful.)

LLCD http://esc.gsfc.nasa.gov/267/271.html efficiency is (in estimation numbers) 1 bit/photon. Given that and a 5W laser, how big a telescope do you need on the moon to download cat videos given a 10 m transmitter telescope on earth? A 1m telescope? How about on mars? Alpha Centauri?

A laser the size of Jupiter, that's all? How about a Nicol-Dyson laser, (a phased array laser measured in AU)?

A Nicoll-Dyson laser has the advantage that you can just scrawl your note across whichever hemisphere is facing the solar system. Hard to overlook a message written in flaming letters hundreds of kilometers across.

Nice, thank you for that more detailed explanation. I knew some of that, but I'm not trained in the actual maths, so this was very enlightening.