Why Is Snow White?

It didn't make the news, because skittish media types are mostly based in New York City and thus don't care about anything north of Westchester County, but we had a big snow storm yesterday. It started snowing Sunday night, though, and kept up through pretty much dinnertime Monday. Both the local schools and the snow-day day-care program we signed the kids up for were shut down, with good reason- I had to go to campus for my 10:30 am class, and that two-mile drive was pretty nerve-wracking.

Since the kids were home for the day, we did a bit of playing outside, even though the temperatures were in the low double digits Fahrenheit. At one point in this, the Pip asked "Daddy, why is the snow white?" I didn't give a great answer to that at the time, but it's one of those little-kid questions that is sneakily really good, so it's worth a blog post (even though it's not like he's going to read this...).

The whiteness of newly fallen snow is, of course, one of its primary defining characteristics, so it's tempting to just say that, you know, that's the way snow is. But it's actually a pretty good question, because snow is really just frozen water, and frozen water tends to be transparent: 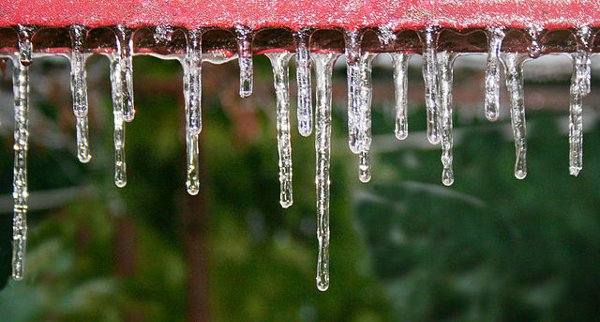 A row of icicles, photo from Wikimedia.

There's a little bit of reflection off the surface of the icicles in that photo (from Wikimedia), which is what allows you to see the icicles at all, but for the most part the ice is clear.

Now, you might want to say that snow is different than ice in some way, but in fact, if you look closely enough, you see that single snowflakes are also mostly clear ice: 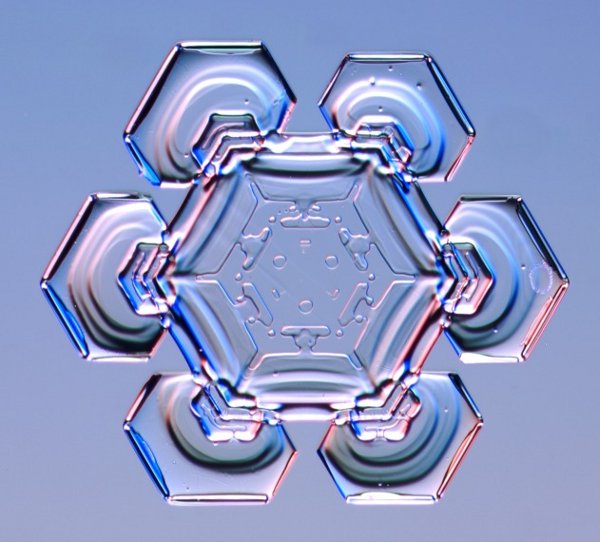 A single snowflake, photo from Caltech's gallery of these.

I picked a relatively flat flake for this illustration, but Caltech's snowflake gallery has dozens of these photos, and they're all fundamentally similar. On a microscopic level, snowflakes are transparent, just like icicles.

So why is snow white, then? Well, it's white because you're basically never looking at just one snowflake, unless you're in Ken Libbrecht's lab taking pretty photos. When we look out the window at great drifts of snow and contemplate either jumping in them or shoveling the driveway, we're seeing millions and millions of individual snowflakes all heaped together.

For both icicles and snowflakes, we see a little bit of reflected light coming from the surface where the air stops and the ice begins (or vice versa). With an icicle, there are only two such surfaces, so we only see a small bit of reflected light off the front. Most of the light that hits the front side of the icicle passes through, so we can clearly see light coming through from the other side and know that the ice is transparent.

A snowdrift, on the other hand, contains millions of such surfaces. Each individual snowflake only reflects a tiny bit of the light that hits it, passing most of the light through, but the light that gets through hits another snowflake, then another, and another, and another. The end result of all those tiny individual reflections is that the majority of the light hitting the front side of the snowdrift ends up bouncing back. And so, drifts of newly fallen snow appear bright white, and very little light makes it through to the other side.

(Snow isn't completely opaque, of course, as anyone who has ever built a snow fort knows. Even a fairly thick block of snow will pass a little bit of light, providing a diffuse illumination inside. Also, all those billions of snowflakes are reflecting light in slightly different directions, which is why you can't see your reflection in a snowdrift.)

So, why is snow white? Because there's just so much of it. A snowflake is basically clear, just like an icicle, but a billion snowflakes in a pile look white because all of their individual reflections combine to send all the light coming in back where it came from.

Not mentioned, refraction. As long as the angle of incidence isn't exactly ninety degrees, whatever light is transmitted, has its angle changed. Lots of small refractions add up to scatter light, just as much as lots of direct reflections.
You can see similar effects with fog, which is just lots of tiny water droplets (or ice particles). Get density of droplets in your line-of-site, and the beam of light reaching your eye mostly consists of reflected/refracted photons.

A misplaced comment asks in another thread:
So have I understood you right: an individual snowflake is transparent, but a big mass of them scatter light and look white. But when one snowflake lands on my coat, it looks white. And for that matter the snowflakes falling through the air look white too.

I'm a little surprised this didn't come up sooner-- certainly, it's what I worried about as soon as I hit "Publish"...

The answer is the same "Lots of interfaces" argument, just on a smaller scale. First of all, the really big fluffy greeting-card snowflakes tend to be agglomerations of many smaller snowflakes. But even the lighter sort, where you really have single crystals, tend to involve very complicated shapes with lots of edges at different angles, packed into a very small volume. And each of those surfaces offers a chance for reflection, so all of them together make individual snowflakes look more white than transparent, unless you do something to magnify them to the point where you can discern individual surfaces, and see that the material really is transparent.

For example, high-visibility safety garments have a much higher reflection coefficient (over a narrow range of angles) than pure white cotton, paint, paper, and snow.

The picture of the single snowflake in your article seems to be a depiction of its transmission of light rather than its reflection of light. I suggest that this and the other crystals depicted in the source of reference are laboratory experiments to show the endlessly various 2-D shapes of snow crystals, which is indeed a wondrous phenomenon in own right, rather than to show the delightful exquisiteness of their 3-D surface structures as actually occurring in the real world outside of the laboratory environment.

To describe snow crystals in terms of ice does not help to answer the question "Why Is Snow White?" because glacial ice [compacted snow] is far from being white: it has a blue tinge, or to be pedantic, it is more cyan than blue. Human vision perceives unpolluted snow as white, not the cyan of compacted snow. To explain why we perceive snow as white yet its ice is actually cyan requires investigating its microscopic surface structure rather than its macroscopic water-like properties.