Today, I officially stopped being department chair, and started my sabbatical leave. I also acquired a new toy: 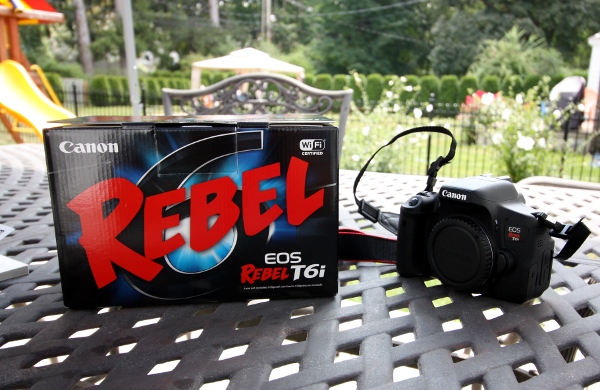 My new camera, taken with the old camera.

My old DSLR camera, a Canon Rebel XSi that I got mumble years ago, has been very good for over 20,000 pictures, but a few things about it were getting kind of flaky-- it's been bad at reading light levels for a while now, meaning I'm constantly having to monkey with the ISO setting manually, then forgetting to change it back when I move to a brighter location and taking a bunch of pictures where everything is all blown out. It also stopped talking to the external flash unit, after I had gotten used to the indirect flash option (though it looks like that might be a problem with the external flash unit, as it won't talk to the new camera, either...). I could probably get those issues fixed, but it would probably cost about the same as a new camera body, with new cool features, so...

So I got a new camera. (And, as it turned out, I can now spend my vast accumulation of credit-card reward points (that I never remember to do anything with) on Amazon, so I didn't spend any real money on this at all...) This is a Canon Rebel T6i, a slight upgrade from the XSi (not a full professional-grade DSLR), but the advance of technology over the last mumble years means it has a bunch of fun new features-- bigger sensor, faster speeds, video capability. So it'll be a nice toy.

As a bonus, I'm also acquiring a casual sabbatical project-- for a while now, I've watched other people do the photo-a-day thing, and thought that might be fun. While I was saddled with administrative hassles of being chair, that wasn't really going to work, but while I'm on sabbatical, I can devote a little time every day to taking photos.

So, I'll be trying to take and post one picture a day for the next year (Or at least GIMPing photos taken on a previous day to get them down to a size I can post here...)-- which happens to be a leap year, so 366 days, woo-hoo-- and we'll see how that works out. For the officially official first photo of the set, we'll use one of the test pictures I took of Emmy: 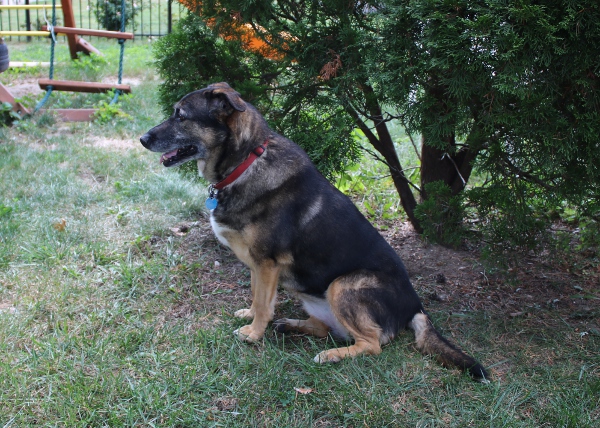 Emmy, the Queen of Niskayuna, regally surveying her back yard.

I cropped and scaled this, but didn't do any color tweaking. Emmy's too jaded about photography to actually turn her head and look at the camera, but this pose has a certain dignity...

(For comparison, here's the first posted photo from the previous camera.)

Congratulations on all these bits.
I've never done the picture a day, but I do spend at least one, if not two, hours every Saturday in one of the nature areas around kalamazoo - we're lucky to have a bunch of nature conversancy locations, nature centers, and MSU research locations near us - with camera, couple lenses, and tripod. Even the least productive days leave me refreshed, relaxed, and ready for more students.

Just FYI -- your new camera doesn't actually have a physicall bigger sensor than your old one. All digital Rebels use the same APS-C sensor size (as do Canon's xxD series and the 7D series). Your new one does have more photosites, though, so it has a higher pixel density.