Last weekend, while the kids were at my parents', Kate and I decided to go over to Williamstown and look at some art. We originally intended to go to the Clark Art Institute, but it was mobbed, so we drove on to MassMoCA instead.

I told several different people about that, all of whom said "Oh, did you go to the Van Gogh show?" Which made me want to see the Van Gogh show, and since I'm on sabbatical and not teaching, I drove over there and actually went to the Clark this time. (Which was still mobbed, but I got there early enough to get in...)

The Van Gogh exhibit was, in fact, very impressive. They also had the famous "Whistler's Mother" picture on display in the separate gallery at the top of Stone Hill, so I walked up there and saw that. (It's huge-- I sort of assumed it was a small painting, but no, it's like five feet on a side...)

Of course, it'd be a little cheesy to post a photo of a painting (though I did take several; not in the Van Gogh and Whistler exhibits, but in the main collection), so instead here's a view from above of one of my very favorite places on Earth: 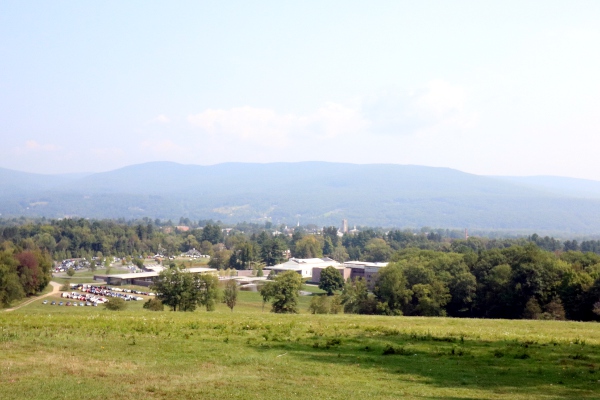 View from the top of Stone Hill, behind the Clark Art Insitute in Williamstown.

The Clark is the complex of buildings and parking lots at the base of the hill, and behind it in the center of the photo is Williams College, my alma mater. Here's a zoomed-in version as proof: 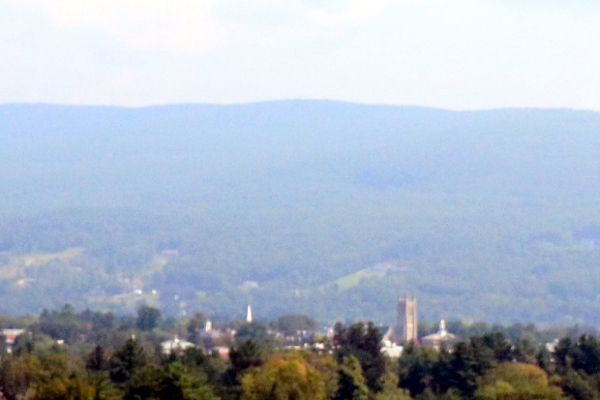 Williams College, magnified from the wide shot above.

You can clearly see Thompson Chapel, Griffin Hall, and the Congregational church. This would be clearer if I'd had a different lens on the camera, but I wanted the wide-angle for inside the museums, and wasn't about to go all the way back to the bottom of the hill to get a stronger zoom lens just for the one picture. Given that this is about 1/25th the area of the original photo, though, I think that's pretty damn good.

And the wide shot gets more of the Berkshires; it was a hot and hazy day, but you can still tell that Williamstown is really extremely pretty. Which is, after all, the point of taking this photo in the first place...

For the 42nd installment of this photo-a-day thing, it seems appropriate to try to do some SCIENCE! to get an Answer. So, here's a composite of a bunch of images I took yesterday in order to investigate something: Graph paper shot with several different lenses, to look for distortion of the images…

I've got a new series of Dinoponera photographs up at myrmecos.net. Click on the image above to see the gallery. These giant black insects are the largest South American ants, and although there is at least one Asian Carpenter ant (Camponotus gigas) that's a bit bigger, Dinoponera weighs in as…

Over at whatever, John Scalzi posts a lot of sunset photos. I don't get a lot of those, because for most of the year I need to be dealing with the kids-- wrangling them home from day care, making dinner, getting them to bed-- during the time when the sunset looks pretty. It's hard to appreciate the…

I'm looking for a small (will always live in Amanda's purse) point and shoot camera and have so far narrowed the choices down to the following. Anybody have any advice on which one I should get (or an alternative, if you'd like to suggest one)? (Descriptions/details are from Amazon, for consistency…

Which leads me to suggest photograph the ugly stuff. Everyone likes to photograph the beautiful stuff. Photographing the ugly stuff has a competitive advantage. If you ever want to capture history and the spirit of a time, it is the ugly, changing, transitory that captures time. Ugly, not as in bad photographs but as in decrepit, functional, industrial, commercial, advertising, and fashion trends showing the passage of time. Telephone poles, wiring, piping, textures, cars on the street, store fronts, crowds, anything you don't want in a picture.

What Lord said, perhaps with overly tight shots of only one part of what you are thinking of shooting. Like just one small part of the weather station, with nothing in focus from the background.