The image here of a pancake cooking isn't particularly interesting in its own right, other than as documentation of our weekend ritual at Chateau Steelypips. Saturday and sunday mornings, Kate sleeps in while the kids watch cartoons and I cook pancakes for them. SteelyKid absolutely drowns hers in maple syrup, then refuses to eat them, while The Pip regularly wolfs down two plain pancakes, eating with his hands: 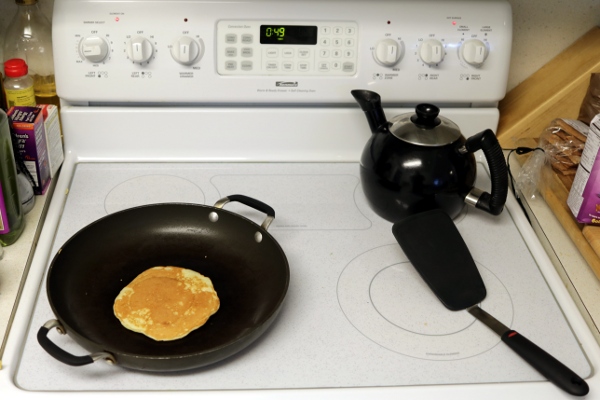 A pancake cooking at Chateau Steelypips.

As I said, this image isn't especially interesting, but it's here mostly as a teaser for a different thing, namely this thermal-imaging video of pancakes cooking:

You can see the initial pour, the slow warming up, and then the flip. Because what's the point of cooking breakfast and owning a Seek Thermal imaging camera for an Android phone if not to combine the two for nerdy breakfast fun?

If you don't have the patience to wait through that whole video, here's a much shorter clip of me testing the pan by sprinkling water into it:

This is one of the classic demonstrations of the Leidenfrost effect, where cold liquids on hot surfaces survive for a while as droplets supported on a cushion of instantly-vaporized liquid. You can see that in the thermal video, where the drops stick around for a bit; they actually don't skitter around quite as much as normal, possibly because the pan is a little too hot thanks to me mucking around with the camera.

So, anyway, there's your photo of the day, which is mostly an advertisement for your thermal-imaging video of the day. And now, I get to go coach SteelyKid's soccer team, whee!

Will that attachment work on any Android phone? May I ask what phone you have?

My phone is a Moto X from a few years back. I think it works on any Android phone, but you'd be better off clicking the Seek link and looking on their site. It's a cool gadget, though.

Thanks for the pointer to the IR camera. Our cast iron on the induction stove simply doesn't heat well and the pancakes are a mess to cook; clearly the iron isn't conducting the heat from the center to the edges. Even so, there is some kind of surface chemistry of the 'seasoned' iron, or maybe a temp threshold, that makes the pancakes stick sometimes, but not others.