Rhett is off at some sort of football game, but don't worry, I'll step up to make sure the Internet has pictures of kids playing soccer: 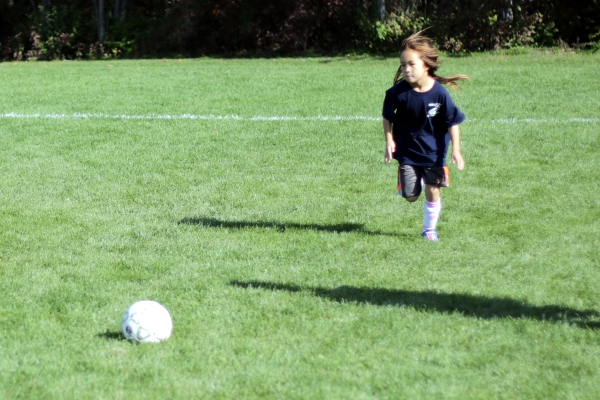 SteelyKid in action at rec soccer.

I'm assistant coaching the team (and the only coach for every other game), which makes it hard to get photos of SteelyKid, but I brought the camera to yesterday's game, and managed a few good shots. I try to avoid posting photos of other people's kids on the Internet, though, and this being second-grade soccer, it's not easy to get any photos near the ball where the frame isn't kind of crowded. So this cropped shot of SteelyKid dribbling is what we'll call the photo of the day.

(It was a good game, for the record, and other than a minor crisis where SteelyKid initially agreed to play goalie and then tearfully withdrew, she played well. They don't officially keep score at this level, but all the kids know how many goals were scored and by who, and they'll be happy to tell you.)

In the afternoon, we drove up to Schuyler Farms for the corn maze and various other fall activities, which was good fun but seriously exhausting. Which is why posting this picture was delayed to this morning, as predicted yesterday...

SteelyKid's second-grade class is doing a "Zoom Time" thing where the kids make short presentations to the class about one of their interests. It's basically an expanded show-and-tell, with fifteen minutes for talking, and five for "questions and compliments." She, of course, decided to talk about…

Since everybody I know on Facebook seems to have done this, it seems I'm obliged to post a list of twenty-five random facts. I wouldn't want to have my Internet License revoked, or anything. I've always been tall-- I'm not one of those tall people who was 5'7" in the tenth grade, and then shot up a…
Advertisment