Another delayed photo-of-the-day, because SteelyKid was sent home with strep throat yesterday. She complained that her throat hurt any time we asked her to eat anything other than ice cream, but other than that was basically unaffected. Which is sort of the most irritating sick-kid scenario possible, because if she were actually sick and listless, I could just put the tv on and let her doze on the couch while I worked. But instead, she was up and playing more or less as usual, skipping over to my computer regularly to interrupt me.

We had some fun-- watched Shaolin Soccer on DVD, and some of the fight scenes from Legend of Drunken Master (she was impressed, but I don't think she believes me that Jackie Chan does all that live, even after seeing the blooper reel in the credits)-- but it was also sort of frustrating. So at one point when she was building a Lego set, I went outside to do some frivolous and morale-boosting photo-a-day shooting: 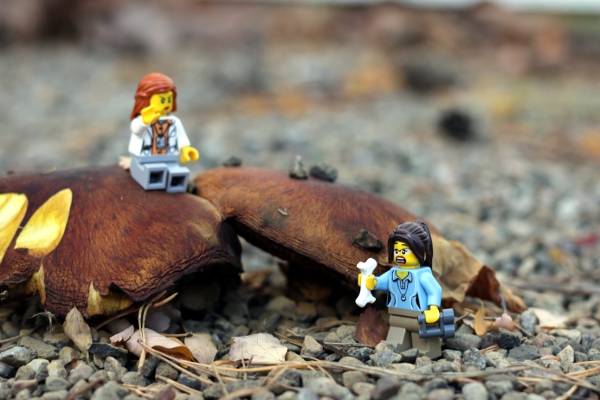 These big-ass mushrooms popped up in the gravel path from our back yard to the front, and I wanted something to give a sense of the scale. The minifigs seemed about right, and it amused me.

Today, she's home again, and we're going to see what she thinks of Star Wars. Starting with Episode IV, of course, because I'm not a monster...