The Pip is nute about superheros at the moment, primarily the Justice League, and particularly Batman. He's got quite the pile of toys around this theme, making for a decent photo subject: 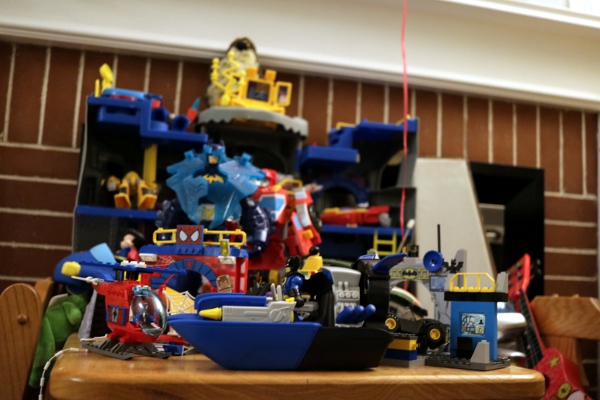 The Pip's collection of superhero toys.

Technically, these aren't all Bat-Toys-- you can see a Spiderman Lego set in there (from some alternate universe in which Peter Parker got Tony Stark to buy him a Spider-Copter) and also a few Transformers. But Batman holds down a pretty solid plurality in the toy population.

The Bat-Boat that's front and center in this shot (which ended up in the bathtub shortly after this was taken) is the most recent purchase, last week when he was home sick, and he was just over the moon about getting that. It's good to be an easily amused Little Dude.

Also, I introduced him to this:

Because I've been singing it at him for years, and getting baffled stares in response. Now, he knows this is a real song, and will periodically demand to watch it. Also the 60's-vintage Spiderman theme song. (That one, I don't have particularly strong associations with, but the Adam West Batman series was a staple of WPIX when I was a kid visiting my grandmother on Long Island. POW! BIFF! BAM!)

During the entire bath, all he sang was "Bat-boat!" on repeat. I do not exaggerate.