It seems appropriate to use a power-of-two day for a new digital device, so here's a photo of my new phone: 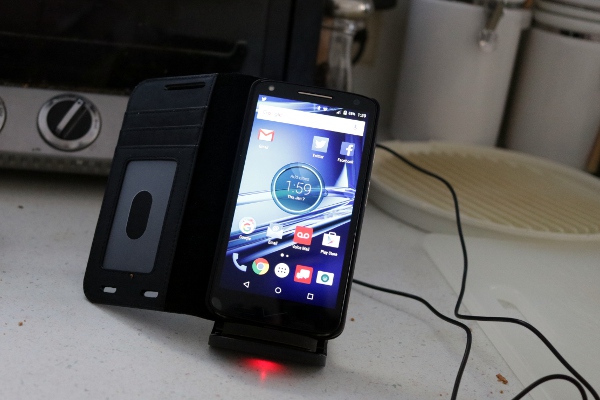 My new phone on the wireless charger.

Getting and setting this up took up much of yesterday. It's a Droid Turbo, which is basically the Verizon-branded version of the 2015 equivalent of the Moto X I had previously. Yes, I know, Verizon is kind of unpleasant, but I do just enough travel that the better coverage they offer matters to me. And one of the regularly-cited grievances against them, that they don't push out Android OS updates as often as other carriers, actually verges on a positive feature for me-- I really hate it when I get a decent workflow established, and then a software update moves all the buttons around and eliminates or changes features I use all the time.

Anyway, it's new, it's shiny, the wi-fi works (one of the reasons I needed a new phone is that the wi-fi crapped out on the old one ages ago, and updates that were big enough that the phone would only download them over wi-fi have been piling up. And I've been overrunning my data plan because everything went via that rather than using the home wi-fi network. I've had it for less than 24 hours, so I've still got a bunch of playing to do to discover new features, but right now, I need to get back to doing useful work.

Please follow up when you know the best ways to use the thing. I've got to give up my Treo some day, Verizon keeps trying to make it accept some kind of update that seems to kill the battery overnight.